Finding it hard to get the brain back into gear every morning? Kate Percy, author of Go Faster Food for Kids, brings you her top three performance-boosting “back-to-school” breakfast recipes, plus expert tips to turn your kids' breakfast into a nutritional powerhouse.
Login or Register to add to your saved resources

Did you know that the human brain is an active tissue containing billions of cells, called neurons, which need a constant supply of nutrients to function and grow properly? Recent studies at the Human Appetite Research Unit at the University of Leeds have proved that breakfast eating has a positive effect on children’s academic performance; children who skip breakfast have more difficulty focusing in class.

It stands to reason, really. Imagine a child’s body as a motor car. It needs fuel. Put the wrong type of fuel into the car, diesel instead of petrol for instance, and it will fail to function properly. Fill the car with the best quality fuel and the drive will be smoother and faster.

What's in the cereal cupboard?

Start the new term by reorganising the cereal cupboard. Sugary, processed cereals are 'fast-release' foods; they release their sugars into the bloodstream quickly and provide only short-term energy which will be followed by a dramatic slump. The kids will be hungry again by 10 o’clock, they’ll start to fidget in class, and they’ll lose concentration. Take a good look at the ingredients list on the pack – do you really want your child to eat these on a daily basis?

Try replacing these cereals with 'slow-release' cereals – porridge oats, wholegrain cereals, homemade granola (see recipe) – which release their sugars gradually and provide a steady stream of energy to the brain. Ditching sugary cereals might cause some wingheing initially, but give it a go... I guarantee you’ll see improvements in mood and concentration and fewer sugar ‘highs and lows’. Best of all, you’ll save money on your weekly shop!

Slow release carbohydrate is the name of the game at breakfast, but did you know that combining carbs with protein and fats at breakfast will reduce the rate at which carbohydrate is absorbed into the bloodstream and thus help sustain kids' energy (and therefore concentration) even more? It doesn’t have to be fancy! As in most houses, breakfast at Go Faster Food on a school morning has to be quick and easy. Try these quick fixes:

Healthy fats to boost the brain

Omega 3 fatty acids are found in oily fish, nuts, seeds and vegetable oils. They not only provide fantastic energy, but according to numerous studies carried out over the past ten years, a diet rich in omega-3’s can play a role in improving mood and brain development. I’m not suggesting fish for breakfast (although Usain Bolt is famed for eating a saltfish stew for breakfast, and, as a child, I was treated to sardines on toast for breakfast at least once a week!), but here are a few suggestions to boost your child’s intake of healthy fats at breakfast time:

These recipes are extracted from Kate Percy’s Go Faster Food for Kids. 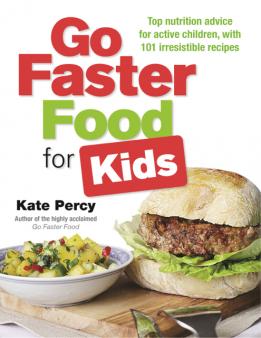