Looking for some screen-free, no-resources games to play at home or on the move? Primary school teacher Ivan Brett suggests word puzzles and number fun for the whole family in an extract from BORED? GAMES: 101 Games to Make Everyday More Playful. Pencil and paper at the ready!
Login or Register to add to your saved resources

What you'll need: Pencil and paper (or mini whiteboard and pens).

If you get stuck, you can decide to go back and swap an earlier word, or start again.

If you think of a word but it’s a little too short, see if you can add a suffix (‘ED’, ‘ING’, ‘LY’.) Having said that, watch out for words that end in Y. It makes things a little tricky...

Level up!
Try saying the words, in order, as if they’re a story. How much emotion and meaning can you convey with a list of nonsense? Alternatively, try writing a story containing all of the words that appeared in your list.

Use questions to find the secret number.

One player will pick a random number between 1 and 100. It is the other’s job to guess it, but only by using a series of maths-related yes/no questions. You may use the question suggestions below, but only one question using each suggestion. (Otherwise, the first one repeated enough times would always find the answer.)

If you get to the end of these questions and still don’t have the answer, it may be time to make up your own styles of questions. Just remember not to repeat the same one twice. Once you’ve guessed the number, it’s time to switch and try another round with different roles.

Tips: As soon as you’ve rounded the possible numbers down to something small, say, under twenty possibilities, write them down and begin to shave off the wrong ones. You can use a number square to cross off all the impossible numbers. Playing this in your head is possible, but makes it more of a memory game than anything.

Level up!
The number doesn’t have to be below 100 if you agree on this beforehand. Just get ready for a long game!

A word battle where the alphabet is your weapon.

What you'll need: Pencil and paper

A tactical countdown game where you’re trying to be the one to make the final move. So if strategy gets you going, read up about a thing called combinatorial game theory. If not, let’s play a game!

Level up!
If you do want a one-player challenge, start with any letter of the alphabet and try to get back to that letter in as few words as possible. You could even work as a pair or a group to find the shortest sequence.

A brain exercise that only ends when you get a headache.

What you'll need: One fresh brain

There was an exceedingly popular app a few years ago called ‘2048’. It involved sliding tiles around until they matched, merged and doubled, with the intention of reaching 2048. It was beautiful and addictive, and best of all, people have been been playing this long before smartphones. Here’s how.

If you were to take a piece of paper and fold it in half forty-two times, it would be tall enough to reach the moon. This is the power of multiplying. What starts as tiny increments soon becomes gargantuan, which makes every further step a bigger challenge. It’s why I love this game so much.

Level up!
I wouldn’t try tripling a number (too messy!) but start on three and double that continually. Watch how it hops from odd to even and back again. Isn’t that neat?

If you have two players, double the other player’s number to stay in the game. First to lose track does the washing up!

Break words apart and stick them together in this linking game.

What you'll need: Pencil and paper (or mini whiteboard and pens).

Level up!
Tell a sentence to begin a story containing your compound word. Stress it, so that your opponent knows which one you meant, and then they must add a sentence containing their linking word. Continue until the end of the story.

Roll a dice, fill a grid, win a game.

What you'll need: Pencil and paper for each player and a six-sided die.

This simple maths game requires knowledge of column addition. If you don’t know how to do that, get a child to teach you. They’re experts.

Each player should draw a 3 x 3 grid of boxes, like this. 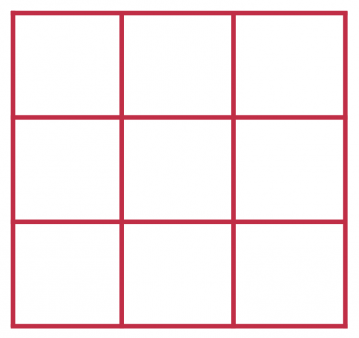 One player will roll a die nine times. Each time, all players fill the rolled number into one of their boxes; you choose which box to put each number in. Once every box is filled, your grid should look like this: 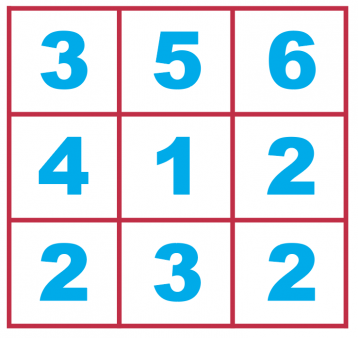 Now to tally it up. Each row becomes a three-digit number (so the above grid has the numbers 356, 412 and 232). Add them up using column addition, writing the total below. The closest to 1000 wins the round.

Tip: Because everyone gets the same nine numbers to put in their grids, the real skill is in choosing where to put them. Remember that everything in the left-hand column is worth hundreds, everything in the middle is worth tens and everything on the right is worth ones. Being a little too high on the right-hand column might leave you just a couple away from 1000. Being too high in the left column might make you miss by hundreds!

More screen-free games to play with the family

If you've enjoyed this extract from BORED? GAMES: 101 Games to Make Everyday More Playful by Ivan Brett (£9.99, Headline Home), invest in the book for 95 more ideas to keep you entertained! The rules are presented in the simplest, most playful form possible, so that you can get started with barely any learning, preparation or resources. 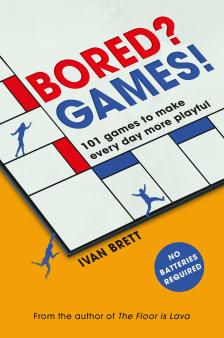