What is a clause?

From Year 1 onwards children are taught to write sentences made up of two clauses as part of sentence-level literacy work in the classroom. We explain everything you need to know about main and subordinate clauses in parent-friendly language.
Login or Register to add to your saved resources

What is a clause?

Clauses are the building blocks of English sentences, groups of words that contain a subject and a verb.

To understand clauses, it is a good idea to review the different components that make up a sentence.

Words are the smallest units of meaning, for example:

Phrases are small groups of words intended to convey meaning, such as:

A clause is a group of words that contain a subject (the noun or pronoun about which something is being said, usually the doer of the action) and a verb (a doing word).
An example of a clause is:

The fast, red squirrel darted up a tree.

The subject of this clause is the fast, red squirrel and the verb is 'darted'. This can also be called a simple sentence.

What is a main (or major) clause?

A main clause is a clause that contains a subject and an object. Main clauses make sense on their own. 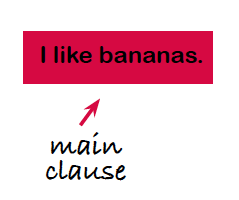 'I like bananas.' is a simple sentence which is made up of a main clause.

Sometimes a sentence is made up of two clauses: a main clause and a subordinate (or dependent) clause, which relies on the main clause.

What is a subordinate clause?

A subordinate clause contains a subject and a verb, but it needs to be attached to a main clause because it cannot make sense on its own. For example:

This is a complex sentence (also referred to as a multi-clause sentence). It has a main clause ('I first saw her in Paris') and a subordinate clause (' where I lived as a small child'), which relies on the main clause to make sense. The two clauses are joined by the connective 'where'.

Connectives that join clauses can be conjunctions, prepositions and adverbs.

Examples of subordinate clauses include embedded clauses and relative clauses.

Main clauses don't always have to come before subordinate clauses in sentences. For example:

When do children learn about clauses?

In Year 1, children are expected to write sentences with two clauses joined by the word 'and.'

In Year 2, children start learning about subordination and coordination and need to start using a main clause and subordinate clause (a complex sentence), joined by 'when,' 'if,' 'that' or 'because.'

In Years 3 to 6, children are expected to continue to use a range of simple, compound and complex sentences, however their connectives need to become more sophisticated, for example: 'because,' 'although,' 'therefore,' 'meanwhile' and so on.

By Year 6, they need to be able to understand the following terms:

They may be tested on these in the KS2 SATs Grammar, punctuation and spelling test at the end of Year 6.