In KS2 children often analyse figurative language when reading poetry and fiction. Personification, or giving a non-living object human characteristics to describe it, is a common technique children will study and learn to use in their own writing.
Login or Register to add to your saved resources

Children in Key Stage 2 start to think about how writers use figurative language to create effect in their writing. One type of figurative language is personification, which is giving an object human characteristics (emotions, sensations, speech, physical movements).

Examples of personification for children

The cruel waves crashed mercilessly and swallowed the poor swimmer.

Here, the writer describes the waves using human attributes, 'cruel' and 'merciless'. The waves are also given a human physical process, swallowing, when waves cannot literally swallow something.

Those flowers are crying out for water.
This expression is designed to tell us that the flowers need watering, but it implies the flowers have a voice. It also makes the sentence quite emotional, perhaps as a way of conveying urgency (someone needs to do something about the flowers quickly!).

When are children taught personification?

Teachers will start to mention personification to children in Key Stage 2 (probably around Year 4 or 5).

Personification is usually taught through poetry. A teacher might start by showing the children a poem such as this one: 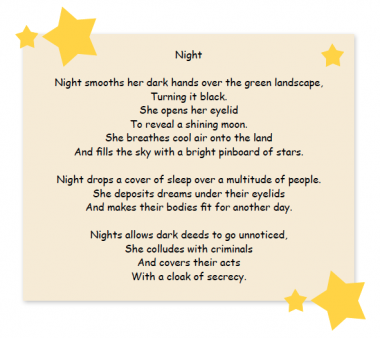 Children might be asked to give examples of personification in the poem. For example:
Children would probably need to study a variety of poems before they would be ready to start writing their own personification poem. A teacher would either think of an object to encourage the whole class to write about, or they might allow children their own choice. They might prompt the children with questions about all the different aspects of a human being and how you could relate this to the object. For example:
Children might brainstorm these ideas on a spider diagram and then start drafting their poem.