The world's greatest cat burglar, high-tech gadgets, mad scientists, kidnapped dragons, a mysterious island and a world full of monsters make these books for nine year olds the perfect choice for sharing and reading together. Even better news: lots of them are part of a series. We see lots of family reading sessions in your future...
Login or Register to add to your saved resources 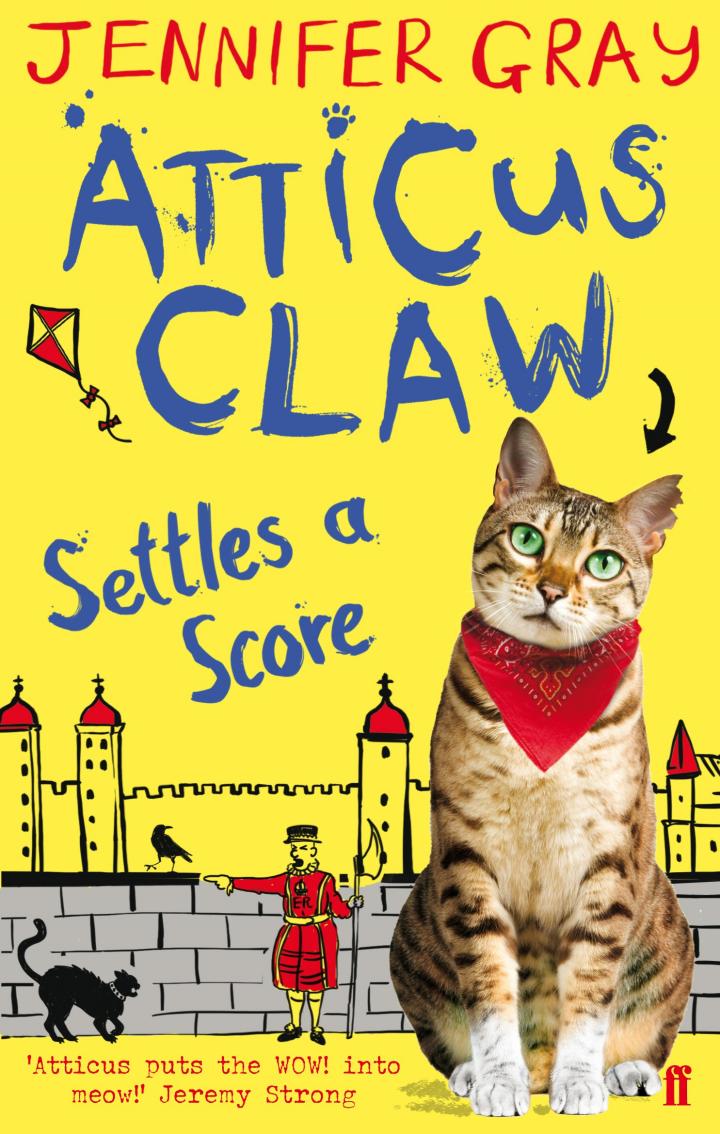 Atticus Grammaticus Cattypuss Claw – formerly the world's greatest cat burglar – is on holiday in London with the Cheddar family. However, Atticus is finding it difficult to relax – he still has a score to settle and is desperate to put his arch-rival, Ginger Biscuit, behind bars. On the other side of London, in Her Majesty's High Security Prison for Bad Birds, Jimmy Magpie and his gang of crooked birds are planning their escape.

When a mysterious old lady busts the gang out of prison, Atticus vows the catch them and bring them to justice. Atticus will need all his cunning and bravery to catch the birds, prevent a terrible crime and settle a personal vendetta – but it's all in a day's work for the cleverest cat in town! A brilliant adventure, with plenty of mystery, twists and turns. 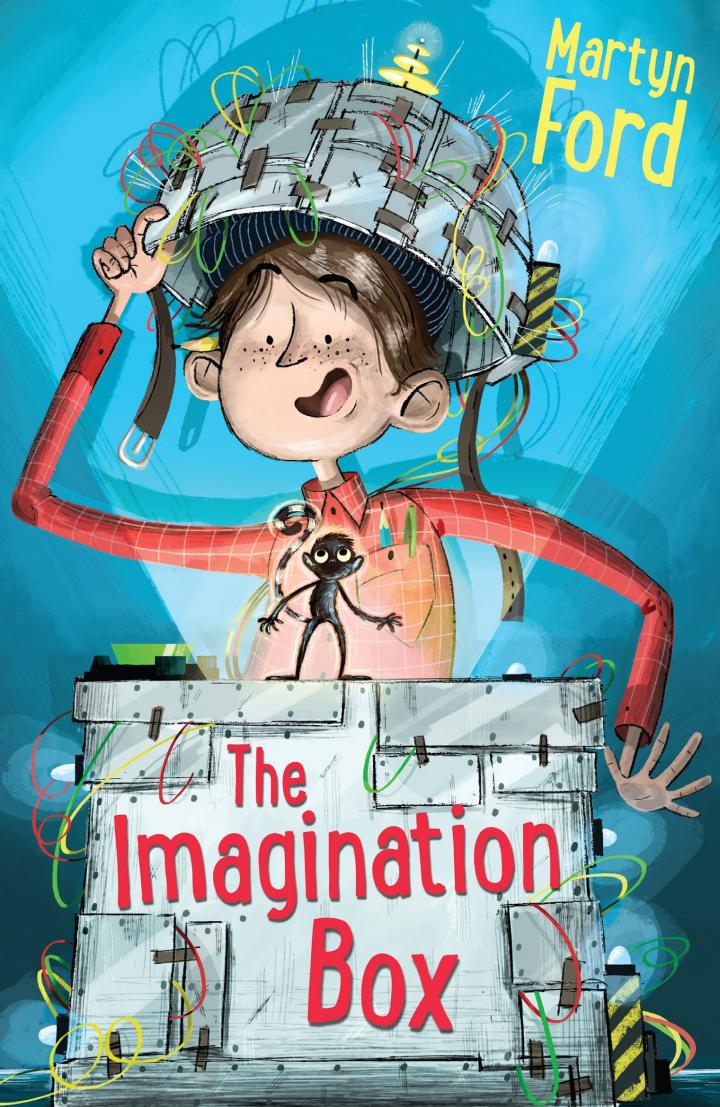 The Imagination Box by Martyn Ford

There is a box and inside this box anything you imagine will appear. You have one chance to create anything your heart desires – what will it be?

It's the first week of the summer holidays and Tim is wiling away the days at The Dawn Star Hotel when he meets a mysterious old man wearing a lab coat. It turns out this man is in fact Eisenstone, an inventor who has created 'A thought-directed atomic construction device' or… an 'Imagination Box'! Surely this is the greatest toy ever invented? Just think of all the possibilities for endless creation and invention! When Professor Eisenstone goes missing, Tim knows he must investigate… This book is the first in an exciting new trilogy and offers young readers a thrilling adventure chock full of high-tech gadgets, tense moments of intrigue and plenty of humour. 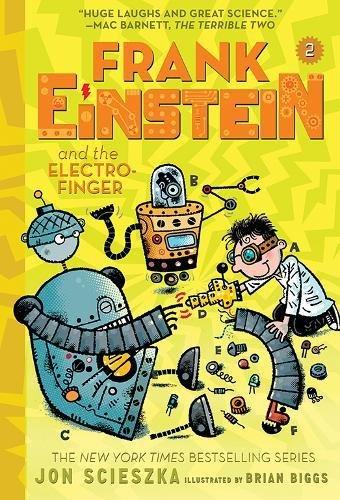 Frank Einstein and the Electro-Finger by Jon Scieszka

Frank Einstein is a genius, scientist and mad-cap inventor. With the help of Klink (an artificial intelligence entity) and Klank (an artificial almost intelligence entity), Frank creates the amazing Electro-Finger. The Electro-Finger promsies to deliver free wireless energy to all of Midville. Meanwhile, T.Edison and his evil side-kick Mr Chimp are busy concocting a devilish plan that may derail Frank's schemes and lead to disaster for the whole of Midville. This cheerful, tongue-in-cheek book is perfect for any children who are interested in science, experiments and inventing. There's plenty to explore and look at on each page. Brian Biggs's illustrations, scientific diagrams and drawings are lively and amusing too and this is sure to appeal to reluctant readers too. 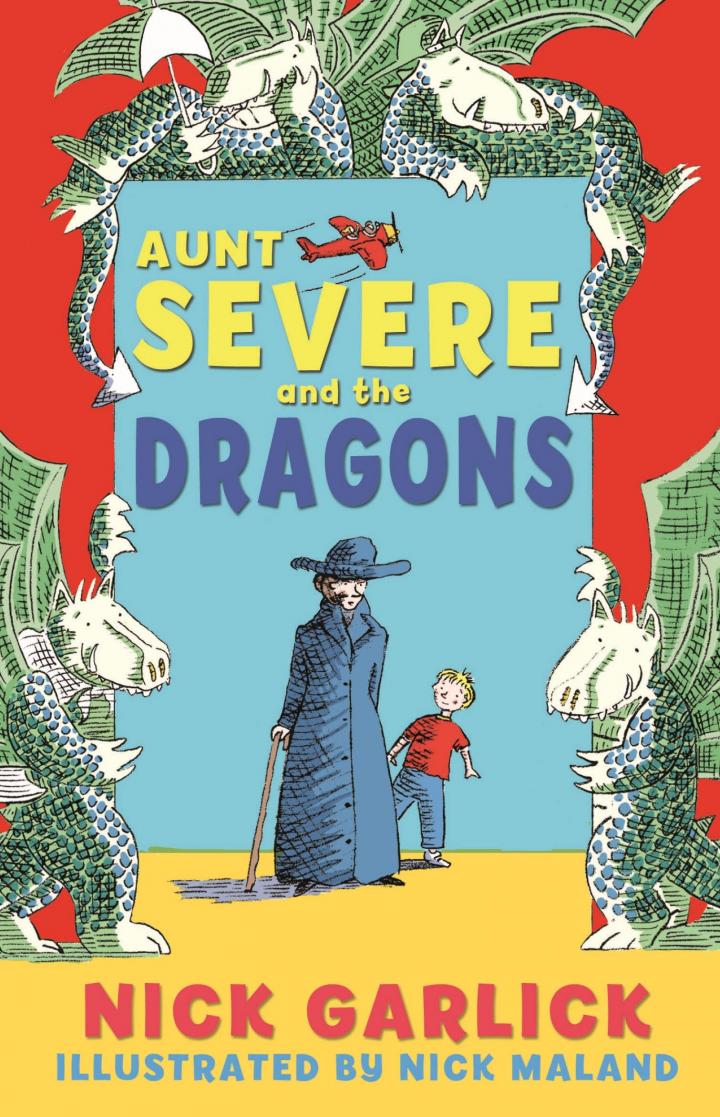 Aunt Severe and the Dragons by Nick Garlick

When he is eight, Daniel's parents vanish while exploring the world. Daniel has nowhere else to go and is forced to live with his Aunt Severe. If course, that isn't her real name, but due to her gloomy, grim nature it seems the perfect moniker for his strange aunt, who feeds him cold spinach sandwiches for tea and wakes him at 4.30am to begin his daily chores. One day, Daniel is cutting down nettles in his aunt's horrible garden when he finds four creatures with scaly wings sitting in a tree above him… dragons! Daniel soon befriends the dragons but the nasty Gotcha Grabber, who wears filthy overalls and dirty wellington boots, kidnaps the dragons and takes them to 'The World's Smallest Zoo' where they're jammed into tiny cages and treated terribly. Can Daniel rescue them? This is a great story, full of quirky humour and larger-than-life characters. The next book in the series, Aunt Severe and the Toy Thieves and is well worth a read too. 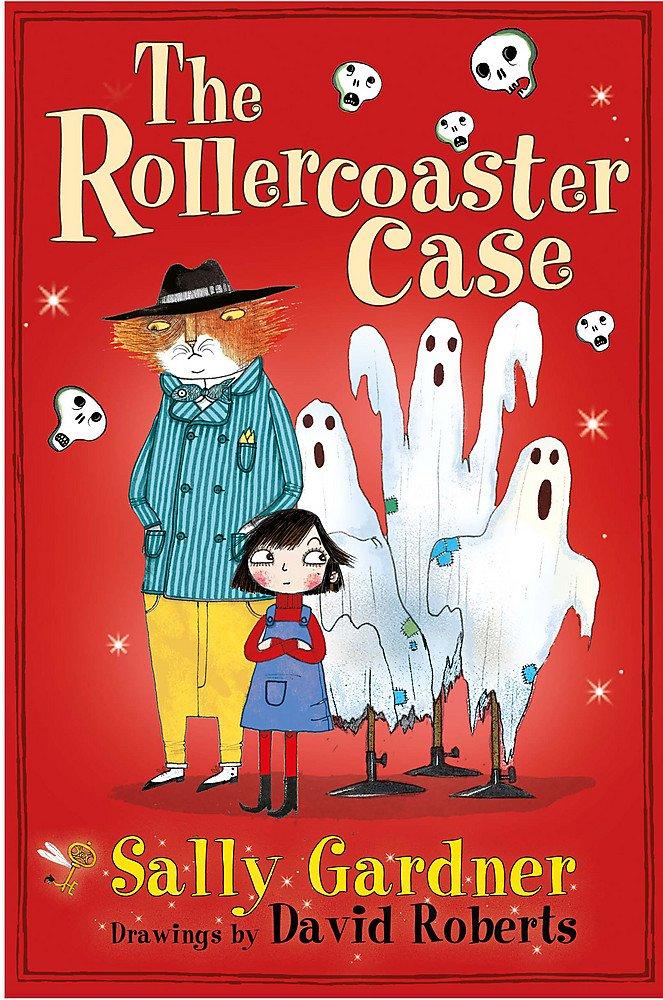 The Rollercoaster Case (The Fairy Detective Agency) by Sally Gardner

The renowned fairy detective agency, Wings & Co, have a problem. A ginormous problem! The giant, Billy Buckle, has disappeared and left his daughter, Primrose, in the care of Emily Vole and Fidget the Cat. Primrose seems to be growing every single day and unless the detectives can find Billy, poor Primrose won't be able to go in and out of the shop! But as Emily and her amusing side-kicks soon find out, nothing to do with fairy folk is ever simple! This is a huge amount of fun – the characters are zany and delightful and the story zips along at a frenetic pace, with plenty of nods to the classic fairy tales along the way. Thoroughly enjoyable! 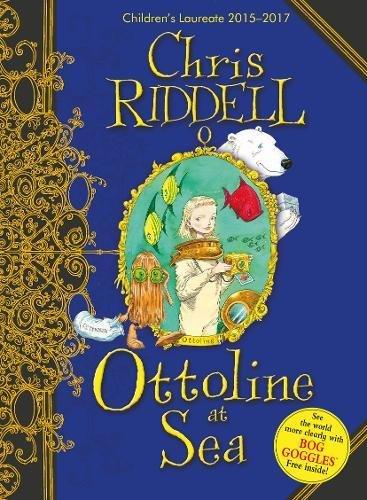 Ottoline at Sea by Chris Riddell

Chris Riddell was the Children's Laureate from 2015-2017 and is not only an accomplished author, but an excellent artist and illustrator too. Ottoline lives on the 24th floor of the Pepperpot Building with Mr Munroe, who is small and hairy and doesn't like the rain or having his hair brushed. The two are inseparable, so when Mr Munroe voyages to Normal on his own in search of Quite Big Foot, the Abominable Troll of Trondheim, Ottoline is distraught! She sets off to find her beloved friend and on the way has a tour of the Polar Bear Shoe Company, tries deep-sea diving and even travels in a seaplane. Will Ottoline be able to catch up with her beloved friend before he comes face to face with the eight foot tall, snuggle-toothed troll? Each page of this book is a treat – beautiful illustrations and amusing visual jokes sit alongside an engaging, lovely story, eccentric humour and peculiar characters. 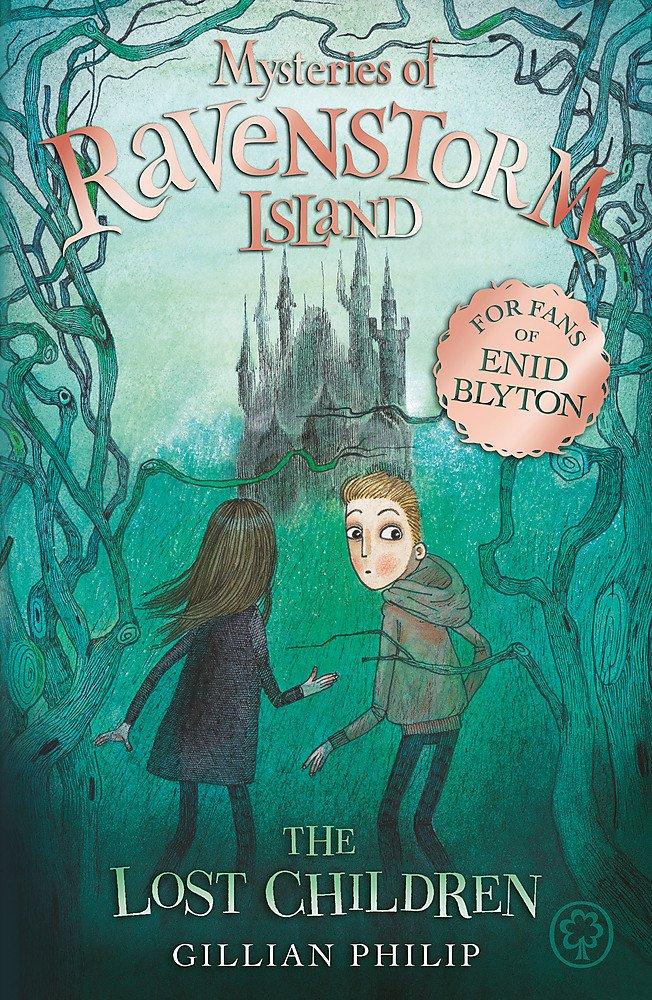 Mysteries of Ravenstorm Island: The Lost Children by Gillian Philip

Perfect for fans of Enid Blyton! Molly and Jack spend most of their holidays apart from their parents, who form the Incredible Cornells magic act and work throughout the holiday season in resorts and hotels. This year, however, they are spending their summer with the Wolfreys at Ravenstorm Hall. When Jack vanishes, a dangerous mystery is uncovered on Ravenstorm Island – frightening monsters plague the island and are out for revenge. It's up to the children to save the day! An engaging, thrilling story full of adventure and well-rounded characters. 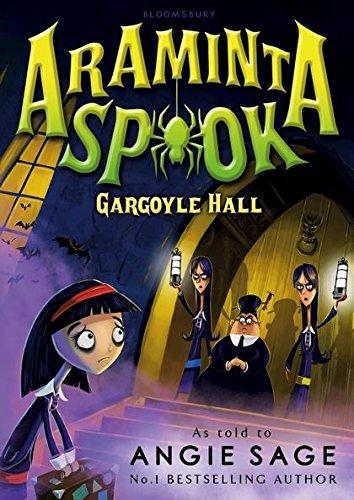 Araminta Spook is the Chief Detective at the Spook Detective Agency and knows only too well that running your own detective agency is full of danger and trouble. Weeks can go by without any kind of mystery and then, just like buses, several mysteries come along at once! But they won't be easy or simple to solve because Araminta has been packed away to a boarding school called Gargoyle Hall, a spooky, strange place where terrifying moans fill the corridors and the two Head Girls are just as creepy. Can Araminta solve the mysteries that haunt her new boarding school and uncover the sinister reason why most of the students have been frightened away? This story has plenty of twists, action and surprises and Araminta is an engaging, intelligent lead character. The central mystery will certainly appeal to readers in this age group, as will the appealing cast of characters and the many jokes and spooks along the way. 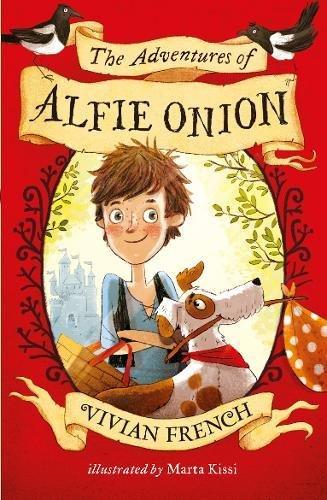 The Adventures of Alfie Onion by Vivian French

"Long, long ago, when trolls lurked in deep dark forests and ogres grumbled and mumbled beyond the distant hills, there was a small and ordinary village called Guttersby…" So begins this wonderful story, which follows the adventures of Alfie Onion and his spoilt brother, Magnifico, who live on Pigsticking Farm. Magnifico rather reluctantly sets off one day to make his family's fortune. Magnifico, however, isn't really the type of boy who enjoys adventures – he hates heights, is scared of everything and refuses to carry his own luggage. So Alfie tags along, carrying his brother's luggage, and ends up saving the day on more than one occasion! With the help of his loyal, trust-worthy dog Bowser and some cheeky, mischievous magpies, Alfie must out-smart some ogres and save a princess, whilst also trying to keep his brother out of trouble. This is a fresh, witty, light-hearted take on the classic fairy-tale. Alfie is an appealing character – brave, intelligent and humble, and the adventure is sure to engage young readers. 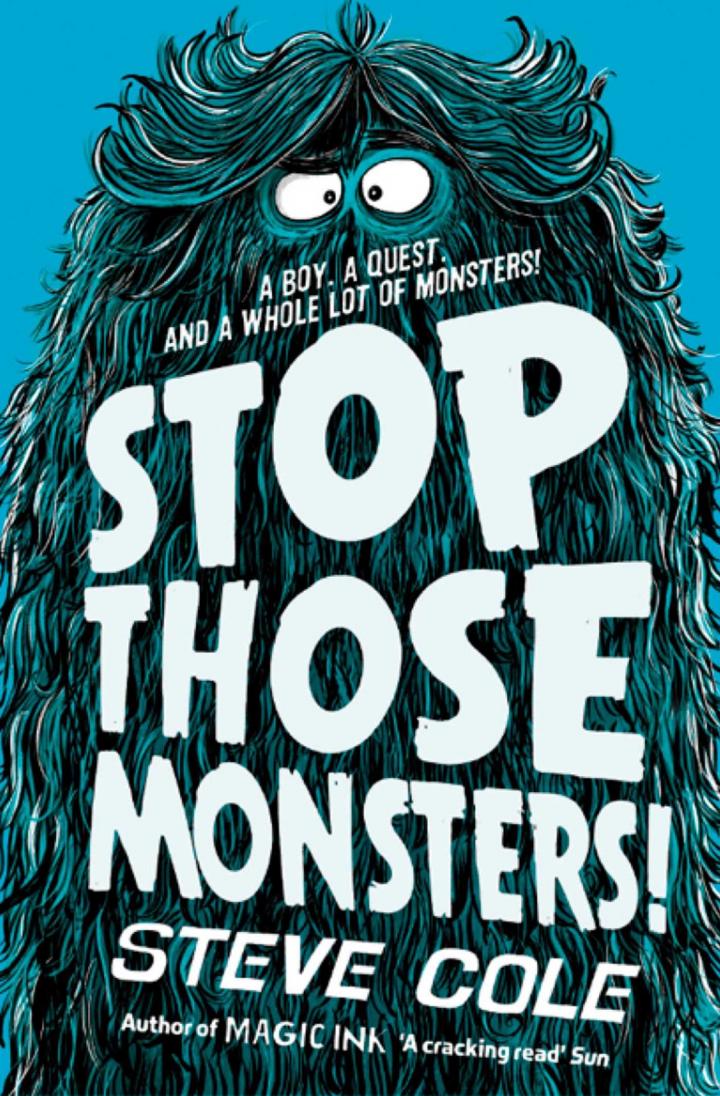 Stop Those Monsters! by Steve Cole

Long ago, monsters roamed the earth, squelched across the land and lurked in seas. But have you ever wondered where all those monsters went? You're about to find out! When Bob's house is kidnapped by a crazy hurricane, he finds himself in a world full of… things! These things are actually monsters of all shapes, sizes and colours. Bob soon befriends Verity, a huge, toga-wearing hamster, Alfie (who really isn't that frightening after all) and Zola, a gorgon who can only turn people into strange things, such as porridge. The friends embark on an epic quest to uncover the Star Jewel and return Bob home, but everywhere they turn there are monsters, monsters and more monsters! Things are certainly about to get monstery... This is great fun: silly, exciting and clever.