From condensation to the water cycle, TheSchoolRun's primary-school science glossary offers a complete guide to all the concepts children are taught in EYFS, KS1 and KS2 science. Brush up on your own science knowledge, clear up homework confusion and understand exactly what your child is learning at school by reading our basic definitions (with links to more detailed explanations, teachers' tips and examples).
Login or Register to add to your saved resources

You'll find basic definitions of important primary-school science terms below. For a much more detailed, parent-friendly guide to how children are taught about each of these concepts in science, as well as examples, click on the link in the word.

Adaptation is the process by which living creatures (animals and plants) adapt or evolve to survive in their environment and to live amongst a specific group of other living things.

Air resistance is the force on an object moving through air. Air resistance affects how fast or slowly objects move through the air.

In an electrical circuit, the battery is the cell that makes electricity.

Canines are teeth used for tearing and ripping food. Children learn about them as part of their study of teeth and how to take care of them.

Carnivores are animals who eat mainly meat and hunt their prey.

A circuit is a closed loop for electricity to travel around. In primary school children learn about simple series circuits in which a single wire runs from a battery to a bulb and back again.

The circulatory system is is the network of organs (including the heart) and vessels that allows the flow of blood, nutrients and oxygen around the body.

Condensation is to turn from a gas into a liquid. In the water cycle, the evaporated water in the air cools and turns back into a liquid.

A conductor is an object that allows electricity to flow through it easily. Objects made of metal are good conductors.

Within a food chain, a consumer consumes a producer (usually a plant) or another consumer by eating it. Consumers can be primary, secondary, tertiary, etc consumers depending on their position in the food chain. Consumers are also called predators of the animals they eat; animals eaten by other animals are prey.

Current is the amount of electricity flowing through a circuit. It is measured in amps.

The digestive system is made up of all the organs that help the body break down and process the food we eat.

Dissolving is a way of mixing a solid and a liquid. When a solid dissolves in a liquid it creates a solution.

Electricity is a form of energy caused by electrons moving about.

Evaporation is the process by which a liquid, when heated, changes into a gas and rises into the air. Evaporation is part of the water cycle as water from the earth’s seas and oceans evaporates when is heated by the sun’s rays.

Evergreen trees (conifers) are those that keep their leaves all year around; they often have leaves shaped like needles.

A fair test is a controlled investigation used to answer a question in a scientific way.

Filtering is a method of separating mixtures of solids and liquids.

A food chain is a diagram that shows us how animals are linked by what they eat.

A food web is a set of linked food chains.

Forces are the pushes and pulls which act on our bodies and the things around us to make things move and stop moving.

Freezing is the process of changing a liquid into a solid.

Gas is one of the three states of matter on Earth. A gas can flow, expand and be squeezed.

Germination is the process of a seed starting to grow to create a new plant.

Gravity is the pulling force acting between the Earth and a falling object. Gravity pulls objects to the ground.

A habitat is a home environment for plants and animals or other organisms.

Hernivores are animals whose diet mostly consists of plants.

Igneous rock is one of the three kinds of rock present on Earth. It is formed when magma or lava from volcanoes cools; basalt and granite are both igneous rocks.

Incisors are teeth used for biting and cutting food. Children learn about them as part of their study of teeth and how to take care of them.

An insulator is an object that does not allow electricity to flow through it easily. Rubber, paper and some plastics are good insulators.

Animals who don't have a bony skeleton are called invertebrates; insects, spiders and crabs are invertebrates.

A life cycle is the different stages of life for a living thing.

Light is the energy that allows us to see the world. A light source makes light by using another kind of energy (for example heat or nuclear energy).

Liquid is one of thre three states of matter on Earth. A liquid forms a pool, flows or runs but it can't be stretched or squeezed.

A magnet is an object that has a magnetic field (an invisible pattern of magnetism). A magnet attracts or repels other items.

Magnetism is a force caused by the electrons in the atoms that make up everything around us.

Materials are the matter or substance that objects are made from. Examples of materials are metal, plastic, wood, glass, ceramics, synthetic fibres and composites. Different materials have different features, or properties, which make them suitable for different uses.

Matter makes up our planet and the whole universe. On Earth, all matter exists in one of three different states: solid, liquid or gas.

Melting is the process of changing a solid into a liquid.

A micro-habitat is is a very specific, small home environment (like a tree or a pond) for plants, animals and insects.

Molars (and pre-molars) are teeth used for grinding and crushing food. Children learn about them as part of their study of teeth and how to take care of them.

A moon is a celestial object that orbits a planet.

Metamorphic rocks like slate or marble are formed when other kinds of rock (igneous or sedimentary) are changed due to heat or pressure.

Ominivores are animals who eat a mixture of plants and meat.

Things are opaque if light cannot pass through them.

Photosynthesis is the process plants use to make food from sunlight; it also requires carbon dioxide (from the air), and water (from the soil).

Pitch is the quality of a sound. Depending on how fast or slowly something vibrates a sound's pitch with be high or low.

A planet is a celestial object that orbits a star like our solar system's Sun.

Precipitation is rain, sleet, hail and snow, the water droplets which fall from the sky.

Within a food chain, a producer (usually a green plant) passes energy on to a consumer (an animal who eats the plant) through carbohydrates and proteins.

Reflection is when light hits the surface of an object and then that light travels to our eyes so we can see. Mirrors catch light rays in front of them and throw it back in the direction it came from.

The four seasons (autumn, winter, spring, summer) we experience on our planet are caused by the Earth's tilt as it rotates around the Sun.

Sedimentary rocks like sandstone or chalk are formed over millions of years when sediments (tiny pieces of rocks and organic matter) are pressed together.

A shadow is the darkness formed when light rays cannot pass through something.

Sieving is a method of separating mixtures of solids and liquids.

Solid is one of the three states of matter on Earth. A solid can hold its shape.

Sound is created when something vibrates and sends waves of energy (vibration) into our ears.

Matter makes up our planet and the whole universe. On Earth, all matter exists in one of three different states: solid, liquid or gas. Depending on its temperature, matter can change state; heating, cooling, evaporating and condensation are ways in which a material changes state.

A sun is a star, a giant ball of hot gas. Our Sun makes life possible on Earth.

Surface resistance is the force on objects moving across a surface.

A switch turns an electrical circuit on or off by starting or stopping a current flowing.

Things are transparent if most light can pass through them.

Vertebrates are animals with backbones / skeletons and include amphibians, birds, fish, mammals and reptiles.

Voltage is the amount of electrical energy used. It is measured in volts.

The water cycle is the continuous journey water takes from the sea, to the sky, to the land and back to the sea.

Water resistance is the force on objects floating on or moving in water.

Buy a downloadable and printable version of the complete Primary Science Glossary for £2.99 in TheSchoolRun Bookshop. 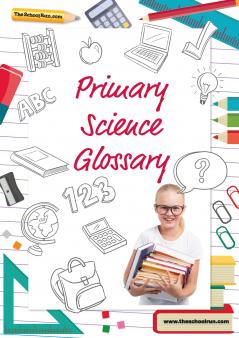