Spotting the signs of sepsis in children

It's known as the 'silent killer,' but would you know the symptoms to look out for? We explain everything parents need to know about sepsis.
Login or Register to add to your saved resources

Every parent knows how quickly bugs can spread in the primary school classroom. It sometimes seems as if our kids have barely recovered from one illness before the next one strikes.

Most childhood coughs, colds and stomach bugs get better by themselves, but sometimes, children can become very ill, very quickly.

That’s why it’s vital that we all know how to spot the signs of sepsis: a life-threatening condition that affects around 10,000 children every year.

Sepsis is a condition that can be triggered by an infection in any part of the body, such as a chest infection, bladder or urinary tract infection, or an infection developing from a cut, graze or bite.

It happens when the immune system has an extreme reaction to the infection.

It goes into overdrive and attacks the body, causing a dangerous drop in blood pressure.

This can prevent oxygen from reaching its tissues and organs, sending the body into septic shock, which is potentially fatal.

Young children are one of the highest risk groups for developing sepsis, so it’s important to keep a close eye on them, especially if they’re unwell with a bug or infection.

According to The Sepsis Trust, a child who is unwell and has, or has in the past 24 hours had, a high temperature (over 38C) or low temperature (36C or below: check three times in a 10-minute period) and also has the following symptoms may have sepsis:

These symptoms indicate a medical emergency, and should be treated as seriously as a heart attack.

If a child of any age has any of these symptoms, take them to A&E or call 999 for an ambulance. Ask the question, ‘Could it be sepsis?’

Children under five may have sepsis if they develop these symptoms:

If they have these symptoms and seem to be deteriorating or are more unwell than you’d expect, see your GP urgently or call 111 for medical advice, and ask if it could be sepsis.

Other signs to look out for

Sepsis can be hard to spot, because in the early stages, it may look like a run-of-the-mill childhood bug.

The following symptoms may be signs of sepsis. If your child has any of these symptoms, is getting worse or seems sicker than you’d expect, seek advice from your GP or call 111.

The most important thing is to trust your instincts. As parents, we often have a sixth sense that something is wrong with our children, and in the case of sepsis, that gut feeling often turns out to be correct.

Don’t think that you’re wasting the doctors’ time: they would always rather assess a child just in case, than have them become dangerously unwell because they weren’t seen in time.

Most children with sepsis will need to be admitted to hospital – either to a children’s ward or to the intensive care unit, depending on the severity of their condition.

Although your child will have tests to confirm whether or not they have sepsis, if the condition is suspected, they’ll most likely begin treatment before the results are back.

This is because the outlook is best if treatment is started as soon as possible.

Treatment involves giving them intravenous antibiotics and fluids, and oxygen if their levels are low.

Intravenous treatment is usually given for two to four days, then replaced by oral antibiotics, but your child is likely to be kept in hospital until the doctors are certain that they’re well on the road to recovery.

As long as your child was treated with antibiotics promptly, they stand an excellent chance of recovering from sepsis.

Some children bounce back, but others take longer to recover, particularly if their condition was severe and they spent a long time in hospital.

They may suffer from fatigue, breathlessness, muscle weakness, chest pain and swollen joints for some time.

This may delay them going back to school, so it’s important to keep communicating with their teacher so their return can be managed properly, balancing their educational needs with their ongoing health issues. 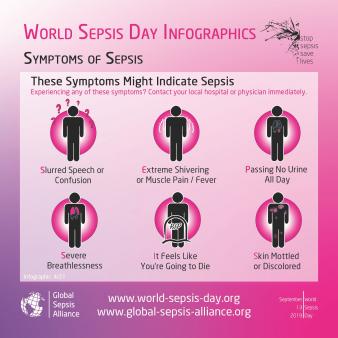