What are exception words?

As your child learns to read you might hear them talk about the 'exception words' they are learning. We explain what exception words are, what role they play in phonics learning and how you can support your child's developing reading and spelling skills at home.
Login or Register to add to your saved resources

What are common exception words or tricky words?

Exception words are words in which the English spelling code works in an unusual or uncommon way. They are not words for which phonics 'doesn't work', but they may be exceptions to spelling rules, or words which use a particular combination of letters to represent sound patterns in a rare or unique way.

Exception words are also referred to as tricky words or sight words.

Some exception words are used very frequently, which is why children are introduced to them very early on in their phonics learning (in Reception, alongside high frequency words, and in Key Stage 1).

How are common exception words taught in Y1 and Y2?

English has a complex spelling system in which the same letter (or letters) can be used to represent different sounds and the same sound can be represented by different letters.

As children learn to read within a structured phonics method all these different phoneme (spoken unit of sound) and grapheme (the written symbol that represents a sound) correspondences are explained, and the 2014 English curriculum has set out the various spelling rules (and exception words) that need to be learnt by children in each year of their primary education.

Examples of exception rules are:

Examples of exception words are:

Year 2
door, floor, poor, because, find, kind, mind, behind, child, children*, wild, climb, most, only, both, old, cold, gold, hold, told, every, everybody, even, great, break, steak, pretty, beautiful, after, fast, last, past, father, class, grass, pass, plant, path, bath, hour, move, prove, improve, sure, sugar, eye, could, should, would, who, whole, any, many, clothes, busy, people, water, again, half, money, Mr, Mrs, parents, Christmas – and/or other words, depending on the phonics learning programme used in your child's school

How are children taught exception words?

The number and order of exception words your child will be taught will vary according to the phonics programme being used in their school. Also, some English words are exceptions in some regional accents but not in others.

In the classroom practical strategies will often be used to introduce children to specific groups of exception words.

How tricky words are introduced in the classroom

Help your child practise reading and writing exception words with our flashcards, free to download. 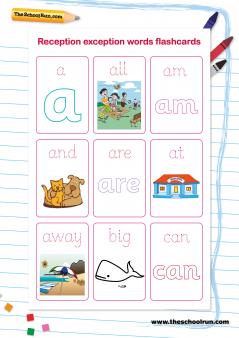 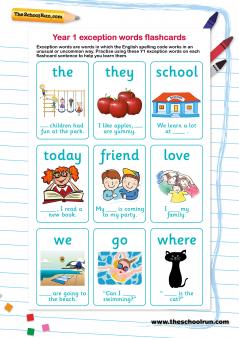 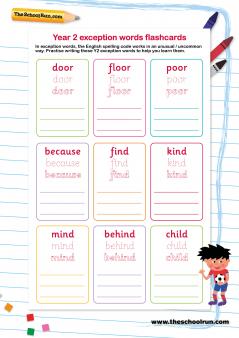 How children learn to read using phonics: a parent's guide

Understand more about how children are taught to read with our step-by-step parents' guide to phonics teaching.

More advice, information and practical resources to help primary-school children with phonics and reading are available on our subject hub page.