We explain what capacity means and how children are taught to understand the concept in KS1 and learn about the relationship between millilitres and litres, and in KS2 use decimal notation to record the capacity of water and convert between units of measurement.
Login or Register to add to your saved resources

Capacity is the total amount of fluid that can be contained in a container. It is the word we use when we are measuring liquids. We might say: 'What is the capacity of the liquid in that cup?' to which an answer would be given in millilitres.

Measuring capacity in KS1 and KS2

Children start learning about capacity in Key Stage 1, where they might be asked to work out how many cupfuls of water will fit in an empty jug. In Year 2 they will start to talk about millilitres and litres and would be shown what a litre of water looks like. They also learn that a litre of water can look different depending on the container it is put in. They will be asked to measure amounts of water in millilitres, using a measuring jug or cylinder.

In Year 3 children start to learn about the relationship between millilitres and litres. They are taught that there are 1000 ml in one litre. They are also given activities to do, involving measuring amounts of water in a measuring jug in millilitres. They might be given a picture of a measuring jug where the water is shown to be halfway between the 100ml and 200ml marks and asked to say how much water is in the jug. Children in Year 3 are also given capacity problems to solve  involving comparing, adding and subtracting measurements of liquid.

In Year 4 children start to be taught about using decimal notation to record capacity (for example, 1.2 litres and 0.6 litres). They need to be able to work out how much water was in a measuring jug (or picture of a measuring jug) even if the scale is partially numbered. They will be asked to convert between different units of measure (for example: know that 3.4 litres is 3400ml and 700ml is 0.7 litres).

In Year 5 children continue to convert measures. They will have to interpret a reading that lies between two unnumbered divisions on a scale, for example they would need to work out that this arrow is pointing at 800ml: 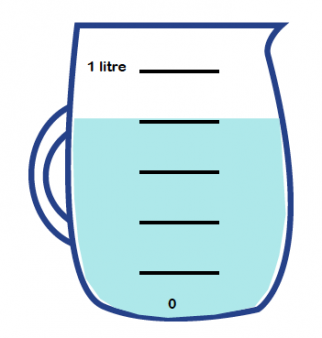 They will also use all four operations (+ - x ÷) to carry out capacity problem-solving, for example:

I have 2 litres of water. I need to divide it into 5 smaller jugs equally. How much water in ml will be in each of the five small jugs?

They will also begin to use approximate equivalences between litres and pints.

In Year 6 children are expected to know how to convert between units using decimals to three places, for example: they would need to change 3.69 litres to 3690 ml, or 9270ml to 9.27 litres, or 8.392 kilograms to 8392 grams.They continue to read scales to work out the capacity of certain amounts of liquid, but they start to have to make approximate measurements using their existing knowledge of capacity. They may have to compare readings on different scales, for example, being able to see which of these containers contains the most water: 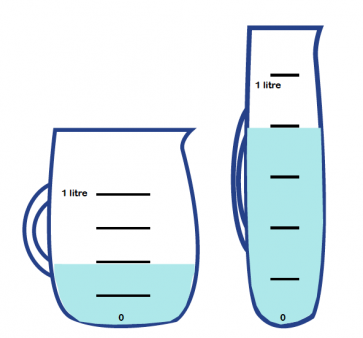