What is an explanation text?

What is an explanation text?

An explanation text is a non-fiction text which describes a process, for example: the water cycle, how bees make honey or how a car is made.

Explanation texts usually include these features:

Here is an example of an explanation text: 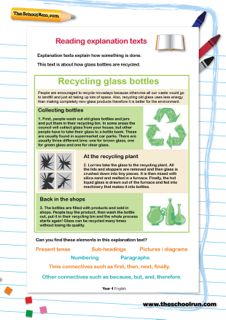 How are explanation texts covered in primary school?

They will discuss the above features and highlight them on the text. They may decide which text they prefer and be asked to give reasons for why they think it is better, for example: shorter sentences make it easier to understand, eye-catching pictures, better layout, etc. The point of these exercises it to get children familiar with the kind of language used in explanation texts and also show them how these texts are set out.

The next step may be for children to be given a process to focus on.

Often, a teacher will choose something that is in keeping with the topic being studied that term, or this writing may coincide with a design and technology project or a science experiment. For example: children may be asked to research how William Morris produced his prints, or how a musical instrument is made, or how pollination occurs. It is always helpful if children can have a real-life experience to support their learning, so a school trip to a museum or some kind of outdoor activity ensures that they are more engaged in this task and it is more meaningful to them.

Teachers often ask children to carry out verbal activities before they start writing, so they may ask the children to explain verbally what goes on in the particular process they are focusing on. This could take the form of a pair of children pretending to be television presenters, explaining the process to the whole class.

Children will then be asked to write their first draft of their explanation text, paying attention to the above features. There will then be a process of re-drafting where teachers will either mark the work themselves, adding comments to help improve it, or encourage the children to pair up and provide each other guidance on how to improve each other's work.

When children come to write up their work in neat, they will also need to concentrate on layout and making their text as eye-catching as possible. They may be given the opportunity to use a computer to print off pictures and words with interesting fonts, or they may produce the whole text using a computer.