Best apps for learning about fractions

Fractions can be tricky to master, but these great fractions apps will take the stress out of learning about this essential maths concept.
Login or Register to add to your saved resources 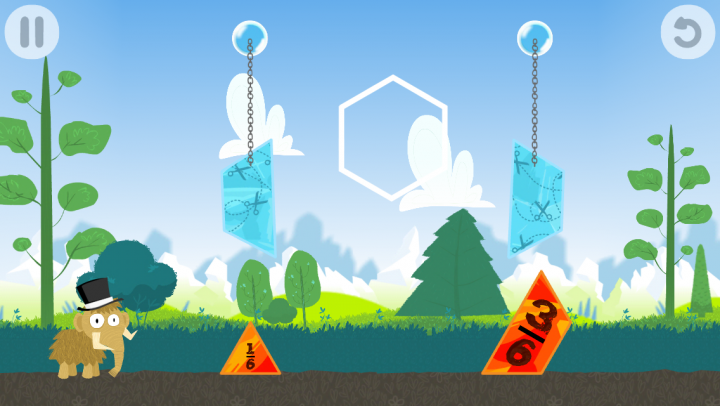 This award-winning problem-solving game will take your child through the first stages of learning about fractions. They have to clear a path through the game for their woolly mammoth by slicing through lava and ice, which they do by matching fractions with their equal.

In the first levels of the game, your child simply has to match up the shapes to make a whole – so, for instance, dropping two half-sized ice blocks onto a whole slab of lava. As they progress through the app, the challenges become more tricky, introducing numerator/denominator fractions, equivalent fractions (e.g. knowing that 2/6 is equal to 1/3) and adding and subtracting fractions.

There are over 140 puzzles for your child to solve, collecting a range of funky hats for their mammoth along the way. The app is intended for children aged five to 12, and once your child has got the hang of it, they can progress to the more advanced version, Slice Fractions 2. 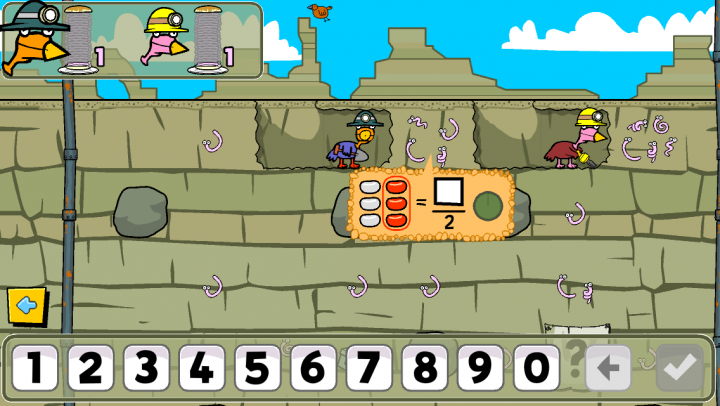 In this brilliant games-based app, your child has to help their hungry chicken dig up worms by solving fractions problems, including addition, subtraction, multiplication, division and finding equivalents. The harder the question, the more worms they’ll accumulate.

Your child can play against another person or against the computer, with the first to dig up 20 worms the winner. There are also bonuses and setbacks to discover along the way – and once your child has collected their worms, there’s an entertaining animation showing their chicken chowing down.

A particular benefit of this app is that it allows you to set the difficulty level based on your child’s age, so you know they’re tackling the right sort of problems for their year group and stage. 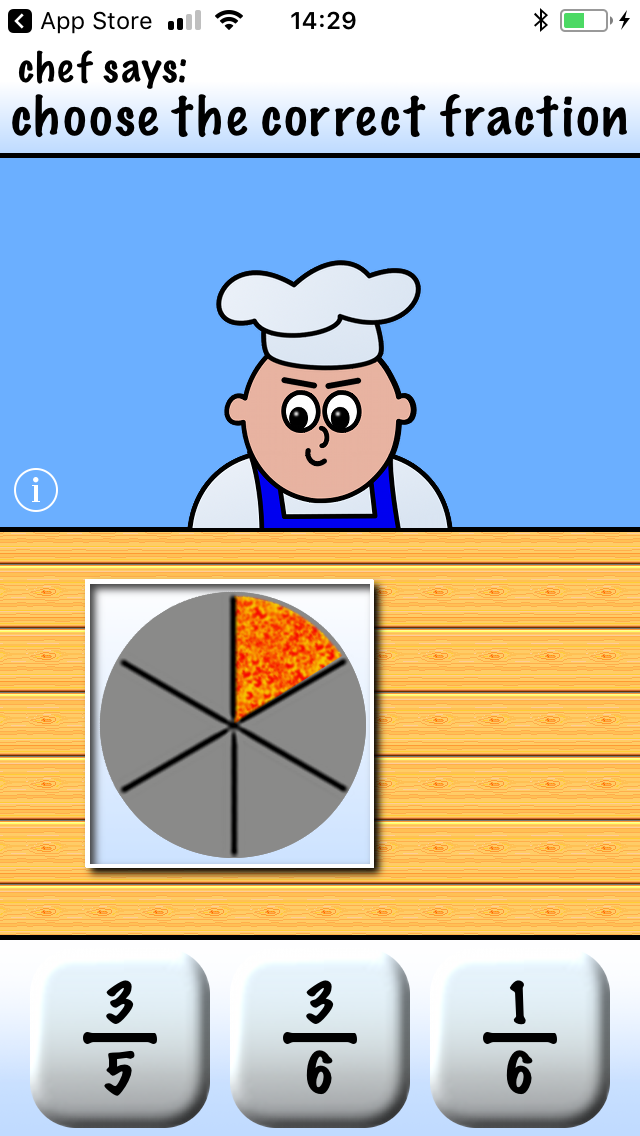 One of the first steps in learning about fractions is to develop an eye for what different fractions look like. Simple and free, Pizza Fractions is a visually-based app that will help your child become faster and more confident at naming fractions.

In the chef’s pizzeria, your child is presented with a series of pizzas, which lend themselves perfectly to illustrating fractions. They have to choose which fraction is shown from the three multiple choice possibilities below. There are three levels of difficulty, with the first focusing on basic fractions such as 1/2, 1/4  and 1/3, while the harder levels introduce trickier fractions like 1/9, 1/12 and 1/15.

Each round is timed and scored, so your child can see how they’re improving in accuracy and speed as they play. 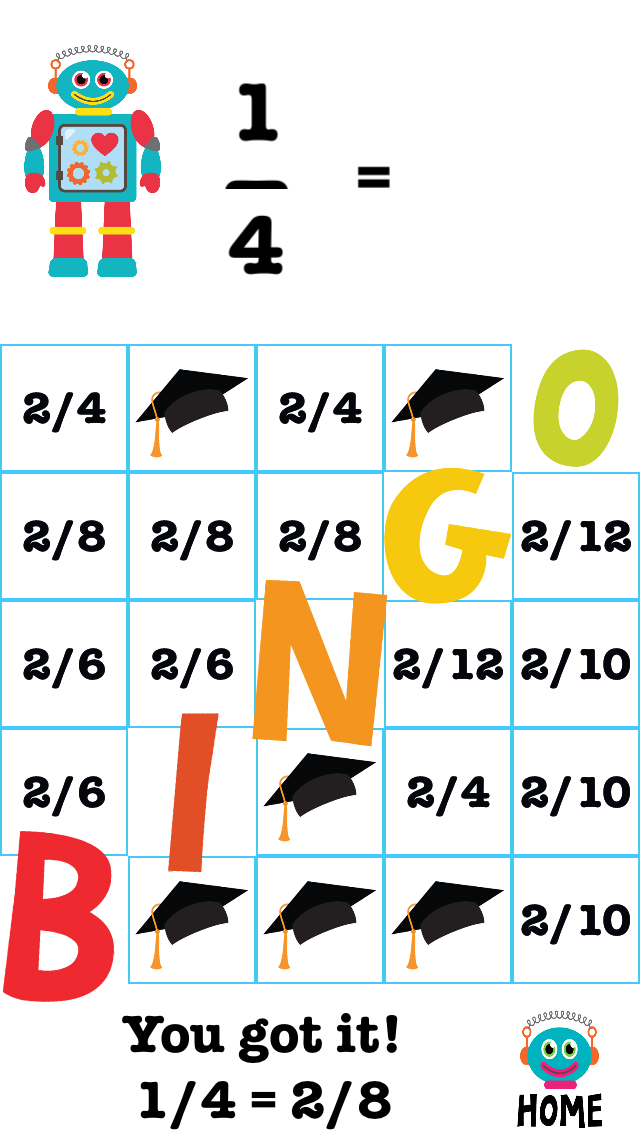 In Upper KS2, children are expected not just to recognise and be able to name fractions, but to manipulate them in maths problems. Booop Bop uses the popular game of Bingo to help kids get used to solving fractions challenges.

In each round, your child is given fractions problems to solve (for example, 2/10 + 1/10). They have to find the correct answer on the Bingo board and click on it; if they need help, they can click on the robot for a hint on how to tackle the problem. The aim is to get a complete line, and shout Bingo!

There are five different types of fractions game – addition, subtraction, multiplication, division and equality – enabling your child to start with the basics and progress to more challenging calculations, and they can collect new robots and unlock bonus games as they progress. 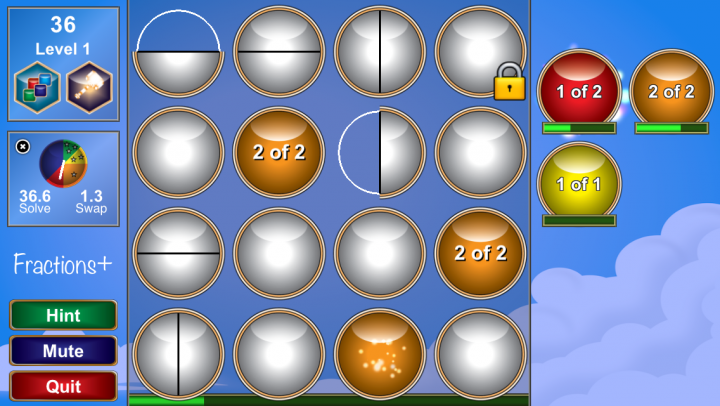 This app is great for helping children achieve automaticity with recognising fractions: a sign that they’ve properly understood what they’ve been learning. It helps them get used to identifying wholes, halves, thirds, quarters, fifths, sixths, eighths and tenths.

The aim of the game is to explode tiles on a grid by lining up three or more matching fractions. Your child has to keep the game going as long as they can, challenging themselves to beat their previous high scores. Be warned: it’s somewhat addictive!

You can opt for your child to work through the games in order, locking the harder levels until they’re progressed through the easier ones, or let them choose from the entire range of games. They’ll also earn stars as they play, with the goal being to achieve three stars: the mark of automaticity.

Best for practising addition with fractions 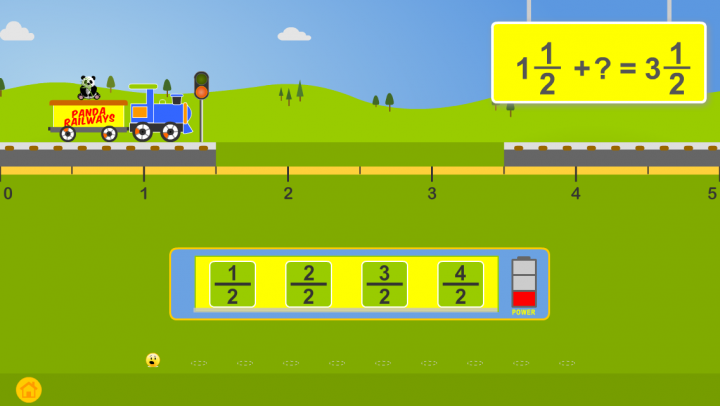 Subtitled The Panda Journey, this app is designed to test your child’s ability to add fractions: a skill they need to master ahead of Year 6 SATs.

The aim of the game is to help the panda get to the bamboo forest by repairing gaps in the railway. They do this by correctly solving a fractions problem (such as 1 + ? = 2 1/2), choosing the answer from a choice of four, which then provides them with the right length of rail to fix the track.

You can choose which fractions to work with from a selection of halves, thirds, quarters, fifths and eighths, and can also decide how many questions your child has to answer per game, depending on their skill level. But watch out: if they make three mistakes, it’s game over.

Best for mastering a range of skills 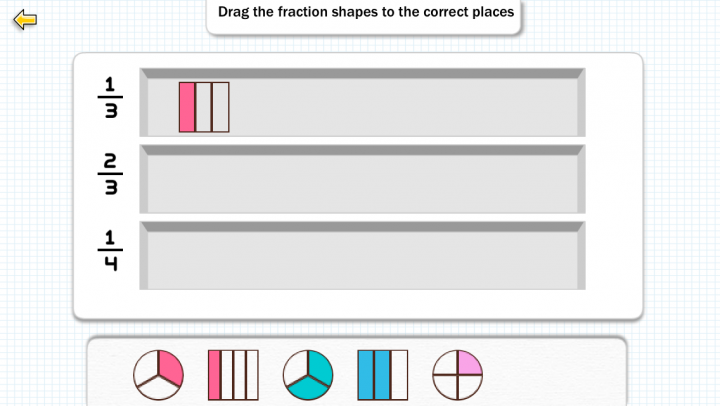 Tiny Fractions is a really comprehensive app that will teach your child a range of fractions skills, including estimating, comparing, ordering, finding equivalents, simplifying, adding and subtraction.

The app uses diagrams such as vials of liquid, circles and rectangles, familiarising your child with the different ways that fractions can be represented. Each sub-section has a range of tasks, including an overview, practice problems, and an opportunity to review what they’ve learnt, plus two games to test their newfound knowledge.

The inbuilt tests and quizzes allow you to track your child’s progress, and the app is fully adaptive, meaning that the difficulty increases as they become more adept at solving the problems. 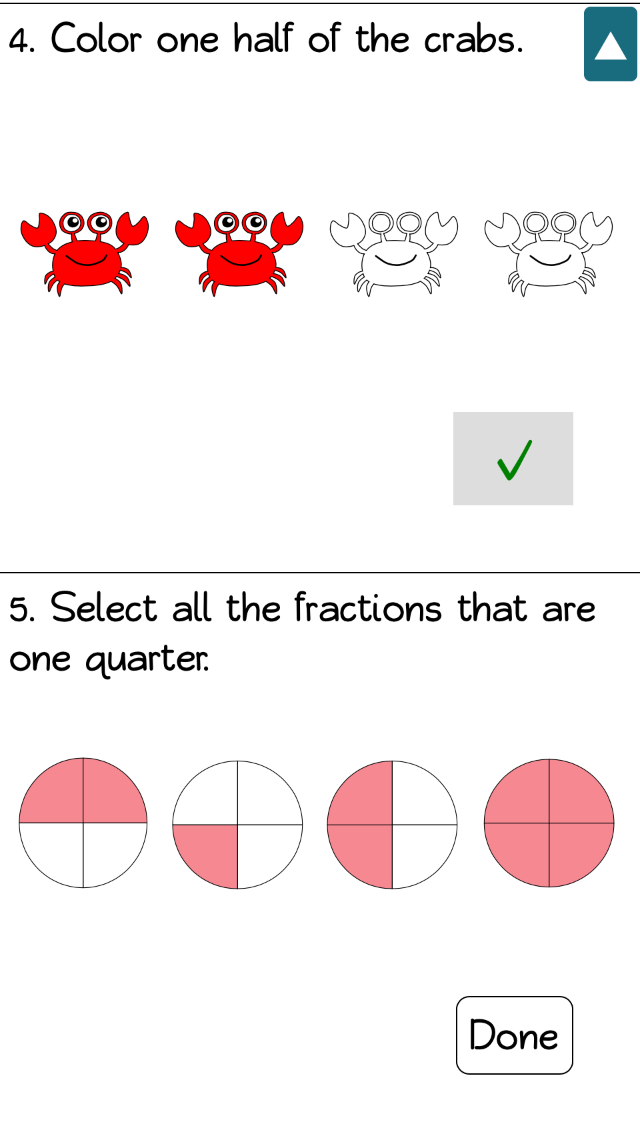 This app is ideal for KS1 kids who are just beginning to learn about fractions, focusing on halves and quarters.

It generates ‘worksheets’ of 10 questions, which includes dividing shapes into two and four equal amounts, selecting a quarter or half of a group of objects, and using the phrases ‘half of,’ ‘quarter of’ and ‘fourth of’. Children learn that the more portions you divide an object or group into, the smaller each portion becomes.

The clean, simple layout minimises distractions, and questions are randomly generated, meaning your child gets a new set of problems each time they play. This app is ideal for daily practice, with each worksheet taking no more than 10 minutes or so. 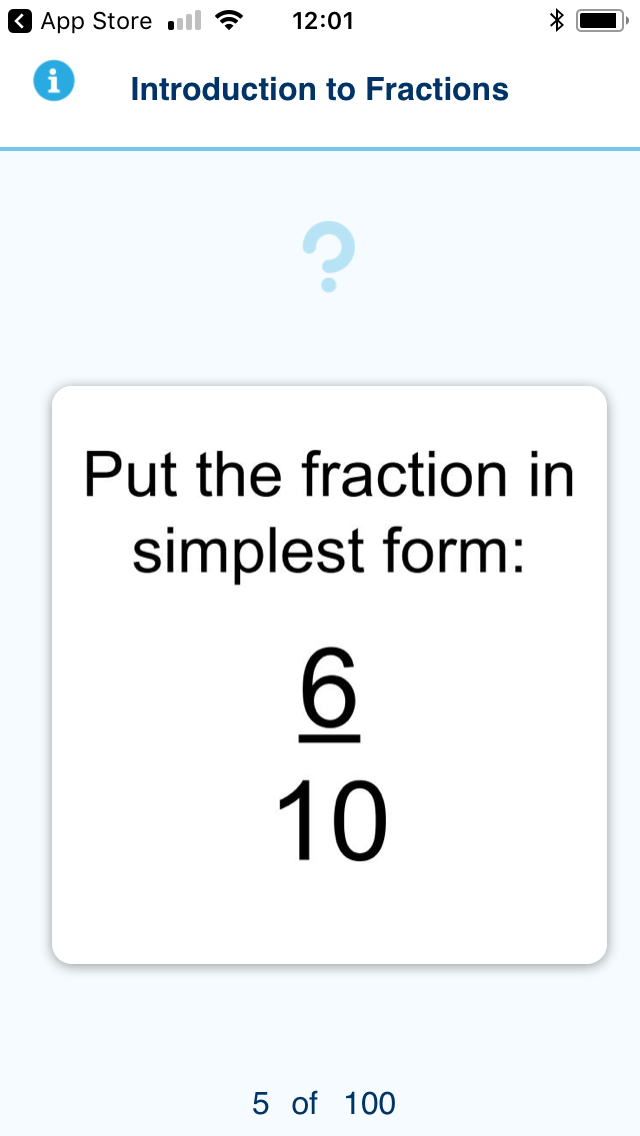 Mental maths is a vital skill for all primary children to master, and being able to solve fractions problems quickly without having to write down their workings will stand them in good stead for KS2 SATs.

The app features a series of problems on flashcards, focusing on proper fractions, improper fractions, mixed numbers, simplified fractions, and factors. Tapping on the card flips it over to reveal the answer, and swiping brings up the next problem to solve.

There are 100 questions in total, ranging from working out what fraction of a shape is shaded, to putting a fraction into its simplest form, giving your child’s understanding of fractions a thorough workout.

Best for understanding fractions and decimals 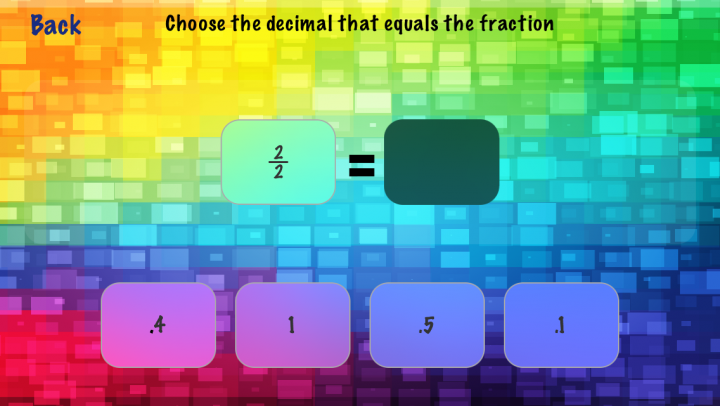 A key skill for KS2 children to master is how to convert fractions to decimals. This app gives them opportunities to practise, along with problems that’ll test their general understanding of fractions.

There are various types of game, including ordering, where they have to put a selection of decimals and fractions into ascending or descending order, and multiple choice, where they must select the decimal that equals a given fraction. 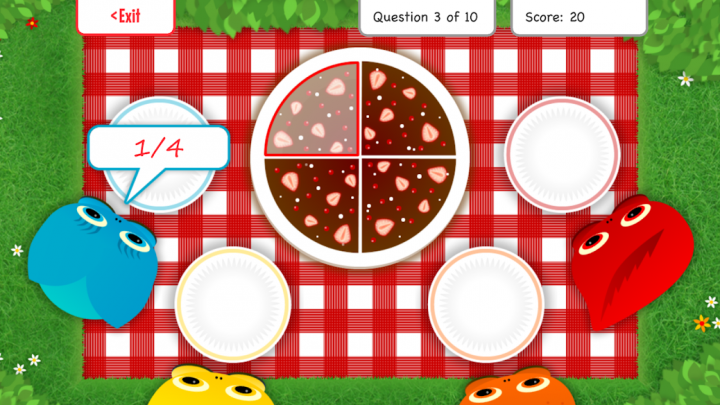 Kids often learn better – and are more enthusiastic – if they have incentives, and this app from the ever popular Squeebles family will have your child hooked on solving fractions problems and earning rewards.

Intended for children aged seven to 11, and covering fractions from halves to twelfths, the app has four different mini games for your child to get stuck into, including A Piece of Cake, where they have to drag different fractions of cakes to each Squeeble as they ask for them, and Super Sums, which involves answering 10 of the Maths Monster’s questions as quickly as possible.

By playing the games, your child earns cake ingredients (including curry sponge and sugared carrots) and gets to whip up their own culinary creation to enter into the Squeebles’ Cake Making Contest.