Help your child fall in love with poetry with these great apps for reading, listening to and creating poems.
Login or Register to add to your saved resources 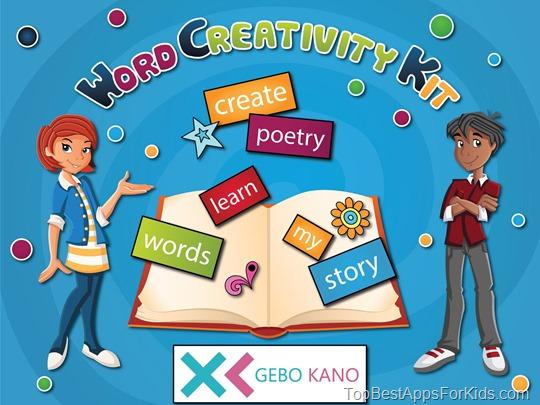 A finalist in the prestigious BETT education awards 2017, Word Creativity Kit is a brilliant all-round app that will help your child create poems and other creative writing.

It’s based on the concept of random stimulus, giving your child prompts to inspire their writing. They start with a selection of randomly generated words from seven different categories, then let their imagination run wild, creating poems, limericks, jokes, stories and even complete books.

There are also lots of interactive features to make poetry-writing fun, including stickers, backgrounds, colours and customisable fonts, and your child can ask Siri to read their poem so they can hear how it sounds when spoken aloud. 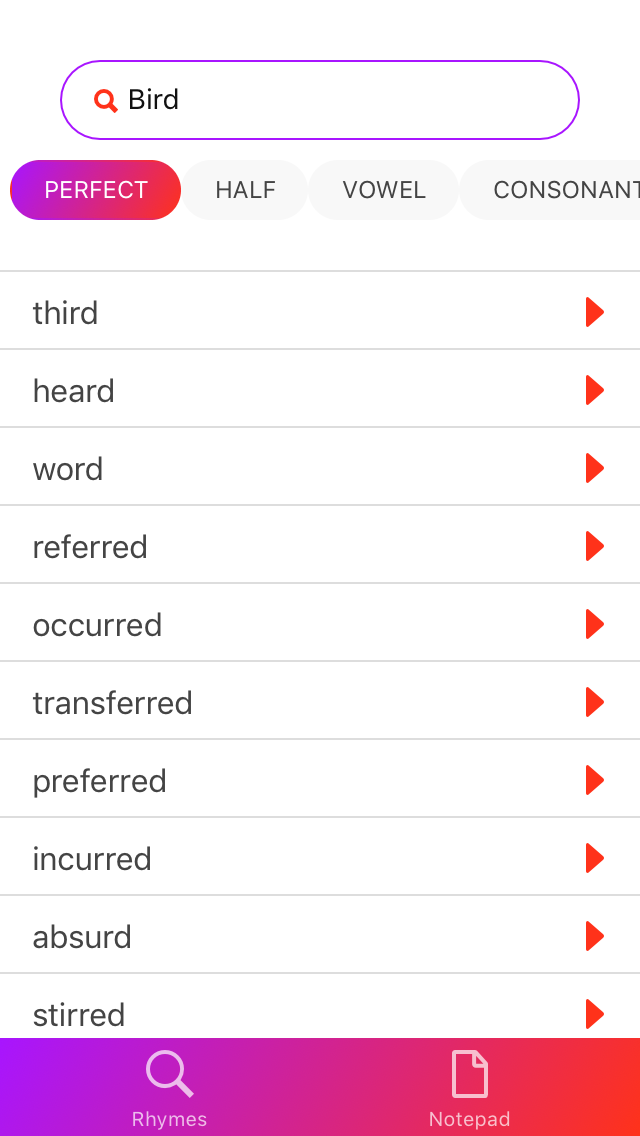 If your child is struggling to find the right rhyme for their poem, Furious Rhymes is the app they need.

The fast and powerful rhyming dictionary contains over 100,000 words for your child to use in their poems. They simply type in the word they want to rhyme with, and the app produces a list of suitable words including perfect rhymes, half rhymes, vowel rhymes, consonant rhymes and more (to access the full database, you’ll need a paid subscription at $3.99).

There’s a pronunciation playback feature so your child can check how the rhyme sounds, and they can look up the definition of a word, too. They can also use the inbuilt notepad to compose their poems. Just bear in mind that the app is in US English, so some spellings and definitions vary. 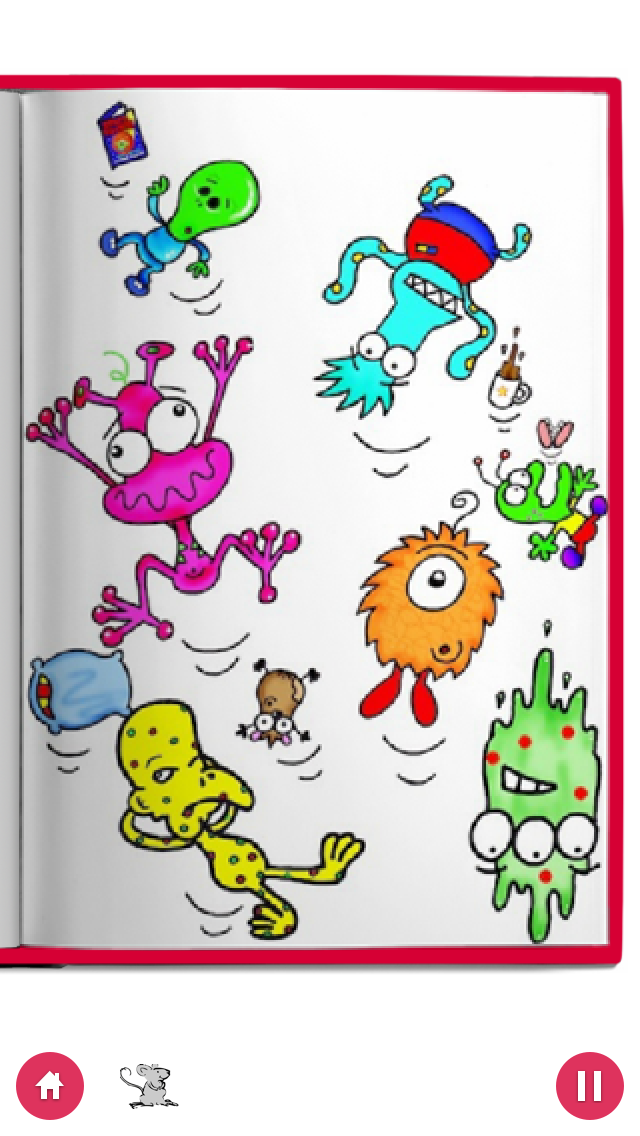 One of the real joys of poetry is to listen to it aloud. Space Rocks is a series of madcap rhyming stories set in outer space, with a cast of crazy characters.

Your child can choose to listen to each story read aloud to best appreciate the rhymes and humour (‘Take the school pet out of your nose!’), or read it to themselves. On a tablet, there is a book-style layout with the text on the left and colourful cartoon illustrations on the right; on a phone, your child can tilt the device horizontally to switch between words and pictures. The words are highlighted as they are narrated, allowing your child to follow the text.

As well as rhyme, the app introduces other poetic conventions such as onomatopoeia and sibilance, which your child can then use in their own writing.

The first storybook, Blast Off, can be downloaded free. Additional stories are £1.99 each.

Best for pre-schoolers and Foundation Stage 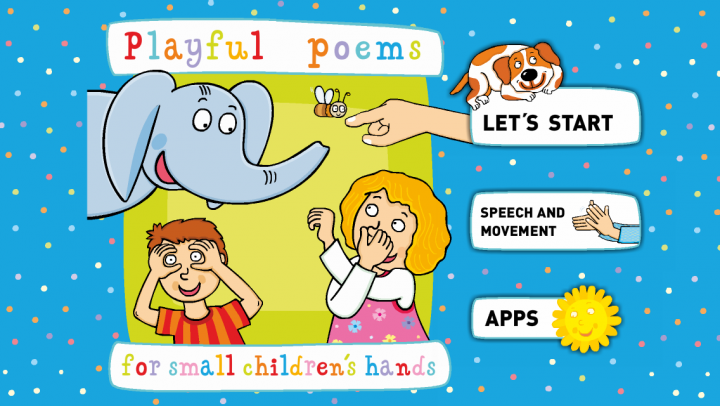 This interactive app is aimed at children of pre-school age, introducing simple poems that relate to their everyday lives.

The collection of 30 short original rhyming poems covers topics such as pets and siblings and day-to-day tasks like tidying up, with clear, British English narration and colourful illustrations. It also includes instructions for finger games and actions, building fine motor skills.

For parents, there’s an extensive information area which includes tips for sharing poetry with children and details about how their vocabulary and comprehension skills should develop according to their age and stage. 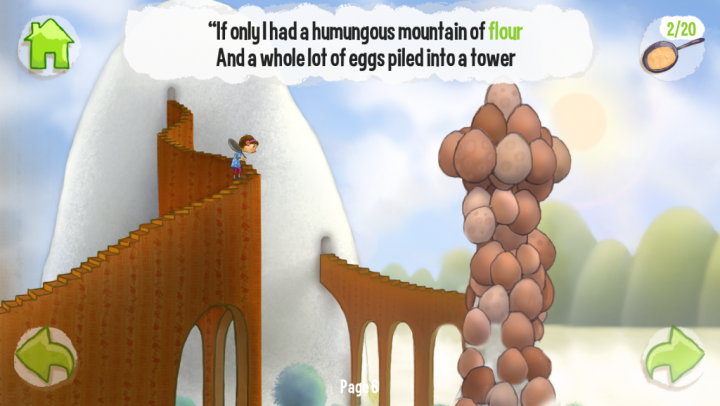 This beautifully illustrated story for young children will introduce them to the delights of rhyme as the protagonist, Polly, explores a virtual world to find the ingredients for her favourite pancakes.

The 24-page story rhymes throughout, with a choice of child or adult narrator. It’s also packed full of interactive features that will let your child discover every page in depth, ranging from tiptoeing up to a sleeping dragon to hoovering up the cat!

Your child can also hunt for the hidden frying pans throughout the app to unlock an interactive mini game. 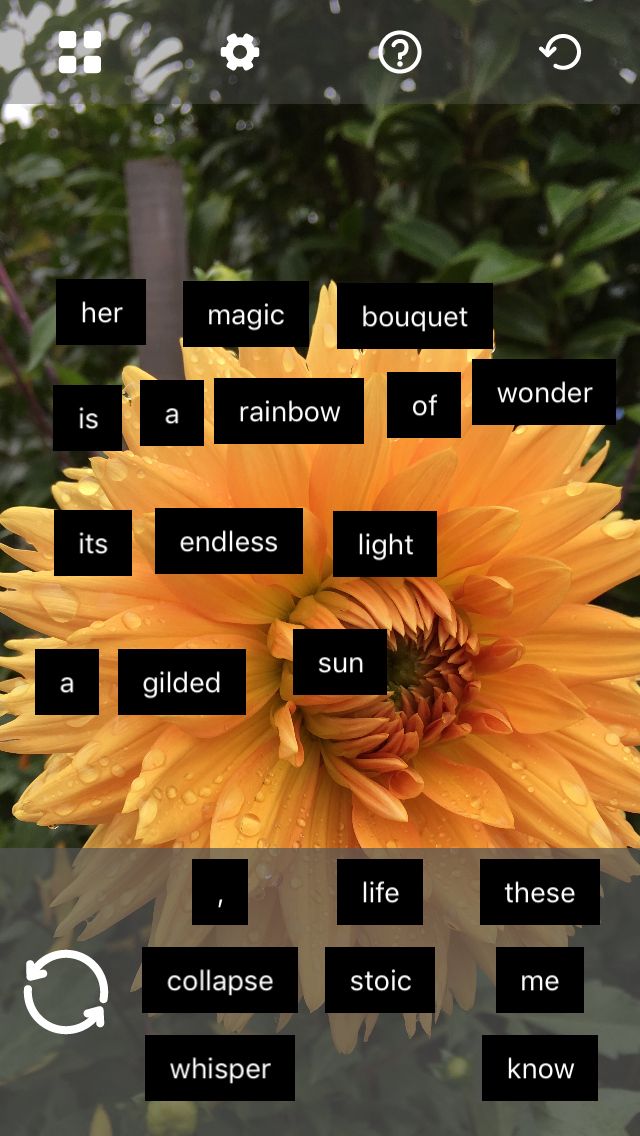 Remember those magnetic poetry sets that you used to use to compose masterpieces on the fridge door? Instant Poetry 2 is the digital equivalent, and although it’s not designed specifically for kids, they’ll have a lot of fun coming up with their own creations.

The app generates a random selection of words in a word bank at the bottom of the screen. Your child can choose the ones they want to use and drag them to the top of the screen to compose their poem. If they don’t like the words they’ve been given, they can refresh them as many times as they like. They can upload their own photo to use as a background for the app, or opt for a randomly generated picture.

The basic version of the app is free, but upgrading to Super Poet allows you to customise font and colour, add your own words, and more. You can also unlock different word themes, including pirates and LOLcats, for 99p each. 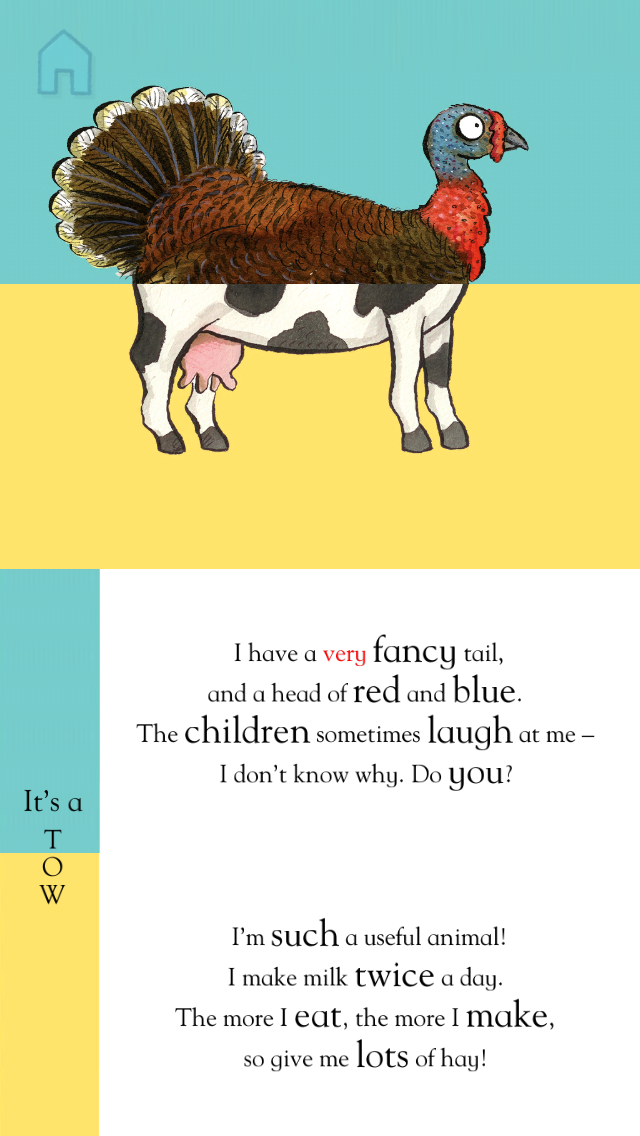 Illustrator Axel Scheffler is one of the best-known names in children’s literature, and the Flip Flap series of apps from Nosy Crow brings his iconic illustrations to life with rhyme, music and sound effects.

The books feature split pages that your child can swipe to switch different halves of animal bodies in and out, making up their own crazy creatures, such as a ‘durkey’ – a dog crossed with a turkey. Each combination has its own rhyming poem for your child to listen to, with the text highlighted for them to follow, or to read aloud themselves. 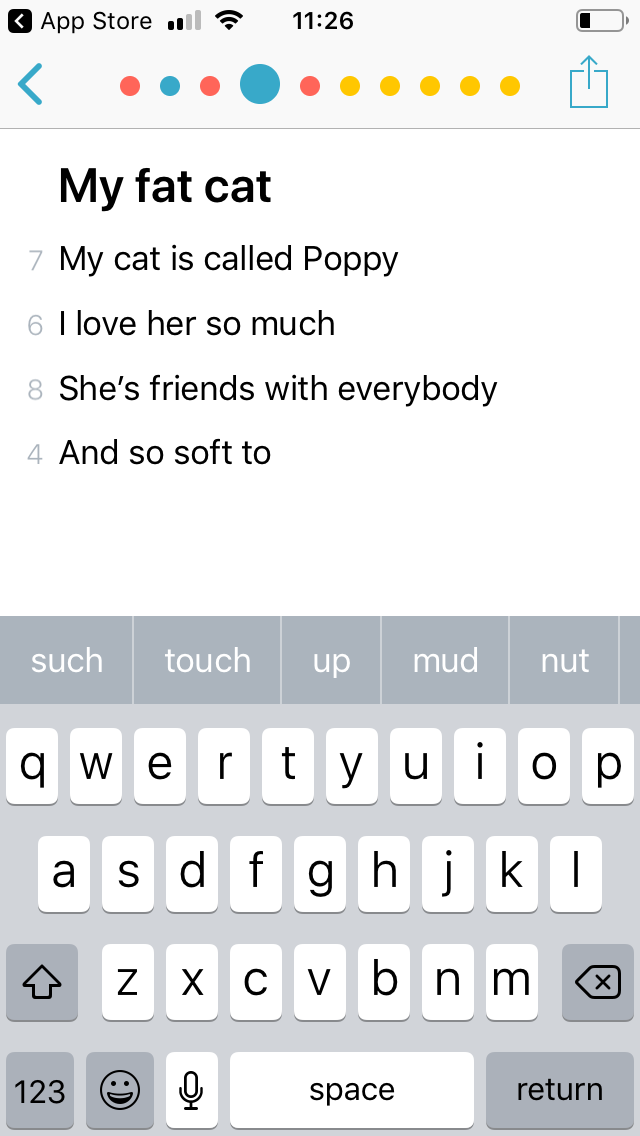 Poetreat may not be intended for children in particular, but it’s a great app for helping them write their own poems, tracking the syllable count of each line and suggesting words that rhyme.

First, your child can choose the rhyme scheme for their poem (for example, ABAB, AABB or ABABCC). They then compose their first line. As they start each new line, the app suggests words that rhyme with the words they used – such as stay, way, sway and bay to rhyme with ‘play.’ Your child can tap the word they want to use, and it will insert it in their poem.

The app also tracks how many syllables your child has used in each line, to make sure it scans properly.

The free app allows your child to create three of their own poems. To write unlimited poems, you can buy the full version for 99p. 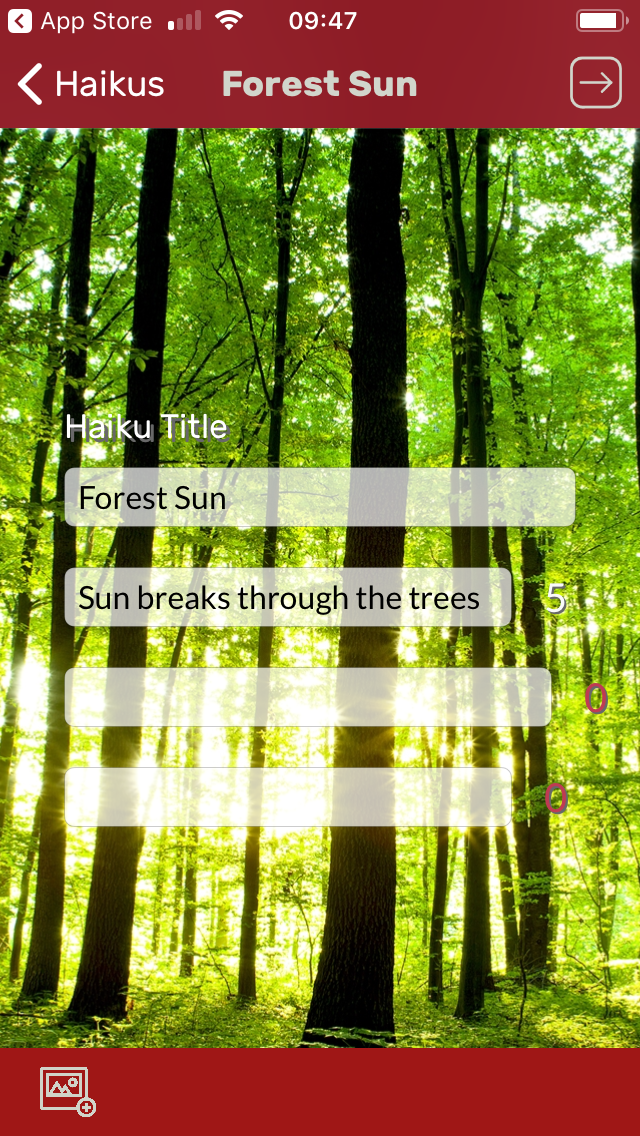 Primary school children are often taught to write haiku – short Japanese poems that have three lines of five, seven and five syllables – as part of the English curriculum. This simple little app is great for helping them practise writing haiku at home.

Your child starts by selecting an image to use as inspiration, choosing from the stock images or uploading a picture of their own. They can then write their own haiku on top of the image, with the app tracking how many syllables they’ve used on each line.

Finally, they can save their haiku, and the app will convert it to an image with text overlay that they can share or print: perfect for sticking in their homework book.

Best for playing with friends 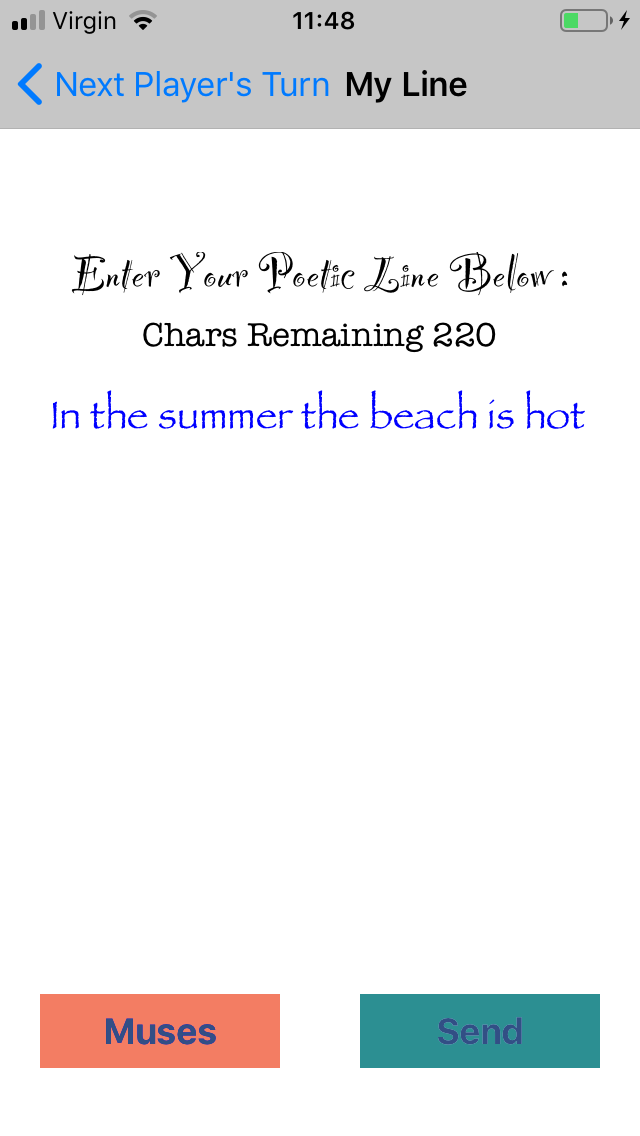 Writing poetry can be more fun when you have someone else to bounce ideas around with. Build A Poem is a turn-taking game that lets your child compose poems with help from their friends.

The game starts with your child composing the first line of their poem using the inbuilt keyboard. If they’re struggling for ideas, they can tap the Muse button to be inspired by lines from famous poets such as Shakespeare and Emily Dickinson. Once your child has written their sentence, they pass the device on to the next player so they can add the next line.

By writing poems, your child progresses from Junior Poet to Street Poet, Royal Poet and beyond. They can also share their creations on social media, with your permission.

'Flash' The Local Express Remote Controlled Battery Train Set is fun for all ages! Enter for a chance to win a set worth £64.99