Is your child a budding poet? We asked prolific author and former Children's Laureate Michael Rosen for his tips for giving kids the poetry-writing bug.
Login or Register to add to your saved resources

Michael Rosen is one of Britain’s best-loved children’s writers, and the author of classics including We’re Going on a Bear Hunt, Don’t Put Mustard in the Custard, and No Breathing in Class.

We asked the former Children’s Laureate for his top poetry-writing tips for kids, and here’s what he had to say.

‘It’s really good to read or listen to poems by other people, and then daydream about how you could make them yours.

‘Could you make your own poem sound like the one you’ve just read, or write a poem with the same theme, or even copy a line of it to inspire your own writing?

‘There are thousands and thousands of poems online that could inspire you to write your own poetry.

‘On YouTube, there are lots of videos of poets performing their own poems and other people’s. You can put in your favourite poet’s name, or type in a description like “funny poems” or “sad poems.”

‘Have a look at my YouTube channel, Kids’ Poems and Stories with Michael Rosen: I’ve made over 200 videos that you can watch.’

‘Think of yourself as being like a crow, going about looking for things you can take for yourself.'

‘Repetition is a brilliant way to pull a poem together.

‘Rhyming is a form of repetition, but you don’t have to write poems that rhyme.

‘You could make the last line of the poem the same as the first line, or have a little phrase that you repeat, or even repeat a chunk of three or four lines.

‘When you use repetition, it gives your poem a shape and meaning.’

5. Compare things to other things

‘Poets always describe things by saying they’re like something else. For example, one of Shakespeare’s most famous poems describes someone as being ‘fairer than a summer’s day.

‘You can compare things by using phrases such as “like,” “as lovely as,” “more than” and “less than.” These are called similes and metaphors.

‘Look very closely at things until you find something that it’s similar to: you might cut an apple in half and think it looks like a cross-section of the world.

‘Remember, comparisons don’t always have to be beautiful and nice: you might think that a crow looks like a wounded soldier.’

‘Poetry can be a way of telling jokes. For example, limericks are usually very funny.

‘One way to make people laugh is to steal the shape of your poem from something unexpected.

‘You could use the format of the instructions for assembling a piece of furniture to write a poem about how to have a bath, for example.

‘Or you could use the structure of your school rules, or the Once upon a time shape of fairy tales, or even the Highway Code.

‘When you surprise people by mucking around with things that are quite formal, they’ll find your poem funny.’

7. Think about how it sounds

‘Another good way to write poetry is to make it sound like the thing you’re describing.

‘Robert Louis Stevenson’s poem, From a Railway Carriage, has a rhythm that sounds like the wheels of a train going clickety-clack, clickety-clack.

‘If you were writing about the school dinner hall, you could use short sentences that interrupt each other to make it sound noisy and busy.

‘If you were writing about a river, you could make your sentences long and flowing.

8. Let your pen do the talking

‘I got into writing poetry for pleasure when I was about 15, when I discovered that I could talk with my pen.

‘Talking with your pen means thinking about something you want to say, and using it as the starting point for your poem.

‘It could be a feeling, like “I’m lost” or “I’m fed up,” or it could be a memory: one of my first memories was of sitting on the beach when I was three years old, and I turned it into a poem.

‘The moment you start talking with your pen, you have something to write about.’

9. Make time to write outside school

‘But when you’re writing poetry at home, you never have to worry about being right or wrong. You can write about things that interest you, or you can do things that you might not be allowed to do at school, like ending your poem with a question.

‘You’re even allowed to daydream: a lot of great poems start out that way.’

Michael Rosen is the author of over 50 books for children and adults, including What is Poetry: The Essential Guide to Reading and Writing Poems (Walker Books, £6.99). 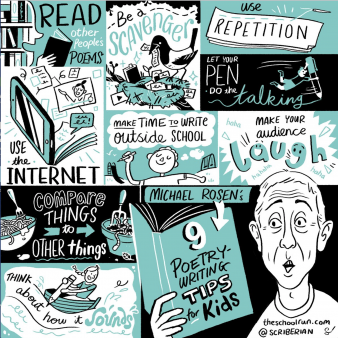 With thanks to Scriberia for the illustration