Help your child build their confidence, speed and accuracy with subtraction with these games-based maths apps that'll make learning fun.
Login or Register to add to your saved resources 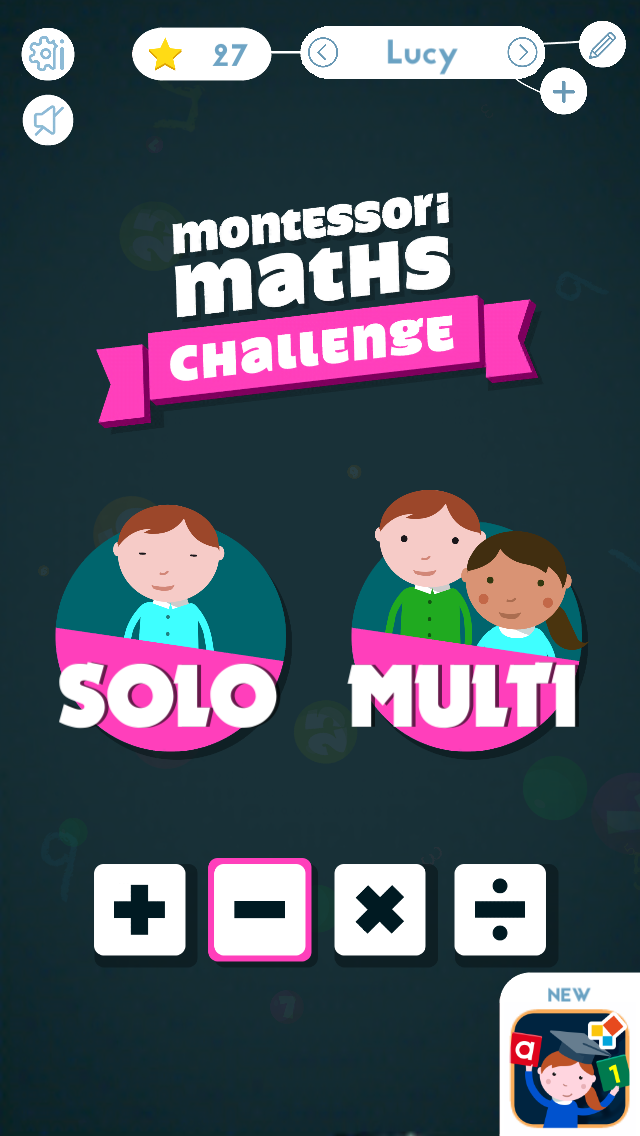 This app features problems involving all four operations (addition, subtraction, multiplication and division) but you can opt for your child to practise subtraction only – or any other combination of the four – so they focus on the subject areas they find trickiest.

There are four different question types – multiple choice, missing digits, open answer and Bubble Game – which are closely aligned to some of the question formats your child can expect in their Year 6 SATs. You can choose which types you would like your child to be challenged with in each round of 10 questions.

One of the best features of Montessori Math Challenge is that it encourages children to use the units, tens, hundreds and thousands method they’re taught in schools. There’s also a handy ‘scribble pad’ where they can write down their workings for any questions they can’t answer mentally.

The app learns from your child’s correct and incorrect answers, and will tailor future questions to their current ability. They earn stars for answering correctly and quickly, and can challenge their own score over time. There’s also a multiplayer game for up to four children, which involves them passing the device between them and competing with each other’s scores. 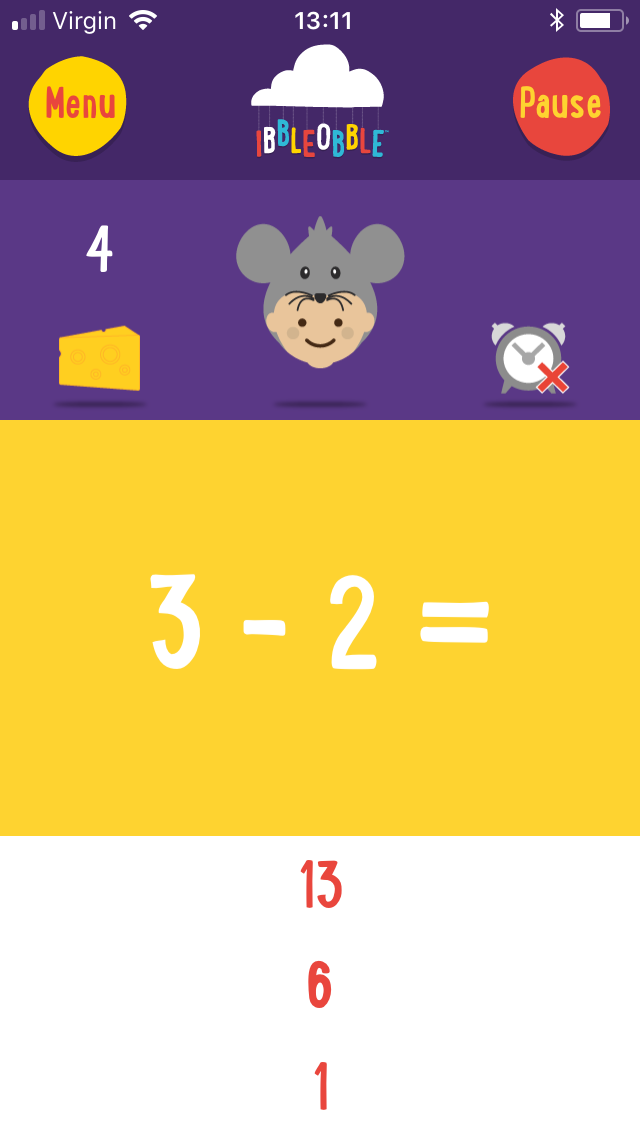 Subtraction with Ibbleobble is ideal for KS1 children. They choose which animal ‘friend’ to play with from a selection of seven, with each character representing a different difficulty level. They can then select which degree of difficulty they’d like within that bracket: easy, medium and hard.

Your child is presented with a sequence of subtraction questions, with three possible answers to select from. Each correct answer is rewarded by a positive affirmation, such as ‘I like it!’ or ‘Amazing!’ plus a reward for their character (for example, cheeses for Mr Mousey).

The lower levels feature simple single-digit subtractions, and your child has unlimited chances to answer. In the higher levels, problems are more complicated and they play against the clock, helping them build speed and fluency in their mental subtraction skills. Their top scores are recorded so they can try to better their previous results over time. 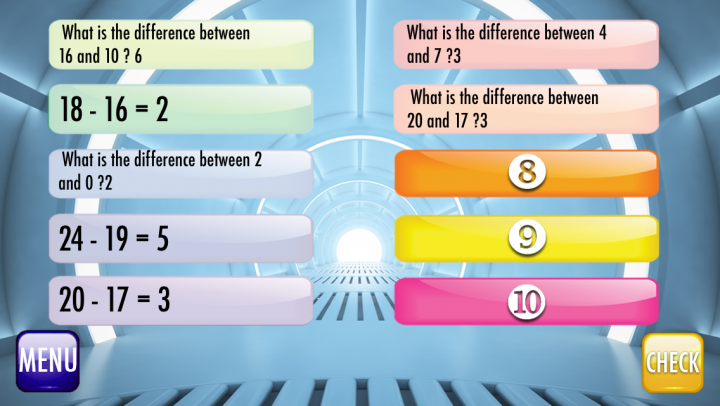 To perform well in KS2 SATs, your child needs a solid knowledge of subtraction in all its different forms. Subtraction Galaxy, developed by primary school teacher and YouTube star Mr Thorne, will help them give their subtraction skills a thorough workout.

The app features a range of different subtraction-based challenges, beginning with simple -1, -10 and -2, 3 and 4 questions. The higher levels cover topics including finding the difference between two numbers, putting numbers into a sequence, halving and word problems. As your child plays, they earn space objects for their gallery of discoveries.

Each category has four different levels of increasing difficulty: Beginner, First Class, World Class, and Time Attack, where your child plays against the clock. If they get stuck, pressing the Hint button brings up a number line to help them calculate the right answer. 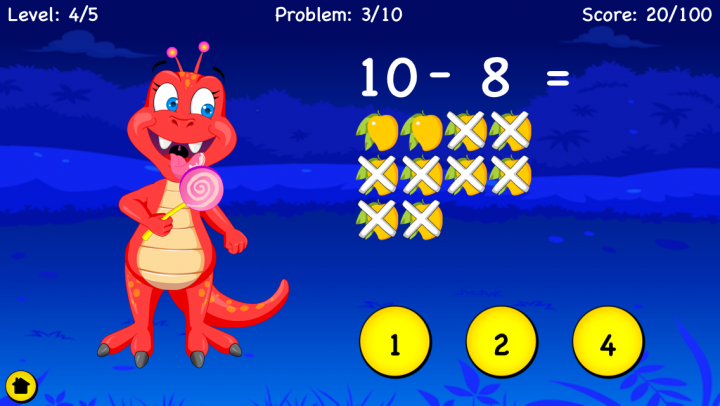 This app is really helpful for teaching children to subtract using two methods that are taught in primary schools.

The Basic mode introduces the concrete-pictorial-abstract approach that is used in KS1 as part of the Asian Maths Mastery method. It shows your child how to solve subtraction problems in three steps: counting out the right number of objects (apples or oranges), crossing out the number they have to subtract, and then counting the remaining objects to find the answer.

Once they’ve practised, there are five levels of 10 questions for them to work through. Again, the objects are shown so they can count them. The problems involve single- and two-digit numbers with multiple choice answers, and your child has to complete each level to progress to the next.

The Advanced mode teaches your child to solve more complex problems using the column method of subtraction. They are shown how to work with units, tends, hundreds and thousands, carrying over where necessary. There are five practice levels using up to four-digit numbers; they can skip ahead if they feel confident, then challenge themselves by taking a test. 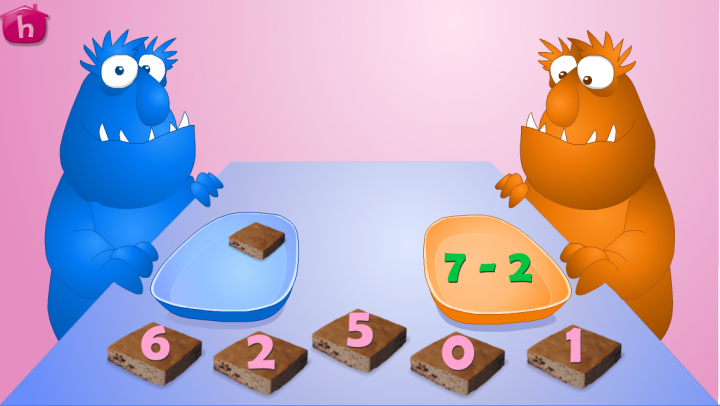 Renowned reading programme Reading Eggs has branched out into maths apps, and hit the nail on the head with Eggy Subtract to 20. It’s designed to help children become secure in all their subtraction number facts to 20: the basic calculations that they should all be able to solve instantly.

The app features six mini games, each challenging your child’s subtraction skills in a slightly different way. Snowboarder, for example, is a downhill racing game where they have to collect flags bearing subtraction problems that match the number at the top of the screen, while Monsters involves dragging the cake with the correct answer onto a monster’s plate for them to gobble up. Each game has several different levels, and your child can collect cute critters called Mashies as a reward.

The real appeal of this app is its generous helping of humour. Pie-throwing grannies, monsters with revolting table manners and a robot who pinches the mad scientist’s bottom will get your child giggling, and they’ll hardly notice they’re practising their subtraction skills. 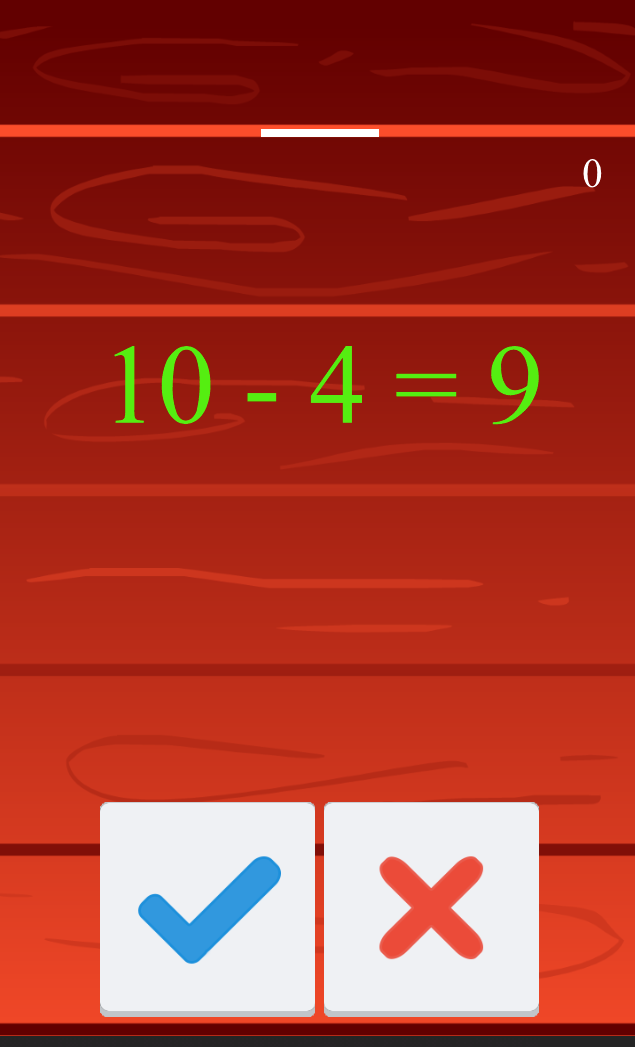 Being able to solve simple equations quickly will put your child at an advantage when they’re taking KS2 SATs or the 11+. Fast Subtract Math Kids is an app that will help them build speed through repeated practice.

It challenges your child with a quick-fire series of single-digit subtraction problems; they have to press a tick or a cross depending on whether or not the given answer is correct. This may sound simple, but they have to react within a matter of seconds: if they take too long or get the wrong answer, it’s game over.

The app is pretty basic and does feature some advertising (a consequence of it being free). But if your child loves to challenge themselves, trying to beat their own record of correct answers will spur them on to become faster and more accurate in their subtraction skills. 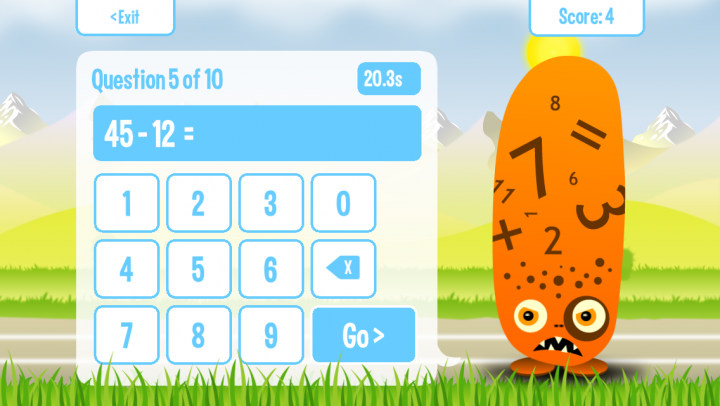 The Squeebles are a friendly bunch of monsters, and the stars of a suite of maths apps. Squeebles Add & Subtract lets your child focus on one operation at a time, or challenge themselves with a mixture of addition and subtraction questions.

In Subtract mode, your child can choose from four levels of difficulty, from single-digit problems to tricky questions involving tens and hundreds. They’re also pitted against the clock as a challenge of their mental maths skills.

Each round of questions gives your child 10 calculations to tackle. As an incentive, they earn a turn on the racing game Squeeble-Cart for every correct answer. They also have the chance to unlock new Squeebles to race their cart, and earn stars that they can cash in for faster, flashier carts.

The app automatically adds questions that your child gets wrong to the ‘Tricky Questions’ area, which gives them extra practice in the problems they struggle with. 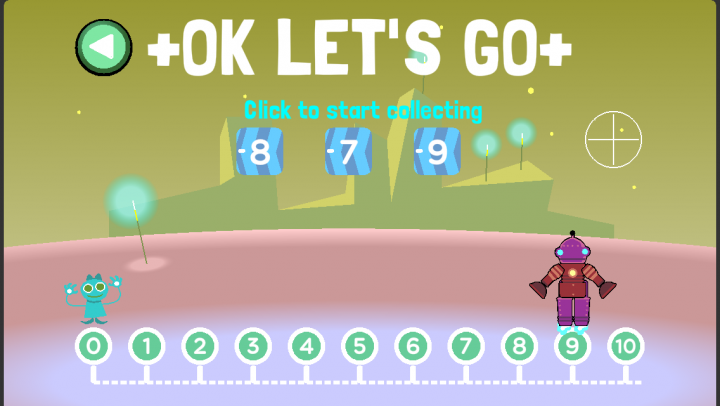 Number lines are an important learning tool in KS1, enabling children to get to grips with addition and subtraction by counting on and counting back. Number Line Galaxy will help your child become familiar with using them, with an appealing space theme. You can choose to focus on subtraction (or addition, number bonds or times tables), or challenge your child with a mix of problems.

Questions are grouped into subtraction 1-5, subtraction 1-10, and subtraction 1-20 categories, with each group being unlocked when your child completes the preceding levels. They’re rewarded for their efforts by collecting new body parts to customise their robot, and new aliens to party in their space station. 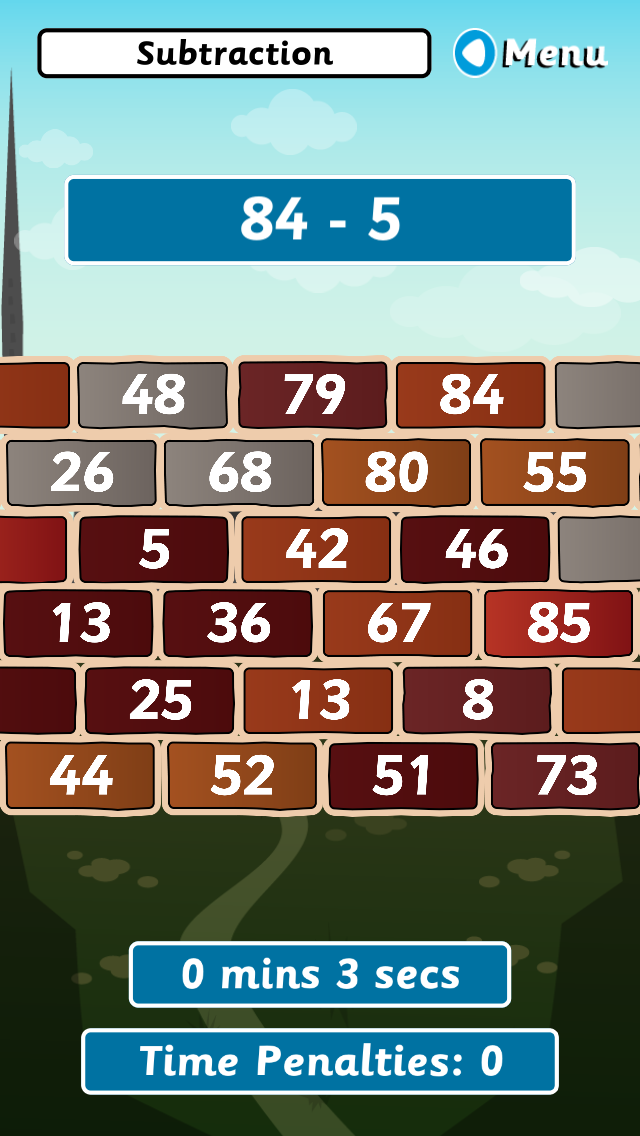 Wipeout Wall is designed to help children improve their subtraction skills in line with the National Curriculum. Your child has to break down a wall as quickly as possible by tapping the brick that displays the correct answer to each question.

There are four different types of wall of increasing difficulty, which correspond to subtraction using units only; tens and units; and hundreds, tens and units. The app records your child’s best time, with time penalties for wrong answers, so they can see how they’re improving.

Wipeout Wall also has an addition section, where your child can practise adding numbers from 0 all the way up to 1000. 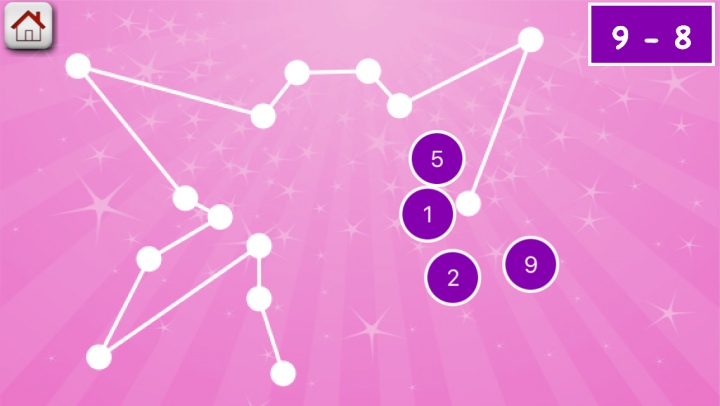 This simple but engaging app involves answering questions correctly to join the dots, creating a fairy picture that your child can colour with their finger.

You can choose which operation to focus on. In Subtraction mode, there are three levels with difficulty: the easiest involves subtracting single-digit numbers, while the hardest features two-digit numbers and problems that require borrowing.

If your child isn’t into fairies, there’s an alternative version of the app featuring dinosaurs instead.