A Maths Week costume?!? Don’t get your numbers in a twist! Non-crafty mum Phoebe Doyle’s on hand with some no-sew, no-stress ideas.
Login or Register to add to your saved resources

These days it can seem like everyone’s a sewer. Or a knitter. Or a felt-maker. Whatever – it just feels like everyone is crafty, handy with a needle, can turn an old pillow-case into a summer dress at the click of their fingers.

Well, for us mere mortals who roll our eyes when our child gets given a ‘sew a puppet’ -esque present for their birthday, here’s how to get Maths Week costumes all sewn up, without any sewing at all!

For this you’ll need a cube or cuboid cardboard box. Cut away the bottom of the box, and cut in a hole for the head and two for the arms. Paint the box white all over (or, ideally, get your child to do this bit!). Once dried, stick on dots to complete the die. They can then wear the die over plain clothing. Enlist a similarly-clad friend to make two dice!

Get your child using their maths knowledge whilst they help you make! Buy a cheap white T-shirt and some fabric pens and let them scrawl their own calculations all over it! Alternatively they could carefully scribe a story problem on the front, and the calculation on the back.

Make a ‘sandwich board’ for your child to wear by getting two large pieces of card (the thicker, the better) and fastening them together with ribbon or elastic by piercing holes at the top and threading through. Paint the card white all over and then cut out red or black paper to make a number playing card.

Yes, this is a bit of a cheat, but a pretty clever play on words too (and who doesn't love The Count on Sesame Street?)! Re-use a Halloween costume and have them go as Count Dracula! To ensure that everyone gets the joke, stick numbers on the cape.

Ideally buy a tabard for this one (you’ll probably be able to get cheap adult-sized ones from a market, so just opt for the smallest size available). Fasten a large piece of thick card onto the front of the tabard. Cut out smaller bits of card for the calculator buttons, colour them in and mark on the numbers and signs appropriately. Stick them onto the thick piece of card in the correct place.

If you’re a dab hand with face paint you could paint on an analogue clock onto their face. They might like to go specifically as Big Ben (or a local clock if there’s a famous clock tower in your town or city), in which case have them dressed in beige or grey for the stone.

There are a few options if you decide on a money theme. You could go for a ‘sandwich board’ design and make both sides look like money notes. Alternatively you could have them dressed in all black and stick Monopoly money, or print-outs of different-sized coin images, all over.

Mathematical costume: A Piece of Cake

If your child has been looking at fractions in their maths work, chances are they’ll have discussed dividing cakes evenly. For this one you can just cut out large ‘slices’ that would be different fractions. Have your child decorate each slice using paint, tissue paper, etc. to look like a slice of cake. Then write on a fraction that would look correct for that sized slice. Then stick the slice (or slices if you decide to do a few) onto some plain clothing for them to wear.

Similar to the cake idea, but this time show the entire circle. So start by asking your child to decorate a large card circle to look like a pizza, using paint, tissue paper and glue. Then have them draw on, using a back felt-tip, how they want to divide the pizza up (for example into quarters or eighths). They can then write on the correct fractions. Stick this pizza to some plain clothing for them to wear.

Similar to the dice idea, get a cube or cuboid cardboard box. Cut out the bottom of the box, and cut in a hole for the head and two holes at the sides for the arms. With your child, paint the different sides of the box in different Rubik Cube colours. Once dried, using a black felt-tip, carefully draw on the lines to make the squares. They can wear the box over plain clothing.

Thank you to Abigail and Sam, brilliant scientific cow-culators, for posing for our main image! 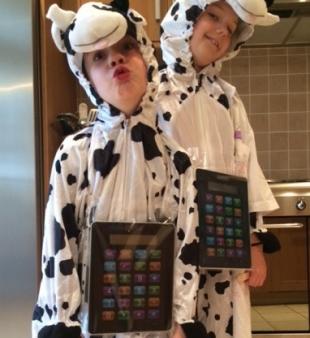