Children often learn faster if they are allowed to use practical equipment to support them. Primary teacher Angela Smith explains what maths aids your child might find in the classroom, and how you can also use them at home to help your child practise important numeracy skills with hands-on, practical activities.
Login or Register to add to your saved resources

Smarties (or Lego bricks, pasta shapes, pennies, buttons or paperclips) or any other small items are a brilliant way to help your child practise counting.

At home, younger children (KS1) could sort counters into sets of colour, shape or size or count out a particular number using the countes to help. They could practise addition by combining two different amounts and begin to realise that subtraction will ‘undo’ this. Younger children benefit from moving items as they count them as this avoids counting the same item twice.

Older children could practise division (which many children find difficult) by ‘sharing’ the sweets or pasta into equal groups or by seeing how many different sets can be made from the amount (for example, 12 could be made as three groups of four, four groups of three, two groups of six and so on).

Number lines are used in the classroom to help children develop their sense of number order, and to calculate using the four number operations (addition, subtraction, multiplication and division).

Younger children may count on or back using a number line to 10, 20, 50 or 100. They may use a smaller version to help them when counting, or to add or subtract.

In upper KS1 and KS2 children use ‘empty’ number lines to support more difficult addition and subtractions, as well as division and finding multiples of numbers. They will also use number lines which may not go up in ones, or might include negative numbers.

A fun alternative to a number line for younger children would be to use string and pegs to make a number washing line. Write numbers on pieces of paper and ask your child to order them.

You can download a selection of free number lines to print out from TheSchoolRun.

A number square (sometimes called a hundred square) can be used to support counting, to help recognise number patterns and to help when calculating.

In KS1 children find them helpful when recognising odd and even numbers, when learning to count beyond twenty, or when practising counting in 2s, 5s or 10s. As a simple exercise to help your child with their place value skills, cover numbers at random and ask your child to tell you what they are. Download a free number square to try it with your child.

Older children can use a number square to learn times tables or find number patterns by colouring in, for example, every fourth square and noticing what happens. They are also useful when learning to add or subtract 9 or 11 by recognising the ‘shape’ that this makes on the square. A good introduction to 100 squares is the game of snakes and ladders!

Blank number squares (also known as blank hundred charts or hundred squares; download an example) are also used in school and are particularly good for demonstrating the equivalence between fractions, decimals and percentages. 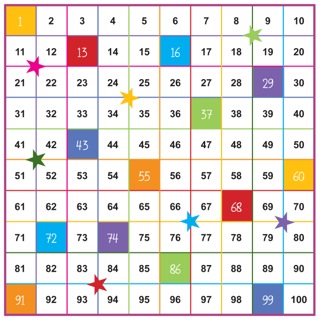 Fractions equivalency walls are used mainly by KS2 children to show the fractions which are equivalent to one.

They are useful when comparing and ordering fractions, and talking about which fractions are larger or smaller (especially as children often mistakenly think that the larger the denominator, the larger the fraction). They are also good for comparing fractions which have the same value, such as 3/6 = 1/2 or 2/10 = 1/5 and so on. If you have the right sizes, fraction walls can be built from Lego. 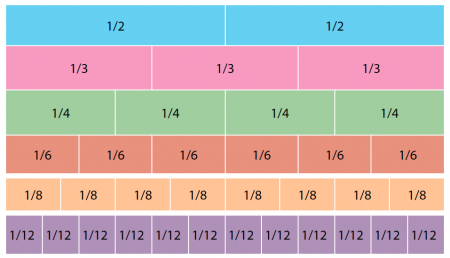 Play (or real) money is used in school when teaching the value of coins.

Younger children learning to count up to 20 may use pennies to buy items with prices like 5p or 2p, and move on to recognising that instead of 5 or 2 pennies, they could pay with a 5 or 2 pence piece instead.

As they move through school, children learn more about equivalent values of the coins, learn how to make the same amount using different coins, how to work out change and, by upper KS2, how to equate money to decimals when calculating totals such as £23.45 + £47.58.

Plastic or real money could be used at home to play a shopping game, or ask your child to work out the cost of a few simple items when out shopping, perhaps pointing out strategies to help when adding prices which end with 99 (by adding a pound and taking away a penny).

Numicon is a teaching resource designed to help children when they are beginning to recognise numbers and number relationships (at-home sets are available for around £40).

Each Numicon is a different shape and colour and represents a different number up to 10. Because it is multi-sensory, it helps children develop a visual image of what a number ‘looks’ like. They can develop their understanding of the relationships between numbers, for example by finding all the different combinations of Numicon which make 10. Older children can use Numicon to help understand decimal numbers, or to reinforce ideas they might find tricky.

Arrow cards are used in school to help children understand the ‘component’ parts of a number, and to help them learn how to partition.

For example, the number 456 can be partitioned into 400 and 50 and 6. When this number is made with arrow cards, it can be physically partitioned or ‘split up’ to show each part of the number.

Download a free set of arrow cards and use them at home to practise making numbers, especially larger ones, and to practise simple adding or subtracting, such as adding 20 to 341 (making sure that the tens column changes to 60, as some children may try to replace the 40 with 20!).

Multilink cubes are used for a variety of reasons, in particular to support children when counting.

Younger children may be asked to make cubes into groups of 5 or 10, to practise counting up in these steps. They may also be shown how to compare different amounts or divide groups of cubes accurately by grouping them together. When younger children are asked to measure using ‘non-standard’ units, it’s often multilink cubes which are used. Multilink are also good for making repeating patterns of colour or for showing that the same amount of cubes can be used to make different shapes. Older children might work with multilink to reinforce work on fractions or to solve problems to do with measure. Expect to pay around £10 for sets of 100 cubes, like Snap Cubes® from Learning Resources. 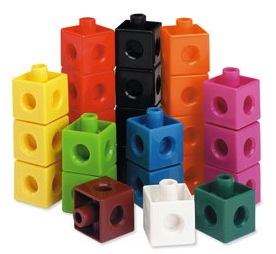 A counting stick is used a lot in school to practise sequences, number order and general counting skills.

Counting sticks are often just a metre stick, although some are more like a ten-sectioned broom handle! A KS1 teacher may use one to reinforce counting in ones or twos, promoting silent counting by asking what a particular section on the stick represents. A KS2 teacher may use a counting stick to practise harder sequences, like decimal or negative numbers (perhaps by holding the stick vertically and placing ‘0’ in the middle).

A simple counting stick can be made at home – even a cardboard one would work. Practise counting up in stages or pointing to a marker and asking what number it represents.

You can also download a free printable ruler and protractor from TheSchoolRun.

Best maths aid for telling the time: a clock face

Analogue clock faces are used to help children grasp the concept of time and to learn how to recognise what time it is.

Younger children may begin by recognising that the longer hand pointing to the 12 means ‘something o’clock’, moving on to recognising half past and quarter to/past. Older children may relate this to digital and 24 hour time, and solve problems relating to time, including those which use timetables.

A simple clock, either real or made from card (download a free clock template from TheSchoolRun), can be used to support your child when they are learning this tricky skill. Begin with pointing out the time as you complete familiar tasks, such as eating breakfast or going to school to help give them a sense of time. Move on to learning ‘o’clock’ and then half past/quarter past/quarter to. 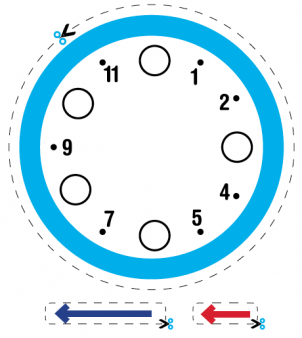 Maths aids around the house

Tablet toys can also be great early-maths aids: we recommend some of the best in our parents' guide to tablet toys.

You'll be amazed at the difference a few free props make to maths practice sessions!