What is a number line?

Spotted something about a number line in your child’s homework instructions, and not sure what it means? We review the basics of this amazing, adaptable educational tool and explain how it's used in KS1 and KS2 maths.
Login or Register to add to your saved resources

So, what is a number line?

A number line is just that – a straight, horizontal line with numbers placed at even increments along the length. It’s not a ruler, so the space between each number doesn’t matter, but the numbers included on the line determine how it’s meant to be used.

A number ladder is the vertical version of a number line.

How are number lines used?

Number lines can be used throughout a child's time at primary school, starting in Reception; ordering numbers is an important skill and children may be given a blank number line and asked to put a variety of numbers in order on it.

Number lines are often used in Key Stage 1 for demonstrating addition and subtraction. Children may be given a number line marked 0 - 10 or 0 - 20:

A child might be given the following question:
7 + 2 =
They will be shown how to put their finger on the 7 and then count on 2 until they get to 9. This makes the idea of a number increasing very visual for them.

For this question:
9 - 4 =
children will be asked to put their finger on the 9 and then jump back 4 until they get to 5.

Children start learning to count in 2s, 5s and 10s in Year 1 which then forms a basis for learning their 2, 5 and 10 times tables in Year 2. A number line can be very helpful for this, whereby they mark on jumps to show how to move from one number to the next.

In Year 3 and 4 a number line can be used to work out times table questions, for example: if a child is asked what 4 x 3 is, they could jump along a number line in 3s four times to reach the number 12:

Number lines can also be used for division. If a child has to work out 18 ÷ 3, they could put a mark on the 18 and then jump up to the 18 in 3s. They would then realise they had moved 6 jumps and therefore the answer is 6:

Children are often taught subtraction using a number line method called 'complementary addition' (the jump strategy). This method makes it very clear that subtraction means finding the difference between a smaller number and a bigger number. To use a number line to subtract with the jump strategy, put the small number on the left hand side and then the big number on the right hand side, then jump from one number to another and count up all the jumps at the end: 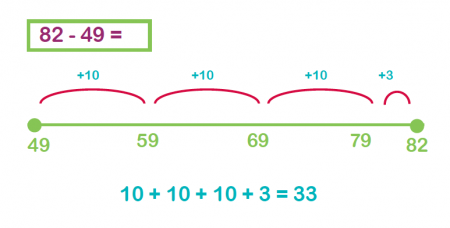 In Year 4, children start to use a number line to understand the concept of negative numbers:

From Years 4 to 6, children would need to  place decimal numbers and fractions onto a number line. For example, they may be asked to write what fraction this arrow is pointing at:

They may also be asked to write what decimal this arrow is pointing at:

Some teachers may also use an empty number line to demonstrate dividing larger numbers: 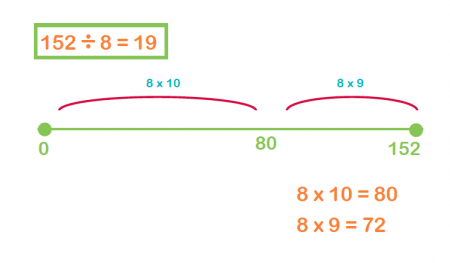 Are there different kinds of number lines?

Because the concept is so simple, number lines can pretty much take any shape you like. For example, they can extend vertically to help your child visualise the problem in a slightly different way – these are called number ladders.

Where can I get a number line?

You can print out number lines from TheSchoolRun, or draw one yourself using a ruler and the long side of a sheet of A4 paper. If you create number lines for your children to help them with their maths homework, add colours, shapes or favourite characters to make them a little more interesting – our versions have been designed to look fun.

Number lines are an invaluable tool all the way through a child's time at primary school. It is a really good idea to get children in the habit of thinking about whether drawing their own number line will help them to solve a problem.