What are multiples and factors?

We explain what multiples and factors are and how children are taught to recognise multiples from Year 1 and factors from Year 5, with examples of the types of problem they might be asked to solve.
Login or Register to add to your saved resources

What are multiples and factors?

A multiple is a number that can be divided by another number a certain number of times without a remainder.

A factor is one of two or more numbers that divides a given number without a remainder.

Multiples and factors are best explained by using a number sentence such as the following: 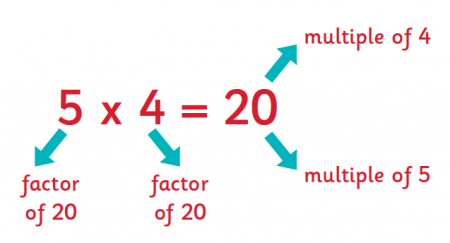 Multiples and factors in KS1 and KS2

In Year 2, children are expected to recognise multiples of:

The foundation for this knowledge is started in Year 1 where children practise counting in 2s, 5s and 10s.

By Year 4, when children have learnt all their times tables they should be able to recognise multiples of any number up to 10.

They may be asked to identify pairs of factors of two-digit numbers.

In Year 5, children will continue to carry out tasks involving factors and multiples and this will extend to learning about prime numbers and square numbers.

Example investigations for Year 6 children could be:

Two factors of 90 are added together to make another factor of 90. What are the two factors?

By Year 6 children need to be really confident not only on knowing what factors and multiples are, but also on quickly working out the factors and multiples of various numbers. This means they can take quickly to these sorts of puzzles. They might able be asked to find the lowest common multiple or highest common factor of two numbers or a group of numbers.