We explain what the symbols < and > mean and give examples of how the concept is explained to primary-school children.
Login or Register to add to your saved resources

These symbols are referred to as the 'greater than' and 'less than' symbols.

Working with greater than and less than symbols in KS1

Children do a lot of work in Key Stage 1 on understanding the size of numbers by looking at how many tens and units a number is made up of.

In Year 2 they will be introduced to the < and > symbols.

Often teachers will help them by telling them that the symbols are a crocodile's mouth and the crocodile wants to eat the bigger number!

Children will learn that the symbols are used in the following way to show whether a number is bigger or smaller than another number:

Often children will be given pairs of numbers and then asked to put the correct symbol in between each pair of numbers.

It can take children a while to work out the value of each number. Deines and arrow cards can help them to understand what each number is made up of: 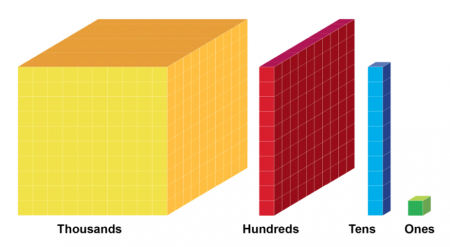 For example, if a child is really struggling with understanding two-digit numbers, a teacher might ask them to make up a number, say 49, using deines blocks. They would be expected to take 4 tens and 9 ones. They may then be asked to make up the number 25, for which they would need 2 tens and 5 ones. Hopefully, this would help them to visualise the fact that 49 is a bigger number than 25.

Arrow cards can be useful in helping children to realise that the number 83 is not made up of an 8 and a 3, but rather an 80 and a 3.  If you got a child to make up two numbers, say 38 and 74, you could explain to them that because 74 has more tens than 38, it is a bigger number. It is important that they realise that when working out which multi-digit number is bigger, the last unit does not matter, it is the tens (or hundreds, or thousands) that make the difference.

A number square can also be useful in showing children which of two numbers is bigger.

Imagine you are comparing 38 and 56. You could get a child to point out both numbers and then ask them which is further down the 100 number square. Since 56 is further down, this is the bigger number. It is very important for children to be able to count up to one hundred before they can understand the concept of which numbers are larger or smaller than others. 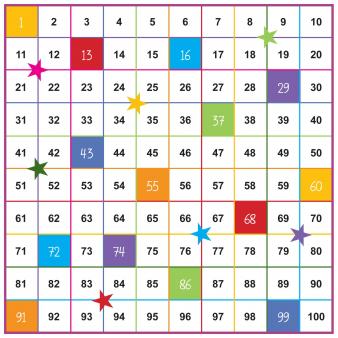 Once they have a firm grasp of the value of individual numbers children to be able to order a set of numbers, for example: