We explain what arrays are and give examples of how they can help children with their times tables learning and to explain the relationship between multiplication and division.
Login or Register to add to your saved resources

Arrays are a pictorial representation to help children understand times tables. For example, a child may be given the following word problem:

I have 3 bags. There are 5 pennies in each bag. How many pennies do I have altogether? 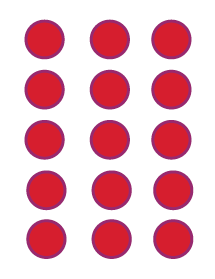 The teacher might then explain that rather than counting all the pennies individually, you could work out the answer by counting each line in 5s. The teacher could then point to each line and count 5, 10, 15 to show the children that there were 15 pennies in all.

Teachers in Key Stage 1 will teach children how to count in 2s, 5s and 10s and make sure they are very confident in this, before going on to show them how to work out times table problems like this one using arrays.

This is because children need to be able to count up in steps of different numbers before they can use arrays to help them.

In Year 3, children are expected to learn their 3, 4 and 8 times tables. Teachers may still use arrays for children struggling with their times tables at this stage. Many children find a pictorial representation helps them enormously with working out a worded problem.

Arrays: how they help children understand multiplication and division

Arrays are useful for showing children the relationship between multiplication and division (called 'the inverse'). If you showed a child the above diagram, you could explain to them that it shows 3 x 5 or 'three lots of five', but it also shows how 15 can be divided into 3 equal groups, or 5 equal groups, therefore it demonstrates the following four number sentences: 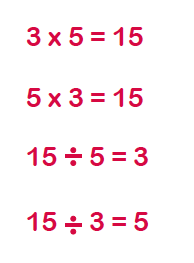