As children start to develop their own writing style in primary school they will be asked to use "cohesive devices" to improve their writing and help it flow. We explain what "cohesion" means in fiction and non-fiction writing.
Login or Register to add to your saved resources

The term 'cohesive devices' refers to the conjunctions, connectives and pronouns used to link the parts of a piece of writing. Using the same verb tense throughout a text also offers 'cohesion'.

Primary-school children may be asked to identify and use cohesive devices in their writing during their time at primary school.

Use of cohesive devices in primary-school writing

The 2014 primary curriculum states that children in Years 5 and 6 need to 'use a wide range of devices to build cohesion within and across paragraphs'.

Basically, when a person's writing has cohesion, an attempt has been made to link clauses, sentences and paragraphs so that the writing 'hangs together'.

This piece of writing shows how cohesive devices can be used: 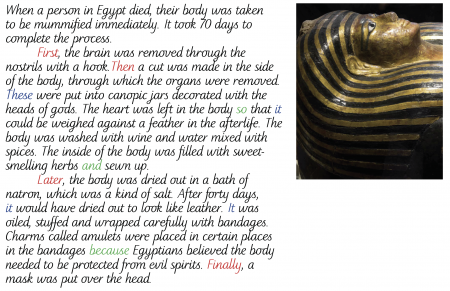 The time connectives (in red: first, then, later, after, finally) are used to show that this is a process that has several steps and an end goal. These words are also adverbs, because they tell us when something is done.

Conjunctions (in green: and, so, because) are used within sentences to link ideas within a sentence.

Which cohesive devices are taught to children throughout primary school?

In Year 1, children will start to write sentences and will be encouraged to use the connective 'and' to join clauses, for example: 'We went shopping and my mum bought lots of nice food.'

In Year 2, children will be encouraged to write longer pieces of writing and will be shown that the verb tense should remain consistent throughout a text (always past tense or always present tense). They will begin to expand on their use of connectives to join clauses of sentences, using connectives such as: when, if, that, because, or, but.

In Years 3 and 4, children will be taught how to compose fiction and non-fiction texts and introduced to the use of paragraphs. They will be expected to use pronouns to link one sentence to a previous one. They will be encouraged to use a wide range of conjunctions, such as: when, if, because, although. They will start to use fronted adverbials, which can help with cohesion when they are related to time (for example: First of all, After all the drama had unfolded, At the end of the meal etc.)

The aim of the above teaching is to help children get to a point in Year 5 and 6 where they can produce writing that shows a range of devices to aid cohesion.