What are comparatives and superlatives?

What are the comparative and the superlative?

Adjectives and adverbs have three different forms: the positive, the comparative and the superlative. 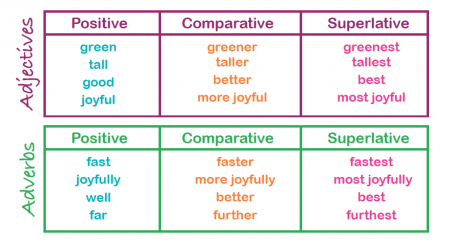 The comparative form is used to compare one person, thing, action or state to another:

The superlative form is used to compare one thing to all the others in the same category; in other words, when the comparison is taken to the highest degree possible, for example:

The comparative and superlative are formed differently depending on the word's positive form.

Children in Year 1 are taught how to use comparatives and superlatives (without being told that this is what they are called). They are taught that certain adjectives can have the endings (suffixes) -er and -est added to them to make new words, for example: dark / darker / darkest, fresh / fresher / freshest, etc.

Later in Key Stage 2, children will be taught how to add these endings to words ending in -y, for example: heavy / heavier / heaviest; happy / happier / happiest; nutty / nuttier / nuttiest.  (The rule here is that you remove the -y and then add -ier or -iest).

The correct term for the endings -er and -est is suffix (suffixes are groups of letters added to the end of a word). Children in Years 5 and 6 learn about various different suffixes and prefixes and how to add them to root words.

Are children tested on their understanding of comparatives / superlatives? 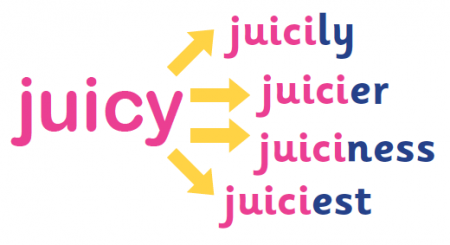 Possible answers are juicier, juiciest, juiciness or juicily, so the answer does not have to be a comparative (juicier) or a superlative (juiciest).

At-home practice to help with comparatives and superlatives