We explain what decimals are and how the concept is explained to primary-school children, as well as how they are taught to relate decimals to money and measurement, the equivalence between fractions and decimals, partitioning, rounding and ordering decimals and adding, subtracting, multiplying and dividing decimals.
Login or Register to add to your saved resources

A decimal is a number expressed in the scale of tens. Commonly speaking we talk about decimals when numbers include a decimal point to represent a whole number plus a fraction of a whole number (tenths, hundredths, etc.). 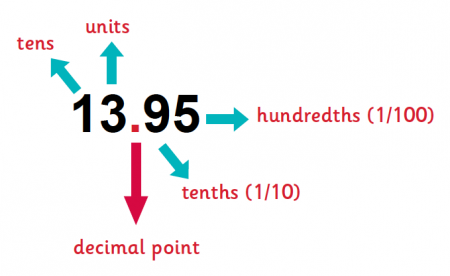 One of the best ways to describe decimals, is to show a child a blank hundred number square or number chart and explain that this represents 'one': 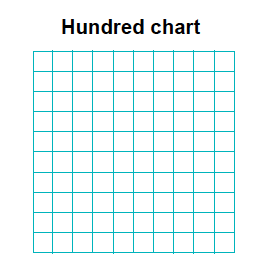 Children need to know that when we talk about decimals, it is as if we were splitting one whole up into smaller parts.

If you coloured in one of the squares in the above diagram, this would be represented as the decimal 0.01 (which is one hundredth or 1/100). 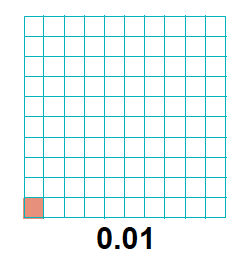 If you coloured in ten of the squares in the above diagram (therefore colouring in 10/100 or 1/10), this would be represented by the decimal 0.1 (children may write 0.10 because they have coloured 10 squares – you need to explain that the zeros after decimal points are always knocked off). 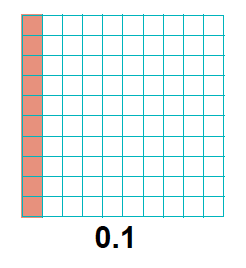 The place value of decimal numbers can be shown the following table:

A pictorial representation of this number is:

Learning about decimals in KS2

In Year 4, children need to understand the concept of a 'hundredth' and a 'tenth'.

They also need to know decimal equivalents to 1/4, 1/2 and 3/4. This diagram is a good way of making this concept clear to them:

Children in Year 4 also need to know the effect of multiplying and dividing numbers one-digit and two-digit numbers by 10 and 100 (teachers will talk about digits sliding to the left and right).

In Year 5, children need to count from any given number in decimal steps, so they may be given the following sequence and asked to continue it:

They also need to partition, round, compare and order decimals, for example:

Round 7.4 to the nearest whole number
(7, because the 4 is smaller than 5, so the number gets rounded down)

They may be asked to position a decimal number on a number line. For example:

Put 6.178 where you think it should go on this number line:

They also need to start calculating with decimals mentally, for example:

In Year 5, children need to continue to be able to work out equivalent fractions and decimals (for example: knowing that 0.71 = 71/100). They need to learn about thousandths and know that they are represented in the third column after the decimal point (0.001 = one thousandth = 1/1000), be able to round decimals with two decimal places to the nearest whole number and to one decimal place and be able to put a set of decimals in order from smallest to largest. For example:

Here, many children get confused and think that 0.19 must be bigger than 0.9 (because 19 is bigger than 9). It is a good idea to write 0.9 as 0.90 and then explain that the 0 gets knocked off. You could also show them a blank hundred number square and remind them that with 0.9, nine tenths of the 100 number square (so nine columns, each with ten squares) need to be coloured in. They may think that 0.412 is the biggest number, but remind them that because there are only 4 tenths, it is smaller than 0.9, 0.6 and 0.52.

In Year 6, children need to start multiplying and dividing numbers by 10, 100 and 1000 (for example: 65 ÷ 100, 5 ÷ 1000, 4.3 x 100, etc.). Again, teachers will say that the decimal point stays in the same place, but the numbers move left or right (depending on whether it is multiplication or division). The number of places they move depends on the number of zeros in the number being calculated with.

Learning about decimals is a long and involved process. It is a difficult concept which children can take a while to get the hang of. This is why laying down crucial groundwork in Year 4 is important: children need to be given many chances to order decimals and match simple fractions to decimals (using the blank hundred number square which they can colour in to help them). This means that they will properly understand what a decimal is before they can go onto calculating with them in Year 5 and 6.