We explain what degrees are and how children are taught to use protractors to measure angles, as well as reviewing the different knowledge children acquire about angles throughout KS1 and KS2.
Login or Register to add to your saved resources

Degrees are the unit of measurement used to measure angles. A right angle is 90˚, a straight line angle is 180˚ and a full turn is 360˚.

We use a protractor (also called an angle measurer) to measure degrees. 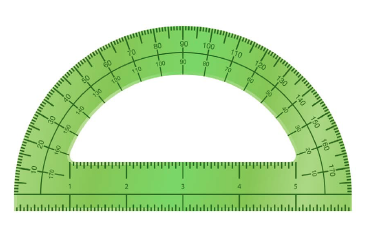 Protractors are marked from 0˚ to 180˚, from left to right, and then have the same markings going backwards from right to left.

Learning about angles in primary school

Children start learning the language of direction in Year 1, when they talk about whole, half, quarter and three-quarter turns. Learning about quarter, half and whole turns is the foundation for learning about angles, a concept which is built on gradually, year after year.

By the end of Year 2, they should be able to talk about these turns, but explain which direction they are going in: clockwise or anti-clockwise. During Year 2, children will also learn to tell the time to the quarter hour, so they should be aware of the direction in which the hands on the clock move.

In Year 3, children will need to recognise right angles and to know that two right angles makes a half turn, three make three-quarters of turn and four a complete turn. They need to identify whether angles are greater than or less than a right angle.

In Year 4, children need to know about acute and obtuse angles.

In Year 5, children start using a protractor to measure acute, obtuse and reflex angles. Children also need to calculate angles around a point, on a straight line and within 90°.

In Year 6 children will need to rotate shapes through 90° or 180°. They will need to use a protractor to measure and draw angles and calculate angles in a triangle or around a point. They will also need to find unknown angles in triangles, quadrilaterals and regular polygons.

When measuring and drawing angles, children should be very confident reading a protractor by the end of KS2.

It is also very important for them to be able to check their answers by looking at the angle and deciding (just by eye) whether it is bigger or smaller than 90˚ or 180˚. 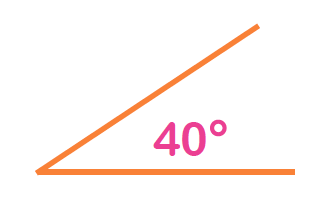 They would need to use their knowledge of angles to look at their answer and realise that this cannot be correct.

Calculating angles inside a triangle and around a point

When calculating angles inside a triangle, children should know that the inside angles of a triangle always add up to 180˚. They will often be given a diagram, not to scale, as follows:

When they need to calculate angles around a point, they will again be given a diagram which is not to scale, for example: 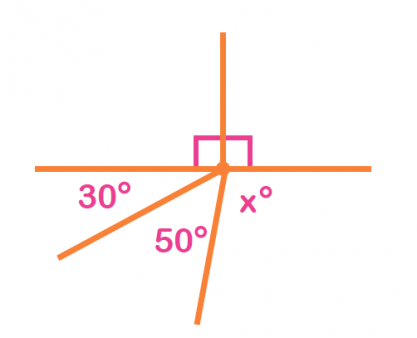 To calculate the value of angle x they will need to remember that a full turn is 360˚. To find the answer they will need to subtract 30˚ and 50˚and 90˚ (which is represented by the square symbol) twice from 360˚, which equals 100˚.