What are Roman numerals?

Children in KS2 are expected to read and write Roman numerals as part of the primary curriculum. We explain how Roman numerals are introduced in the classroom and how you can help your child practise reading Roman numerals at home.
Login or Register to add to your saved resources

What are Roman numerals?

Roman numerals are the numbers that were used in ancient Rome, which employed combinations of letters from the Latin alphabet (I, V, X, L, C, D and M).

Numbers are represented by combinations of the following symbols:

Numbers are represented by putting the symbols into various combinations in different orders. The symbols are then added together, for example, I + I + I, written as III, is 3. To write 11 we add X (10) and I (1) and write it as XI. For 22 we add X and X and I and I, so XXII.

Roman numerals are usually written in order, from largest to smallest and from left to right, but more than three identical symbols never appear in a row. Instead, a system of subtraction is used: when a smaller number appears in front of a larger one, that needs to be subtracted, so IV is 4 (5 - 1) and IX is 9 (10 - 1).

The subtraction system is used in six cases: 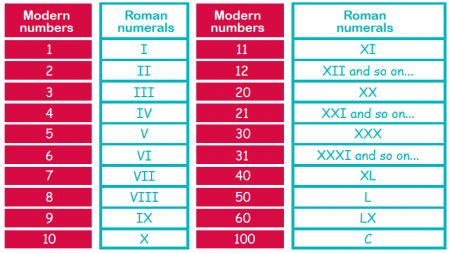 When do children learn about Roman numerals in primary school?

Under the 2014 curriculum, children are required to know what Roman numerals are and be able to decipher and write them. The previous numeracy framework did not make any mention of Roman numerals, so this is a new concept introduced into primary schools.

These are the objectives related to Roman numerals that are introduced in Key Stage 2:

Year 3
Tell and write the time from an analogue clock, including using Roman numerals from I to XII, and 12-hour and 24-hour clocks

Year 4
Read Roman numerals from 1 to 100 (I to C) and know that, over time, the numeral system changed to include the concept of 0 and place value

Helping your child with Roman numerals at home

Roman numerals are still used in a number of ways in the modern world:

You can help your child to feel more comfortable with Roman numerals by encouraging them to look for Roman numerals at the end of TV programmes or to show publication dates of books. Encourage them to use the table above to try and work out what the dates are. You could also give them various numbers to translate into Roman numerals or try some of TheSchoolRun's Roman numerals puzzles and worksheets (see below).

And why not download and print our free Roman numerals dice and use them instead of normal dice when playing games?