What are speech marks?

Understand how speech marks (or inverted commas) are used when punctuating direct speech with our grammar guides for primary-school parents.
Login or Register to add to your saved resources

What are speech marks?

Inverted commas (also known as speech marks and quotation marks) are punctuation marks that show us where direct speech starts and ends.

Speech marks are not used if we are writing indirect (reported) speech. 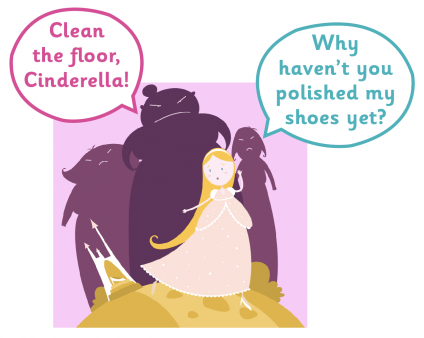 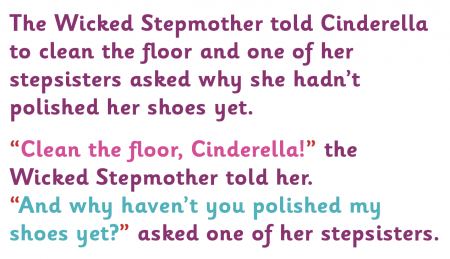 How are speech marks used?

Speech marks or inverted commas are used to show what the words actually spoken by a person or character are. Direct speech is separated from a reporting clause by a comma. For example:

As demonstrated in the example, the words spoken directly (Although I wish they wouldn't my children fight all the time) are marked by speech marks. The words spoken have also been separated by a reporting clause (she sighed).

When two or more people are having a conversation, a new line for each speaker is used, as this clarifies who is speaking. For example:

How are speech marks taught in the primary classroom?

When speech marks are first introduced in Year 3, there is a lot of use of drama and reading class texts aloud. Children will identify direct speech within texts they are reading as a class.

In Year 4 there is more focus on multiple speakers.

In Years 5 and 6, children will be taught and expected to use the correct punctuation for speech, with multiple speakers and reporting clauses breaking up the direct speech.

When are speech marks taught in the primary-school classroom?

Inverted commas are first taught in Lower Key Stage 2, in Year 3. As punctuating direct speech is a fundamental primary-school writing objective, the use of speech marks will be reinforced in every subsequent year group.

In Year 3, teachers will focus more on simply punctuating the spoken words with inverted commas to indicate the specific words that have been spoken. In Year 4, this progresses onto using commas to separate the reported clause from the direct speech, and then using other forms of punctuation other than full stops within the inverted commas. For example:

In Years 3 and 4, children learn that the reporting clause can be positioned before or after the direct speech in the sentence.

During the SATs Spelling, Grammar and Punctuation test taken at the end of Year 6, children are also likely to be asked a question about inverted commas and/or the correct punctuation needed to show speech. For example: 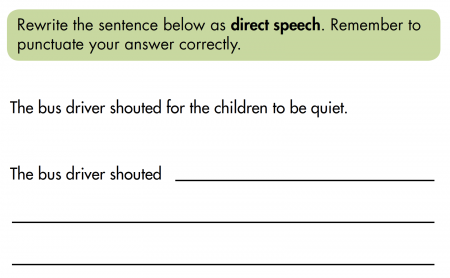 By the end of Year 6, when a child’s writing is assessed, they will be expected to use speech to move the action in their stories forward and to punctuate correctly.