What is the Y6 Grammar, Punctuation and Spelling test?

Year 6 children are all tested on their spelling, punctuation and grammar as part of the KS2 SATs. So what will your child need to know, and how can you help them brush up their skills? By Lucy Dimbylow.
Login or Register to add to your saved resources

What is the SPAG test?

The English grammar, punctuation and spelling test (informally known as the SPAG test) was introduced in May 2013 as part of the KS2 SATs programme for Year 6 pupils, replacing the previous English writing test.

‘The Government wants all children to leave primary school with a sound grasp of essential English skills,’ a Department for Education (DfE) spokesperson saidd at the time. ‘The test will put an additional focus on writing skills and encourage good teaching.’

In May 2016, the SPAG test was updated (in line with the new primary curriculum) and was made more challenging.

Since 2016 children have also been tested on spelling, grammar and punctuation as part of the KS1 SATs in Year 2, though the SPAG paper has not been statutory every year so schools have been able to choose whether to adminster it or not.

What does the SPAG test examine?

The SPAG test includes questions that assess the following elements of the English curriculum:

Prepare for the KS2 grammar test

What sort of questions will your child need to answer?

Paper 1 requires multiple choice or short sentence answers, covering areas such as using connectives (because, despite, however, etc), using pronouns (I/me) correctly, capitalising the correct words in a sentence and explaining why, putting the correct punctuation into a given sentence, writing sentences that illustrate two different meanings of the same word (such as ‘present’), identifying the verb/noun/adjective/clauses in a sentence, and using plurals correctly. For example:
Q: Which ending would make the word lazy an adverb?
A: laziness/lazily/lazier/laziest
Correct answer: lazily
Paper 2 is a spelling test, where children will have to spell words dictated by the examiner (presented within sentences). For example:
Pria turned on the television to watch her favourite cartoon.

What skills and knowledge do children need to succeed?

‘The ability to write with purpose, accuracy and clarity, drawing on a wide range of vocabulary, is integral to success,’ says a DfE spokesperson.

But for your child to do well in the SPAG test, they don’t just have to be good at writing; they also need a technical understanding of how the English language works.

As well as being able to spell words correctly, use a wide range of vocabulary and punctuate well, they need to grasp the meaning of grammatical terms such as noun, verb, adjective, prefix, pronoun and adverb, know what phrases and clauses are and how to use them, understand what connectives are and how they work, know how to turn a question into a command, and so on. This terminology can be a stumbling block even for children who are otherwise good at reading and writing, and make the questions hard to understand; for a parent-friendly guide to the vocabulary and how English and grammar concepts are taught in primary school see our primary literacy glossary for parents.

How can you help your child practise at home?

There are plenty of other ways to help your child revise for the test:
TheSchoolRun also offers a selection of grammar worksheets and spelling practice worksheets – browse through our resources to find the right ones for your child, as well as looking through our SPAG 'mock' papers, available to subscribers.

Can I see some examples of the KS2 SATs grammar test?

Yes – look through our selection of free official past papers for KS2 SATs and subscriber-only mock papers.

TheSchoolRun has also produced SPAG-only practice papers, written in the style of the pre-2016 test, which are available to subscribers (click on the images below to access each paper). 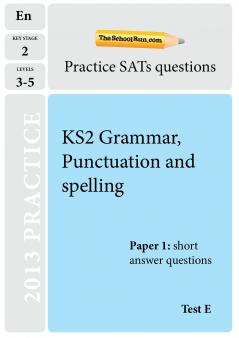 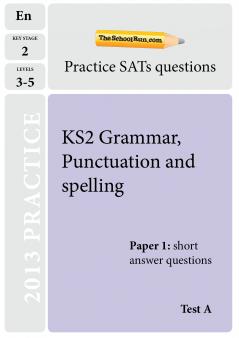 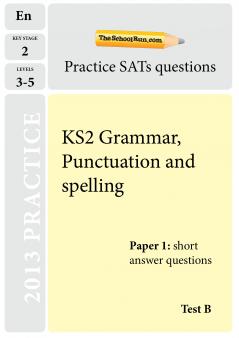 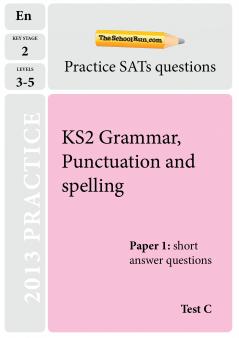 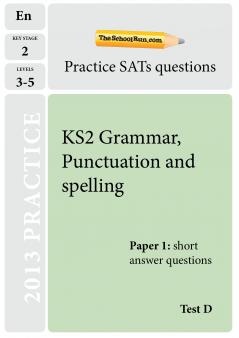