We explain what chunking is and how this division technique is taught in primary school to help your child divide large numbers.
Login or Register to add to your saved resources

Chunking is a method used for dividing larger numbers that cannot be divided mentally.

Chunking is repeated subtraction of the divisor and multiples of the divisor – in other words, working out how many groups of a number fit into another number.

The purpose of chunking is for children to be able to think about the relationship between multiplication and division. It involves using rough estimates of how many times a number will go into another number and then adjusting until the right answer is found. Once these skills have been practised, teachers will often encourage children to move onto the quicker 'bus stop' division method.

Here is an example of how you could divide 12 by 3 using chunking: 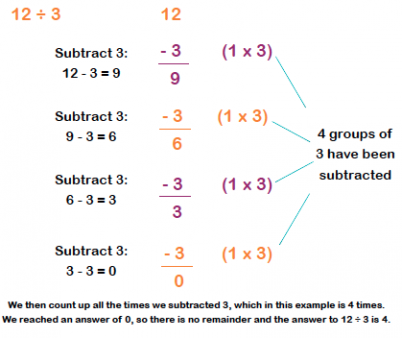 Chunking with remainders is the next stage in children's understanding: 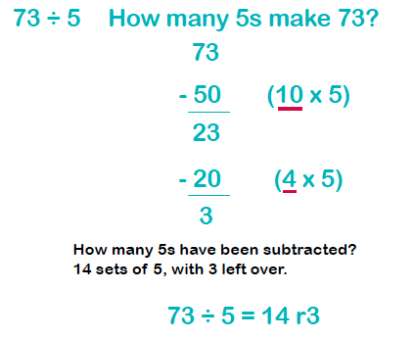 Finally children begin to use division notation, writing down their chunking calculation in this format: 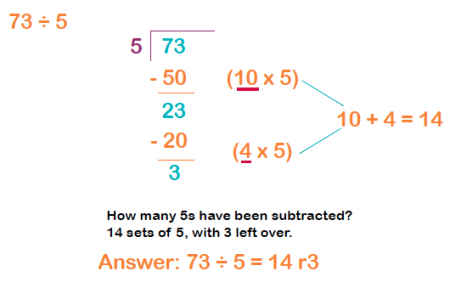 Chunking can be helpful with problem-solving where the answer has a remainder, for example:

167 people are going on a trip. They are going to travel on coaches that each hold 45 people. How many coaches will be needed?

You could work this out doing the following:

As part of the new national curriculum introduced in September 2014 teachers have re-introduced the long division method as the recommended way to divide large numbers, so children will probably move on from chunking to use long division in Years 5 and 6.