We explain what teachers mean when they talk about finding 'the difference between' and give examples of how children are taught to work out the answers to subtraction problems.
Login or Register to add to your saved resources

Teachers will often ask children to find the difference between two numbers. It can take children a while to work out what this means (if you ask a child what the difference is between 7 and 8, they might say the 7 is made of straight lines and the eight is made of curvy lines... quite a logical answer!)

It is important that children learn that when we say: 'What is the difference between 1 and 6?' we mean: 'How many numbers do you count up from 1 to get to 6?' or 'What is 6 subtract 1?'

Children can be encouraged to use their fingers or a number line to work out the answer. If they used their fingers, they would need to have the 1 in their head, then count on their fingers to get to 6, holding up 5 fingers, which is their answer.

If they used a number line, they could put their finger on the 1 and then 'jump' up to get to the 6, counting as they go along:

Subtraction on a number line (complementary addition or the jump strategy) 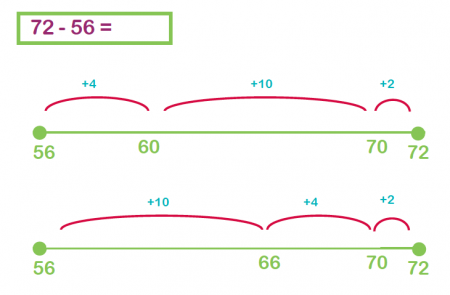 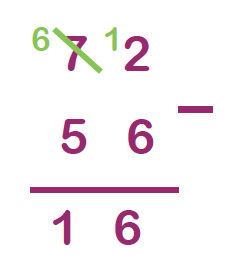 It is very important that children become confident in finding the difference between two numbers (up to four digits) by the end of Year 4. In Years 5 and 6 a lot of the emphasis is on multiplication, division, decimals, fractions and percentages, whereas addition and subtraction will not be practised as much. Therefore, children need to be confident in their mental and written subtraction before moving onto later Key Stage 2.