What is a command?

Command sentences and imperative verbs explained for parents, with examples and details of how commands are taught as part of the primary-school grammar curriculum.
Login or Register to add to your saved resources

What is a command?

Commands are a type of sentence in which someone is being told to do something. There are three other sentence types: questions, exclamations and statements.

Command sentences usually, but not always, start with an imperative (bossy) verb because they tell someone to do something. The teaching of commands should come after children have been taught and can identify the following word classes: noun, verb, adjective and adverb. Once they know these, they can begin work on commands and the use of imperative verbs.

Imperative verbs (like fetch, fold, chop, catch, cook or add) are a feature of instruction text.

How are children taught about command sentences?

Children will often be introduced to command sentences in a practical way, by perhaps making something in class together, such as a paper airplane or simple buns. Led by the teacher, they class will discuss how to tell each other how to make the item. This will develop into naming the words they are starting their sentences with; this is when imperative verbs will be mentioned.

Progress will be made towards moving the class from simply identifying imperative verbs in sentences, to writing their own command sentences based on a stimulus. For example, they might be asked to describe the process of making toast, or to write instructions on how to build a tent.

In Upper Key Stage 2, children will be encouraged to write not only instructional texts (such as How to Build an Anderson Shelter) but also progress onto incorporating commands into direct speech. For example:

Children will begin to incorporate commands into their writing with more fluency, across a broader range of text types, by the end of KS2.

When are commands taught in the primary grammar curriculum?

Children are taught what commands are and how to write them once they reach Year 2, though many teachers choose to introduce the word ‘command’ to children in Year 1. They are revised in each year group, usually through the form of instructional writing.

It is likely that children will be tested on their understanding of command sentences in KS1 SATs and KS2 SATs, with questions such as these: 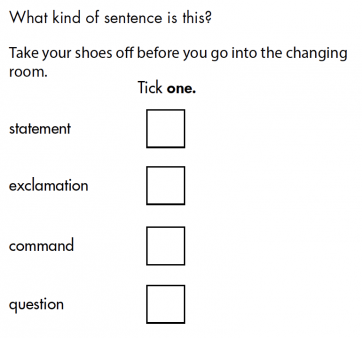 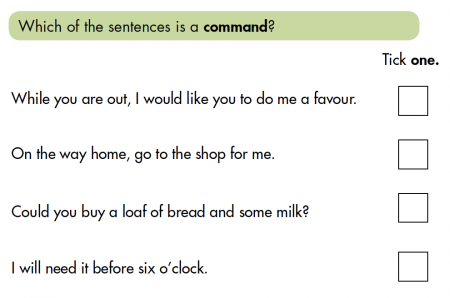 Once children have a firmer grasp of writing direct speech in Upper Key Stage 2, children will be taught and expected to use commands in both instructional writing and within direct speech across a range of text types to demonstrate their ability to adapt their writing style to suit the text type.