We explain what symmetry is and how primary-school children are taught to find the line of symmetry and draw lines of symmetry on different shapes.
Login or Register to add to your saved resources

Something is symmetrical when it is the same on both sides. A shape has symmetry if a central dividing line (a mirror line) can be drawn on it, to show that both sides of the shape are exactly the same.

Learning about symmetry in primary school

Children start to learn about symmetry in Year 2, where they might be given the following shapes and asked to draw lines of symmetry on them. Often, it is a good idea for children to be given cut out shapes which they can fold in half, so that they can be really clear that one side is the same as the other: 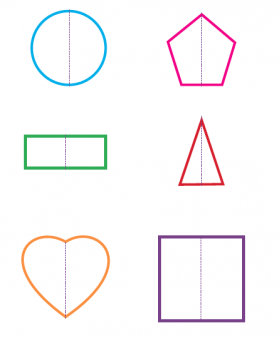 In Year 4, children are asked to identify lines of symmetry in 2D shapes presented in different orientations. They will need to become aware that shapes have more than one line of symmetry. They may be asked to look at these regular shapes and think about how many lines of symmetry they can find. Again, it is helpful for them to cut out the shapes and fold them in half, then look at how many folds they have made.

They might also be asked to classify shapes according to various properties, including line symmetry. They may be given a group of shapes and asked to put them into a Carroll diagram as follows:

In Year 6 children will be asked to draw shapes on the co-ordinate plane and then reflect them in the axes so that they appear in all four quadrants (see below).

Reflecting shapes in a mirror line

Children will also be given a quarter of a shape and then asked to reflect it in two mirror lines, for example:

Alternatively, they may be given a shape with shaded squares reflected in two mirror lines and asked to complete the shading of the squares:

In Year 6, children may be given a shape on some squared paper and asked to reflect the whole shape in two mirror lines. For example:

Sometimes symmetry is combined with coordinates. A child may be shown a shape as follows and then asked to reflect it in the mirror line and then write down the co-ordinates of 'A' on the reflected shape (in the example below the reflected A vertex would have the coordinates 3, 7). 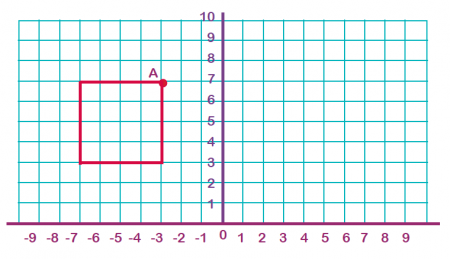