We explain what coordinates are and how children are taught to read and plot coordinates on a grid.
Login or Register to add to your saved resources

Coordinates are numbers which determine the position of a point or a shape in a particular space (a map or a graph).

In primary school children are taught Cartesian coordinates, which they are introduced to in Year 4. Points are marked by how far along they are on the x axis (the horizontal axis) and how far up they are on the y axis (the vertical axis).

Children will be shown a grid like the following, with numbers along the x axis and the y axis: 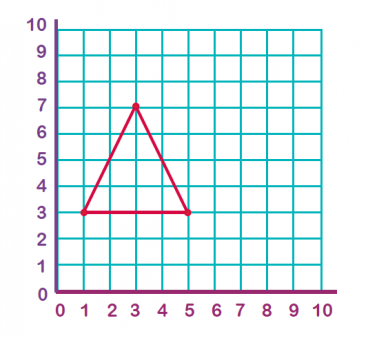 The coordinates of the left-hand corner of this triangle are (1, 3).

How to read and plot coordinates

When reading or plotting coordinates you always go across first and then up (a good way to remember this is: 'across the landing and up the stairs').

Children start to learn about co-ordinates in Year 5. For example: they may be shown the above triangle and asked to write the three coordinates for the three vertices of the triangle. This would constitute reading coordinates. They may then be given a blank grid and asked to plot the following coordinates: (1, 1) (4, 1) (1, 3) and (4, 3) then join up the points to make a shape (which in this case would be a rectangle).

In Year 6, children learn to draw, locate and complete shapes that meet given properties. For example:

They may also be asked to reflect, rotate or translate a shape on a coordinates grid and then give the coordinates of the new shape they have drawn.

In Year 5 or 6, a child might be given a shape that has some coordinates marked on, but where the coordinates grid is not marked. They will then need to work out the coordinates of the unmarked vertex of the shape, for example: 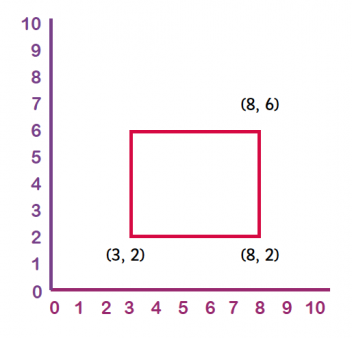 In this case the unmarked coordinates are (3, 6).

In Year 6, children are sometimes asked to work out coordinates in all four quadrants. This means they have to think about negative and positive numbers. For example: 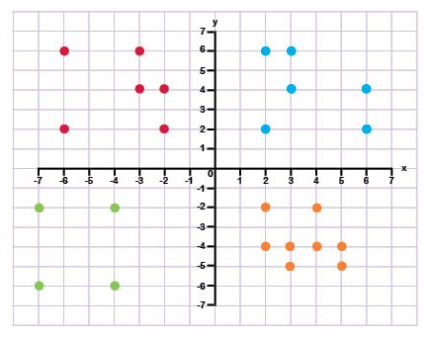