Can you name the 2D shapes we classify as quadrilaterals? Find out how your child will learn about four-sided, 2D shapes in primary school and try some hands-on activities to reinforce their learning at home.
Login or Register to add to your saved resources

A quadrilateral is a four-sided two-dimensional shape. The following 2D shapes are all quadrilaterals: square, rectangle, rhombus, trapezium, parallelogram and kite. 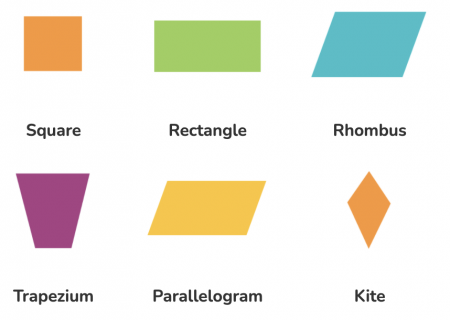 What are children taught about quadrilaterals in primary school?

In Year 1 children will learn the names of 2D shapes, such as rectangles and squares. They may be shown 3D shapes and asked to say if these have square or rectangular faces.

In Year 2, children will start to look at symmetry in squares and rectangles. They will be asked to draw lines of symmetry on these shapes.

In Year 3, children may be asked to draw 2D shapes such as squares and rectangles. They will also start to learn about right angles and will therefore learn that squares and rectangles each have four right angles. They will also learn the terms parallel and perpendicular and will need to identify parallel and perpendicular lines in quadrilaterals.

In Year 4, children are taught the term quadrilateral and will be asked to determine whether a certain shape is a quadrilateral or not.

In Year 5, children will be asked to draw shapes to a given criteria (for example: draw a quadrilateral with an obtuse angle and a right angle). They will also need to use their knowledge of quadrilaterals to find missing lengths and angles.

In Year 6, children are taught that the internal angles of a quadrilateral add up to 360 ̊. They will use this information to find missing angles in quadrilaterals. 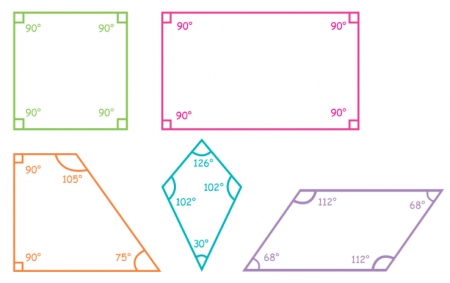 What questions on quadrilaterals might be in KS1 SATs?

Children might be asked show they understand what a quadrilateral and what quadrilaterals' properties are is by answering a Carroll diagram question like this one: 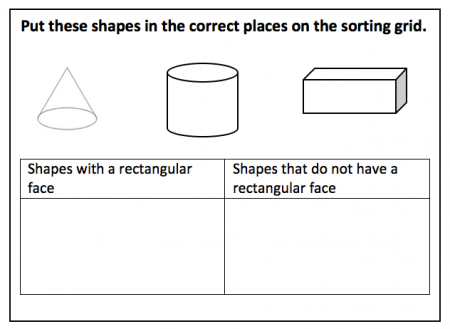 Answer: Child would need to draw a line directly through the centre of the shape (as accurately as they could manage), either vertically or horizontally.

What questions on quadrilaterals might be in Y6 maths SATs?

Children might need to show that they know that the four internal angles in a quadrilateral always add up to 360 ̊:

Answer: We know that this shape has two right angles (90 ̊) and one angle measuring 43 degrees. As the internal angles of a quadrilateral always add up to 360 ̊, the missing angle is 137  ̊.

Another question type might require your child to draw a quadrilateral following specific instructions, for example: 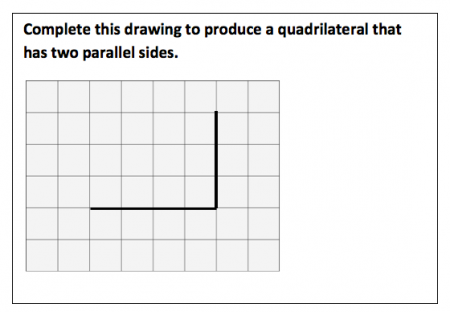 Answer: Parallel sides are sides that are always the same distance apart and can never meet. The answer to this question could be completing the diagram to make a rectangle, or drawing a shape with two right angles and one acute angle, similar to the shape shown in the previous question.

Help your child to learn about quadrilaterals at home