We explain what the term 'shared between' means and give examples of typical division problems your child might be set in KS1 and KS2.
Login or Register to add to your saved resources

'Shared between' is a term used in word problems that involve division. An example of such a Key Stage 1 problem might be:

Nathan has 20 sweets. He shares them equally between his four friends. How many sweets does each friend get?

Teachers will often give children counters to work out these problems. They may encourage them to draw stick men to represent the four friends, and then show them how to share the counters equally between the four friends, by giving one to each child until there are none left.

In Year 2, children would be introduced to various symbols including ÷ and would need to know that this symbol means 'divide' or 'share'.

In Year 3, children may still come across the word 'share' and will be moving onto dividing larger numbers by one-digit numbers, such as 50 ÷ 4.

As children get more confident with their times tables and start to learn how these are related to division, children (especially in Year 3) are encouraged to use the inverse to work out problems like the above one. So instead of sharing 20 counters into 4 equal groups, they realise that the above problem would be written as a number sentence like this:

They would then use their knowledge of times tables and the inverse to remember that 4 x 5 = 20, therefore the answer must be 5.

Children in later Key Stage 2 will still come across the word 'share' in their maths problems. In Year 6 children need to be able to mentally divide a decimal by a unit. For example in the following problem:

I have 1.2 litres of orange juice. I need to share this equally between six people. How much orange juice will each child get?

Children at this stage should also have efficient methods for dividing larger numbers. For example, they may come across a problem as follows:

Here a child could use the bus stop method: 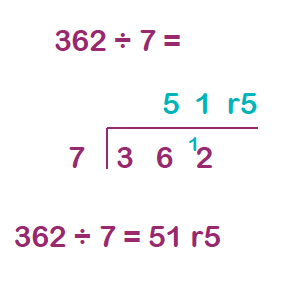