Your child will learn about the subjunctive form as part of the Year 6 grammar curriculum. We explain what KS2 parents need to know about this verb form and how to recognise and use it correctly.
Login or Register to add to your saved resources

The subjunctive is a verb form or mood used to express things that could or should happen. It is used to express wishes, hopes, commands, demands or suggestions. For example: 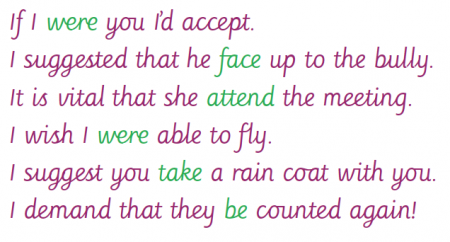 The subjunctive is the same as the (indicative) verbs we use in almost every case, but it is different in the third person singular and when using the verb to be. For the subjunctive we remove the final s at the end of the verb, so

and in the subjunctive we use the forms I were and they be, so

The subjunctive isn't used in English very often. Nowadays it is usually replaced by modal verbs like might, could or should, but it does survive in traditional expressions like 'come what may', 'perish the thought' or 'God save the Queen'.

What are children taught about the subjunctive at primary school?

Children are not taught the subjunctive until Year 6. In order to be able to recognise it they might look at a list of verbs and expressions that use the subjunctive, for example:

What subjunctive questions might children be asked in the KS2 SPAG test?

The subjunctive may appear in the Year 6 Grammar, Punctuation and Spelling test.  For example, with a question similar to the following:

How will the subjunctive be taught in the classroom?

Teachers might help children to learn about the subjunctive in the following ways: