Handwriting is a vital skill for primary school children to master. We've rounded up the best apps to help your child learn. It’s always best to check with your child’s teacher before introducing a handwriting app to ensure it complements – rather than contradicts – the methods they’re using at school.
Login or Register to add to your saved resources 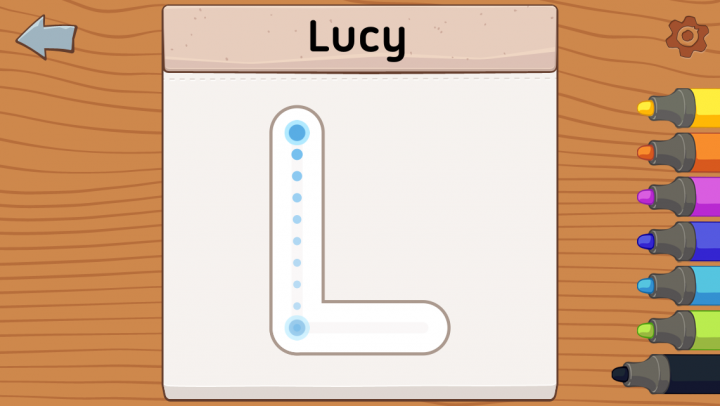 The app clearly demonstrates how to form each letter, with directional lines showing how your child should write each stroke. It features three different styles of handwriting, changeable in the parents’ area, to account for the varying styles taught in schools. Your child is encouraged to form letters with their finger first, then move on to using a stylus as they progress. They earn rewards for time spent practising.

A useful feature of the app is that you can add your own words to the database – perfect for helping your child practise handwriting and spellings at the same time. It saves their progress history so you can see how they’re doing. 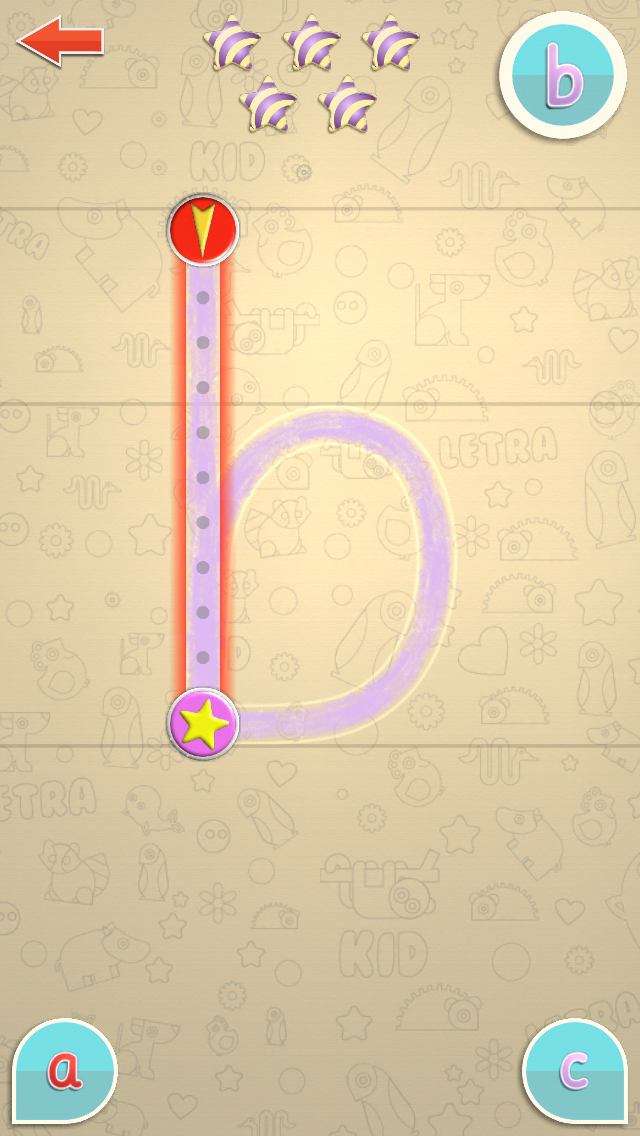 LetraKid PRO is aimed at children aged four to eight, and helps them progress with their handwriting through five levels of difficulty.

Improve handwriting in 10 minutes a day

The app begins by showing your child the correct way to write upper case and lower case letters and numbers from 0 to 9, with starting points, checkpoints, directional arrows and order of strokes. Your child follows these through levels 1 and 2 to help them get to grips with letter formation, with encouraging sound and visual effects. Difficulty levels 3 to 5 then focus on freehand letter formation using either their finger or a stylus, and gives your child feedback for each letter. This promotes fine motor control and builds confidence.

The handwriting activities are interspersed with fun letter recognition games, and they can also try writing symbols like smiley faces to improve their pencil control and dexterity, with stickers to earn as they progress through the app. 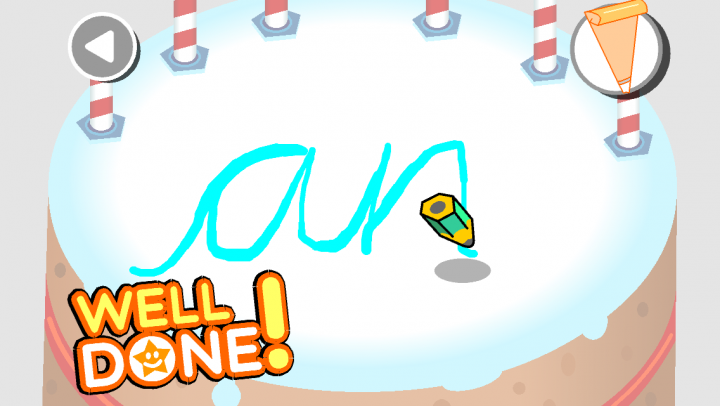 Mastering writing single letters is one thing, but good handwriting requires your child to know how to join them correctly. Crazy Cursive Letters helps by showing them how to write 100 high frequency words encountered in Reception and KS1.

The app introduces words in groups of four, with your child having to trace over each one correctly. Helpfully, the guidelines disappear once they’ve written the word, so they can see what their actual handwriting looks like: useful for correcting problems. Once they’ve reached a satisfactory standard in all of the words in a group, they unlock a new pen, and they unlock a new character or scene with every four words written correctly.

Crazy Cursive Letters also lets your child practise writing single letters, add their own words to the database – good for practising spellings – and gives kids feedback on which words they’ve got sussed, and which need more focus. 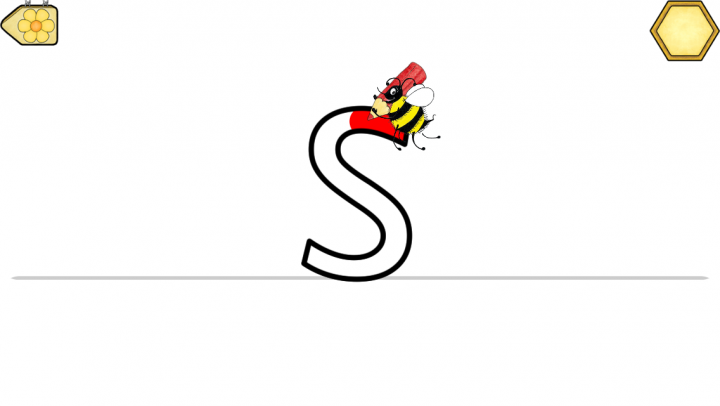 Phonics is the system used to teach reading in primary schools, and many follow the Jolly Phonics scheme. Jolly Phonics Letter Sounds introduces children to the sounds that are the building blocks of reading and writing, and helps them learn to read and write them, too.

The app introduces the main 42 letter sounds (including digraphs) in the English language in the order they’re taught at school. Each time a new letter or sound is introduced, the app sounds it out and then clearly explains how to write it, with both verbal instructions and directional arrows to follow. Your child can then try writing it themselves using their fingertip.

You can choose whether your child should practise print or pre-cursive (joined) letters, and there are also activities to help them with their blending and decoding skills. To keep your child motivated to learn, there are seven bonus games to unlock as they progress through the app. 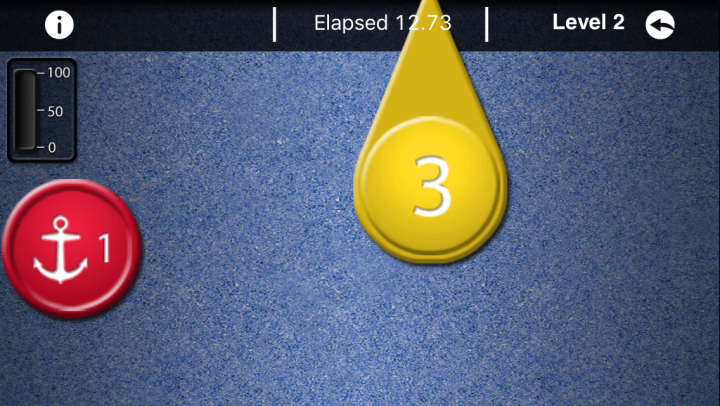 Dexteria is an app designed in conjunction with occupational therapists to build the fine motor skills that children need in readiness for handwriting. It’s ideal for young children who are just beginning to write, as well as older children who have difficulty with fine motor activities.

There are two separate exercises that improve finger and hand strength, control and dexterity. ‘Pinch’ involves pinching the crabs that move around the screen to make them disappear as quickly as possible. ‘Tap’ requires your child to tap on coloured dots as they appear on screen, using the correct finger. There’s also a letter formation exercise which guides children through writing upper case and lower case letters, following the guide dots.

The app generates automatic progress reports showing how your child is doing, and is best used in short bursts on a regular basis. 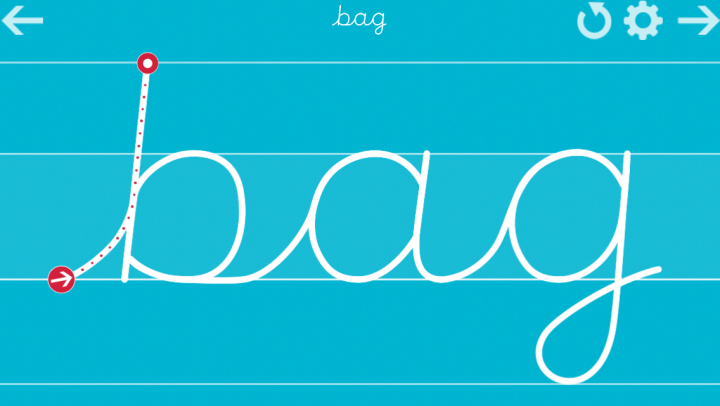 Many UK schools now teach children cursive writing – a particular style of joined handwriting – right from Reception. Cursive Writing Wizard will help your child master writing cursive letters, with their lead-in and exit strokes, and then begin joining them together.

The app has sections where your child can learn to form upper case and lower case cursive letters by tracing them with their finger or a stylus, following the directions on screen. Once they’ve formed a letter correctly, they’re rewarded with sound effects and animations, bringing that letter to life. As they get more confident, they can move onto the Words section, which helps them practise joining cursive letters in common combinations by writing joined-up words. You can also add your own words, so they can try out a wider variety of joins.

Cursive Writing Wizard includes a pre-writing shape tracing activity for pre-schoolers, and you can also print pdf worksheets from the app so your child can practise with pencil and paper. 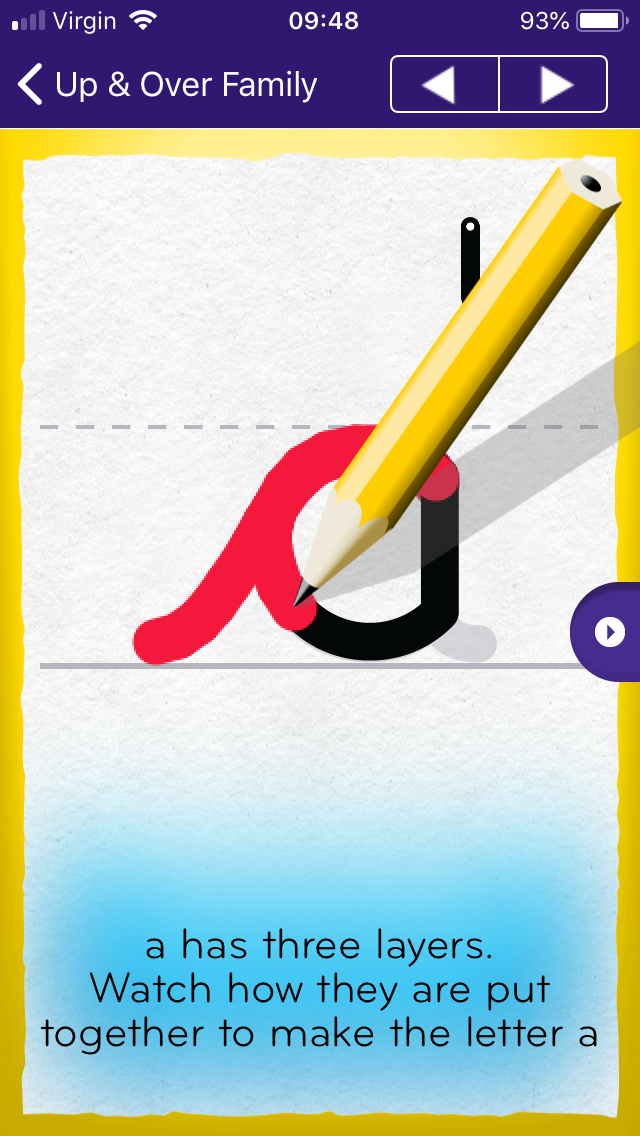 abc Joined Up was awarded Best Educational App for Handwriting by iPad Kids magazine, and deservedly so: it’s a really clear and informative handwriting practice tool for kids of all ages.

The app, developed by a specialist literacy teacher, has three levels. Beginner level teaches children to recognise letters by their sounds, and to write individual cursive letters correctly on the screen with their fingers. It groups the letters into ‘families,’ based on how they’re formed: Up and Over Family (a, c, d etc) and Straight Up Family (b, h, j etc). Intermediate level teaches children to start joining letters together, grouped into joins from the bottom (ch, gg, nn etc) and joins from the top (ba, on, ra, etc). And in expert level, your child has to write cursive words that include common joins, (fish, queen, zip etc) using their finger or a stylus.

The app features really clear verbal and written instructions, breaking each letter down into its constituent strokes, with guidelines to follow. It also rewards your child for success with positive feedback and animations. 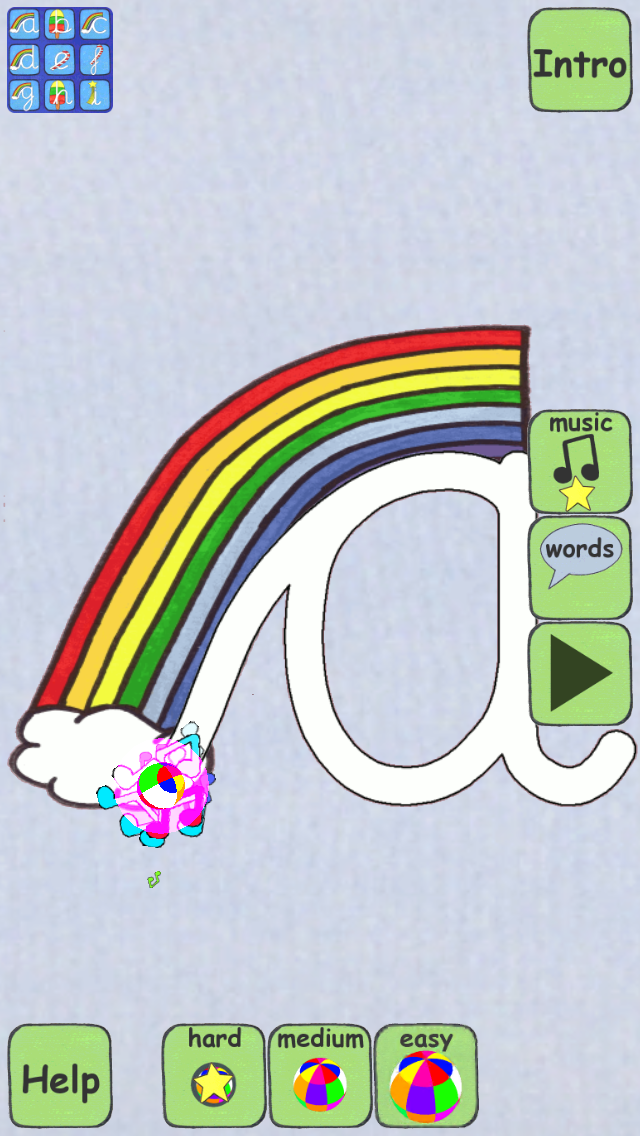 Children often learn better if as many senses as possible are involved. Singalong Cursive Handwriting taps into this by combining handwriting practice with songs, rhymes and illustration.

Each letter has its own song, which describes how it’s written: for example, a is represented by a rainbow, and the song, ‘Follow the rainbow, curl back round, up and down then flick.’ The idea is that your child comes to associate the song or rhyme with the letter, by listening to it while tracing the letter on screen with their finger. Then, when they come to write the letter on paper, they automatically recall the song, and this helps them form the letter correctly.

The app features all lower case letters, and groups them according to how they’re formed: for instance, the letters that start with a curved upwards stroke (a, c, d, g, o, q and r) are represented by a rainbow. There are three levels of difficulty, and your child is given a percentage based on how accurately they write each letter, helping them improve. 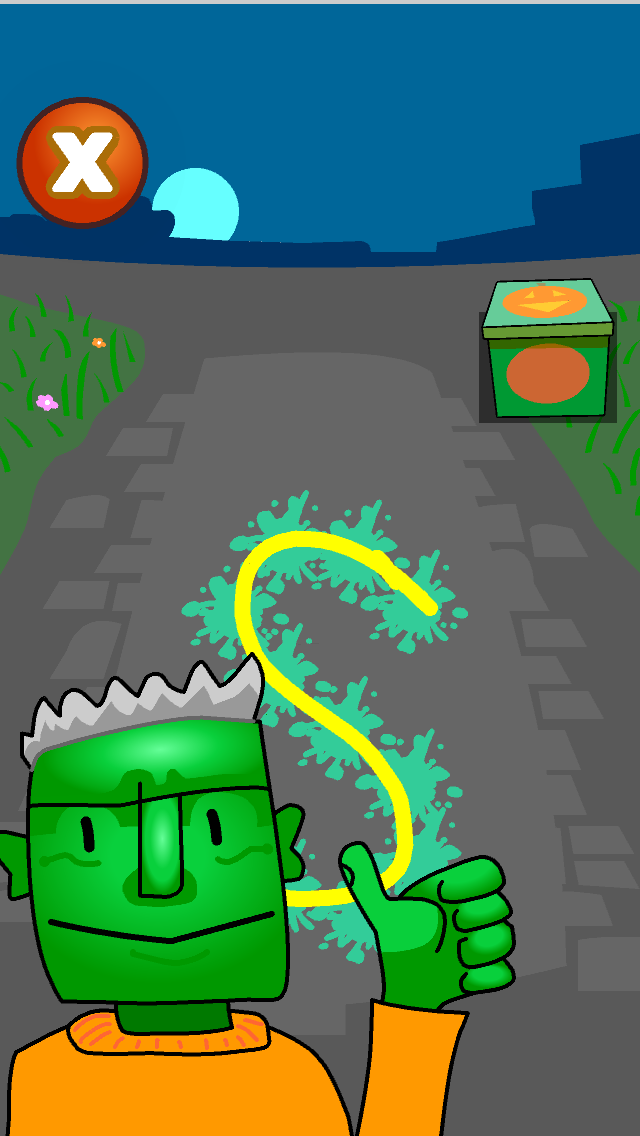 Making learning enjoyable is key to getting kids to practise handwriting. Spooky Letters is a really fun app that’s packed with child appeal, games-based learning and lots of rewards.

The app has three different alphabets for your child to learn to write: upper case and lower case print, and cursive. A friendly ghost shows them how to write each letter; your child then has to use their finger to move the ghost around the letter shape, popping each bubble on the way. Once they’ve formed it correctly, a monster pops up and invites them to open the box, where they discover a spooky object that starts with that letter, and a dot-to-dot drawing activity that improves fine motor skills.

There are further rewards to earn when your child completes each set of letters, in the form of puzzles and phonics-based spelling games, and you can access complementary printable posters and activities on the Spooky Letters website.

Best for children with handwriting difficulties 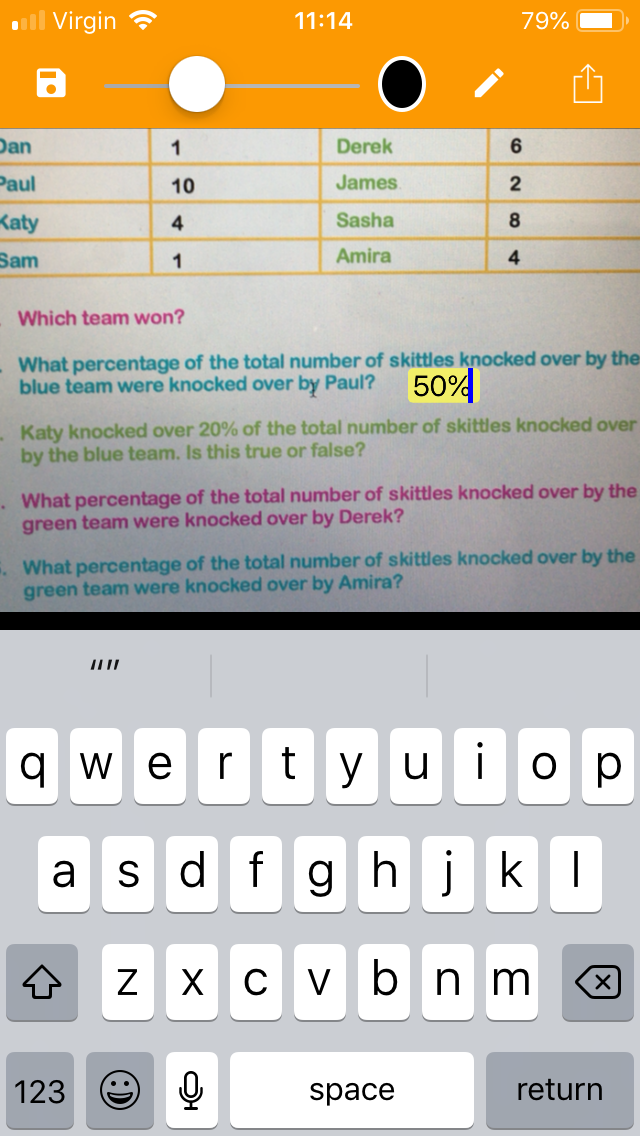 SnapType Pro is not a handwriting app as such, but it’s a godsend for children who have difficulties with handwriting, like dyspraxia and dyslexia, helping them complete school worksheets neatly and legibly and keep up with their peers where their learning difficulties usually hold them back.

The app allows your child to take a photo of their worksheet using their phone or tablet camera, or import it from anywhere on their device. They can then use their keyboard to type in the answers, or write/draw on their sheet using a stylus on the screen, and shrink their writing to the right size. They can then save their worksheet and print, email or share it with their teacher.

SnapType Pro also has the option to convert coloured worksheets to black and white to save ink when printing, and to change the background colour of their sheets to make them easier for reading: a useful tool for children with dyslexia and other visual processing difficulties.