Transform one substance into another and watch colours and textures change right in front of your eyes with our at-home, hands-on science activity suggestions from Dr Michelle Dickinson, prize-winning nanotechnologist, researcher and founder of Nanogirl's Lab.
Login or Register to add to your saved resources

These amazing and edible unicorn noodles can transform from purple to blue or pink!

Scientists use a scale called the pH Scale to describe the concentration of hydrogen protons in a solution. With 7 being neutral, a pH of less than 7 means the solution is acidic whilst a pH greater than 7 means the solution is alkaline. Anthocyanin changes colour depending on the pH of the solution it is exposed to. When it is neutral (or at pH 7) it is purple, but if it comes into contact with something acidic such as lemon juice, it turns pink. An alkaline solution, on the other hand, would make the anthocyanin turn blue, green or even yellow.

In addition to being a tasty snack, the unicorn noodles are also an edible pH meter! 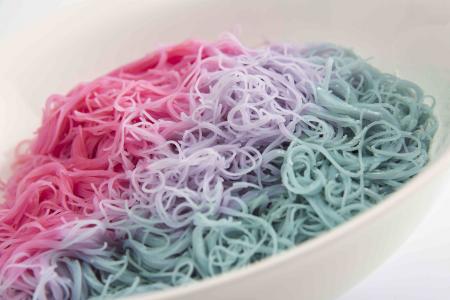 Hands-on science: Make your own butter

Do some hands-on experimenting before breakfast and you'll have some freshly-made butter to spread on your toast first thing in the morning!

This slime flows like a liquid but can be rolled like a solid – and the best part is that it’s edible!

The science behind edible slime
Cornflour or cornstarch is a starch made up of long chains of sugar molecules called glucose, which are joined together in a coiled up ball.

When exposed to heat and milk, the starch particles absorb water from the milk, causing them to swell. These swollen particles start to   press up against each other. This reduces the movement of the liquid, resulting in it thickening or becoming more viscous. Eventually the starch particles burst, freeing up long strands of starch which swell further and absorb the fluid outside the particles. This traps the remaining water in the mixture and turns it into a highly viscous gel or slime.

The slime flows like a thick liquid, but can be rolled around like a soft solid. The advantage of this recipe is that the slime is edible once you have finished with it! 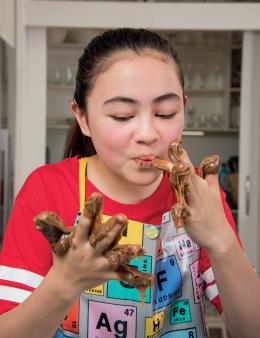 Created by a nanotechnologist and engineer, Nanogirl™ STEM Adventure subscriptions release a new science experiment every weekday. For every paying subscriber, a subscription is donated to a family who could not otherwise afford to take part. 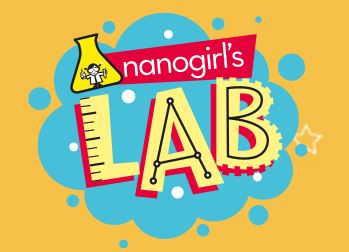