Like many skills, it’s best to start learning two languages as young as possible, but it’s not uncommon for parents to run into a few difficulties when raising bilingual children. TheSchoolRun offers advice and tips from parents who have first-hand experience to share.
Login or Register to add to your saved resources
Being able to speak two languages has numerous educational, social and economic benefits, particularly in an increasingly globalised world. For many parents of different cultures, it provides their child with a link to their family heritage.

Two years ago, six year old Morgan Giordano couldn’t speak a word of English. Born to Italian parents and raised in Italy for the first three and a half years of his life before his family moved to the UK, Morgan had hardly ever heard the language. Fast forward a year or so, and he can converse as fluently as any native child. He can tell you all about his favourite dinosaurs in his dinosaur book, or about how his dad’s snoring wakes him up in the night – all in clear, precise English with only a faint trace of an Italian accent.

Trial it for FREE today
His parents Bruno and Simona are learning English too, but they only speak to him in Italian at home. Morgan is now much more fluent and confident in English than his parents are, and even translates letters for them. So how did Morgan learn? He didn’t have any special classes or tutoring. He was sent to school like any other child, and learned the language through sheer necessity. “He was strongly motivated by being around other children, even if they spoke a different language,” his father Bruno explains. “Maybe the desire to communicate at all costs and the desire to play were decisive factors. Children are like sponges. If encouraged from when they are young, they can learn anything.”

The benefits of being bilingual

Figures suggest that around 70% of the world’s population speak two languages fluently, but raising your children as bilingual in the UK is still seen as pretty ‘special’ and rare. Bilingual children in the UK usually have at least one parent who speaks another language. But being able to speak two languages or more can have significant benefits, opening up a wealth of job opportunities for your child when they’re older. Often it gives them a strong link to another culture, usually one that is tied up in their family history.
Virginie Raguenaud is raising French and English-speaking twins and is the author of Bilingual By Choice: Raising Kids in Two (or more!) Languages. “Experts have shown that speaking two languages can greatly enhance students’ academic success," she says. "They can develop greater mental agility, stronger analytical and problem-solving skills, better concentration, sharper reading skills, and more creativity. “Research shows that children will grow up with a better sense of self when they are aware of their heritage and are active in the traditions of their cultures. Being bilingual can give a child a sense of pride and accomplishment… and a sincere appreciation for diversity.”

A study published in the scientific journal Behavior Research Methods also suggests that bilingual children are on average 6.5% more efficient in their thinking skills than monolingual children.

How to raise a bilingual child: One Parent One Language

There are two recognised methods of raising bilingual children.

The other is One Parent One Language (OPOL), where the parents speak the two different languages to the child from birth. Stephen Sangar has a Russian wife, and has raised his daughters, aged three and seven, to speak both Russian and English. Stephen only speaks English to his girls, while his wife has always spoken Russian to them. They could understand both English and Russian before they could talk, and can now speak both languages fluently.

“It’s important that children have consistency so, as far as is possible, we speak to them only in our native languages,” Stephen says. “This means, from a very early age, they just accepted that mum spoke one language, and dad a different one.”
Of course, it was easier for the girls to learn English because they hear it all around them. But as it is common for children to neglect the minority language, Stephen and his wife made an extra effort to expose them to Russian. “We have Russian satellite TV, DVDs and videos; we use Skype to call friends and relatives in Russia; we visit Russia, and so on,” he explains. “We also moved house a couple of years ago, and part of choosing where we lived was about finding a Russian community. So we have Russian friends, there is a Russian delicatessen and Russian school for two hours on Saturday.”

Bilingual challenges and how to overcome them

Raising bilingual children has its challenges, which will vary from child to child, and family to family.

In this case, Virginie says, parents need to show children the importance of the second language, which can be done by surrounding them with friends, relatives, and other children who speak the same language. Increased exposure to the language, in fun and interesting ways, will help immensely – as Stephen has found with his children. And perseverance should pay off. As Virginie says, “The key is for parents to continue to speak their native language even if the child’s response is not always enthusiastic.”

As with all aspects of parenting and teaching your child new skills, introducing bilingualism is not necessarily going to be easy. Stephen suggests, “You have to be consistent and repetitive, just like with one language. And, just like with one language, you will go through a number of years with no, or very little, feedback.” He also admits it can at times be very strange to have children who speak a language he doesn’t know. But for Stephen, any ‘issues’ are far outweighed by the benefits: “When they do start talking [the minority language] it’s wonderful, and knowing that they’ve had less input from external factors gives you even greater satisfaction.” Virginie agrees. “I have yet to master [some languages I have studied] and yet my two pre-schoolers can now tell stories, laugh, argue, tell a joke, and learn in two languages as if it were the most natural thing in the world. It takes my breath away.”

The PEaCH Project offers a free guide to raising a bilingual child on their website, as well as videos and lots of free language resources to download.

Play games and tackle quizzes on the free World of Languages website. Did you know that there are over 7000 languages spoken in the world?

The Fabulous Lost & Found is a language-learning storybook aimed at children aged 2-7, available in 30 languages including Spanish, German, Italian, Tagalog and Korean.

A Child of Two Worlds helps introduce dual-heritage children to their roots and rich cultural identities. Aimed at children aged 0-7 and designed to look like a passport with two sides, the book takes children on a personalised journey of exploration about both parents’ countries and local areas of origin, native languages, foods, sports and much more. 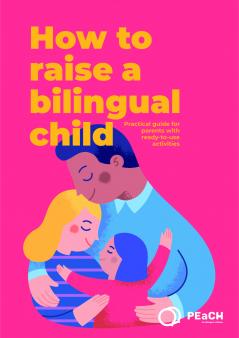 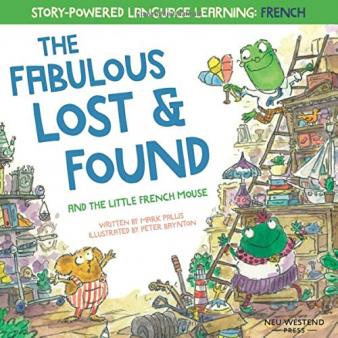 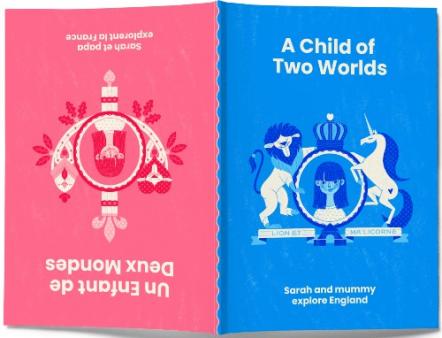