Money is the ultimate ‘real-life’ maths resource. Here's how to make the most of this tool to improve your child's maths learning at home.
Login or Register to add to your saved resources

Introduce money from a young age

Even in nursery money often features in role play games. Show your child some real coins and explain to them what the value of each one is. A good game for recognising coins is to put a pile of coins on the table and then give them five seconds to find a certain coin. You could also give them one of each of the different coins and ask them to put them in order, from smallest value to largest.

Once they are feeling a bit more confident with money, encourage your child's desire to play shop-keeper and help them make the game real by letting them practise paying for items in small shops. Learning the value of each coin takes time, but handling real money will help them get a feel for what each coin looks like and what it's worth. Help them to understand the price of things by giving them a budget (“You can choose a magazine for £3 or less”, for example).

In KS1 the money maths objectives focus on simple calculations. When your child has to add or subtract using money, encourage them to understand they can still use tools such as number lines or number squares to help; they can ignore the ‘p’ or ‘£’ units until they come to writing the answer if they want. (They might find it useful to actually see real money relating to the amounts in the calculation to get a concrete view of what is being asked, though.)

At this age, when the amounts they are adding tend to be reasonably small, stick to real rather than toy money whenever you can. Kids love real stuff – money especially! Using real money will make them feel grown-up and will add a imaginative play element to their work.

A key money objective in Key Stage 1 is knowing that there are often lots of different ways to make a given amount. Play a game to demonstrate this by having several purses, each with the same amount in, made up various ways, and get them to spot what you have done. Encourage them to do the same with a different amount.

It is really important that children know how many pence, how many 5ps, how many 10ps, how many 20ps and how many 50ps are in one pound. Again, use real money to demonstrate this, getting them to count out the coins, stopping when they reach 100p. For older children, ask them to investigate every possibility of making a certain amount, for example: 'I want to buy a toy train costing 90p. How many different combinations of 50ps, 20ps and 10ps could make this amount?' Children will need to think about how they can ensure that they have tried every combination. (This may mean some support from you, showing them how to do this in a certain order.)

Finding change as an objective is introduced in Year 1 and 2.

You’ll first need to check that your child understands what change is and why it is given. Again, with young children, this is best learnt through play, so set up shop and take turns to pay for items with more money than they cost. Encourage them to use subtraction and counting on methods to calculate change. So, for example, if something costs 30p and you pay with a 50p coin, they could count up in tens to see that 20p change is needed. If something costs 7p and you give them 10p, their number bonds knowledge will suggest that 10 - 7 = 3.

Children will also need to become familiar with working out change from £1. Give them a scenario where they want to buy a chocolate bar costing 30p. To calculate their change, they need to work out £1 subtract 30p. They could do this using a number line, or perhaps with ten 10p coins. Continue to practise with various multiples of ten (60p, 20p, 80p, etc.) then move onto other numbers (45p, 67p, 28p, etc.) You can then move on to finding change from notes such as £5, £10, £20, etc.

Use money to explain decimals

As children move into Key Stage 2 money is the ideal unit for practising decimal work. If your child is finding it hard to add 0.10 and 1.78 it can sometimes help to add express the decimals as money (10p and £1.78) to clarify the calculation.

Children need to be constantly reminded that decimals, money and measures are linked, for example:

It may help to show them a number line representation of these facts: 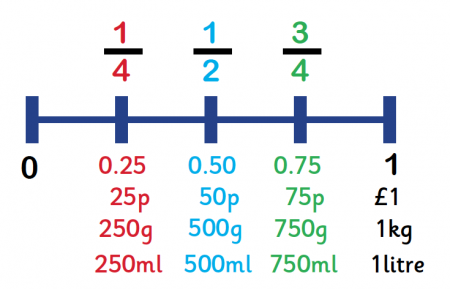 In Key Stage 2 children work on complex story problems, often with at least two steps to the calculations. When working through word problems you can help by encouraging them to underline key words and amounts that they’ll need for the calculation. A lot of what is written in story problems isn’t needed (for maths purposes, anyway!). So for example:

So the amounts are important, as are words such as ‘gave’ and ‘another’ that indicate ‘more’ (adding) and ‘spent’ (subtracting). Help your child recognise that we only need to know this information to solve the problem – not that the boy is called Raj, that he’s been given some pocket money or that his Nana thought he was good!

If your child finds this problem really difficult, it may help to have some money (real or plastic) to count out the amounts and demonstrate the process of adding and subtracting. They will then need to move onto working out problems like these without using money to help, for which they will need to be confident in written methods for the four operations (addition, subtraction, multiplication and division).