What are active and passive sentences?

The cat chased the mouse; the mouse was chased by the cat. Learn to identify active and passive voice in sentences and support your child's Year 6 grammar knowledge and understanding.
Login or Register to add to your saved resources

What are active and passive sentences?

A sentence is written in active voice when the subject of the sentence is performing the action.

A sentence is written in passive voice when the subject of the sentence has something done to it by someone or something. 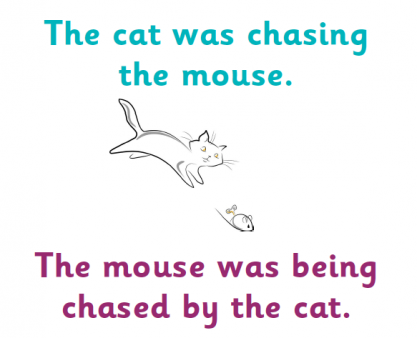 Active voice: The cat was chasing the mouse.
In this sentence, 'the cat' is the subject, 'was chasing' is the verb and 'the mouse' is the object.

Passive voice: The mouse was being chased by the cat.
In this sentence 'the mouse' has become the subject which is having something done to it by the cat.

How are the active and passive voice taught and used?

Here, the person who has done the graffiti is not known, so the sentence is written in the passive voice.

Year 6 children learn about the active and passive voice as part of their work on English grammar. They will be shown how to use it in their writing as a way of varying sentence structure. They may also be tested on passive sentences in the KS2 Grammar, Punctuation and Spelling test which Y6 children sit as part of their KS2 English SATs.