What are subject and object?

Subjects and objects in sentences, plus subject-verb agreement – primary-school grammar terms explained for parents, with examples.
Login or Register to add to your saved resources

What are the subject and object in a sentence?

All sentences contain subjects and verbs and some also contain objects.

The subject is usually the thing or person who performs the action of the verb.

The object is the thing or person that is involved in the action of the verb, but does not carry it out.

In the following sentence:

The man is the subject because he is doing something (eating a cream cake). The word 'ate' is the verb. The cream cake is the object. (Find out more about verbs and direct objects in our parents' guide to transitive and intransitive verbs.)

What is subject-verb agreement?

Tricky cases to watch out for:

How are children taught about subject and object in the classroom?

Since May 2013 children in Year 6 have taken a KS2 Grammar, Punctuation and Spelling test as part of their English SATs. Prior to this, teachers did not usually teach primary-school children about subjects and objects, but now it has become more important for them to know these grammatical terms.

This is an example question involving subject-verb agreement from the 2013 KS2 Grammar, Punctuation and Spelling past paper (download the whole KS2 English SATs 2013 paper for free from TheSchoolRun): 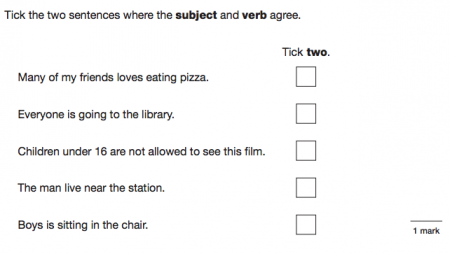 The question could equally be worded: 'Tick the sentence which is grammatically correct', however the question above requires children to actually understand what a subject is, what a verb is and the concept of them both 'agreeing'.

In this case, a child would need to recognise that the second and third sentences each have a subject which agrees with the verb.

Children are formally taught to identify the subject and object in a sentence in Year 6.

For more advice about grammar in primary school, including practical resources, visit our Grammar hub.