What are singular and plural?

Singular and plural nouns and how they're taught in primary school, plus how KS1 and KS2 children learn about the formation of irregular plurals and how to use possessive apostrophes.
Login or Register to add to your saved resources

What are singular and plural?

A noun names an object, person or place.

'Dog', 'balloon' and 'table' are singular nouns because there is only one of each of them.

If these nouns were plural, it would mean there were more than one of them. An 's' would be added to the end of each word to make the words 'dogs', 'balloons' and 'tables'.

To make most nouns plural we simply add -s.

There are exceptions, which children learn in primary school. The new curriculum does not stipulate when these words must be learnt, but most children are introduced to spelling irregular plural endings in Year 3 and Year 4. 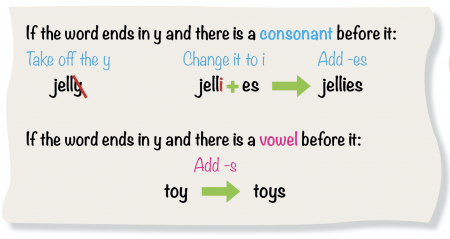 Adding an apostrophe to a word does not make it plural: apple's does not mean more than one apple (that's apples)!

Possessive apostrophes show that something belongs to someone or something.

When we write a sentence where something belongs to a singular thing or person, we use an apostrophe:

David's coat was on the back of the chair.

Children learn how to use possessive apostrophes for singular words in Year 2.

If a number of nouns own something, we need to use a plural possessive apostrophe:

Elephants' ears are large to help them cool down when they are hot.

Children learn how to use possessive apostrophes for plural words in Years 3 and 4.

How do teachers help children to learn about singular and plural?

Children will use their understanding of singular and plural in grammar and spelling lessons throughout primary school.