What is computational logic?

Thanks to computational logic, or computational thinking, we can work step-by-step to understand a problem and develop a solution. Children are first introduced to this skill in the KS2 classroom, as TheSchoolRun's Billy Rebecchi explains.
Login or Register to add to your saved resources

Computational logic is a term that describes the decision-making progress used in programming and writing algorithms; in other words, computational thinking is a way of looking at problems that allows a computer to help us solve them.

Computational thinking is made up of four processes:

Computational logic is at the root of everything done in computing and when students first start learning about writing algorithms they will look at something called a flow chart. A flow chart essentially allows us to define an algorithm by using two key components, processes and decisions. 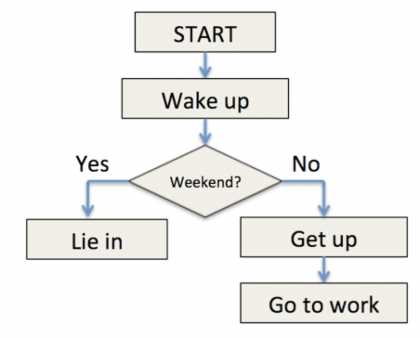 For example, you may have a decision in a flowchart that asks whether it is the weekend or not. We then have a control flow to our program using arrows that leads to two different processes. On one side of the decision is our yes option, which could point to a process telling us to have a lie-in. On the other side of the decision would be the no option, which would point to an option telling us to get up for work. A process is a rectangle and a decision is a diamond.

In KS1 your child will learn about the decision-making processes that are involved in computer science two ways.

Your child might be asked to draw the following path out using the keypad on the Bee-Bot: 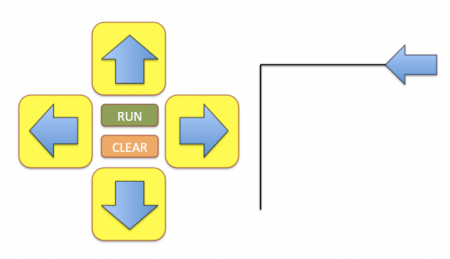 The large arrow shows the start position and direction of the robot, while the black lines show the path that the robot should take. We can use the keypad on the left to control our robot by pressing buttons in the correct sequence and then running the program.

In order to get the robot to follow the path we would have to:

This would make the robot follow the given path correctly when the run button was pressed.

This type of algorithm writing also requires a decision-making process that constitutes computational logic; the decision is made when the algorithm is written (deciding to turn left instead of turning right or going forwards again).

In KS2 computational logic is applied much more practically to the design of software.

The majority of primary schools use Scratch as a tool to teach their students about programming. Scratch is a visual programming language designed to teach the basic concepts required to start writing programs and computer games.

In a game there are a lot of decisions to be made. When discussing computational logic in a programming-specific sense, we refer to decisions as conditions. In their purest form, conditions are a test with different outcomes and programming a condition is commonly referred to as an if statement.

For this practical project we are going to look at some Scratch code that builds a very basic turtle robot that is able to draw paths on our screen based on some user input. You can run the project yourself on Scratch.

There are three user inputs that we are going to test for:

Let’s have a look at some of the basic Scratch blocks we are going to use: 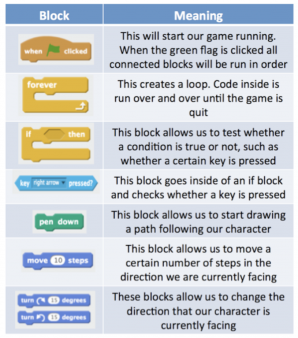 And now let’s take a look at the Scratch code which will allow our game to work: 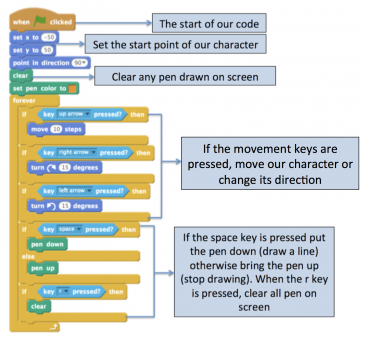 The code looks rather complex, however when we break it down step-by-step it is really quite simple.

The code above seems quite complex at first, however when broken down into individual steps and read through in plain English, it actually makes perfect sense. This is true of most conditions and your child will learn how to write computational logic by first breaking a problem down into plain English.

For example, you may ask what will happen when your character hits an enemy in the game. You have decided that this should restart the level and in plain English this would be written as: “if the player collides with enemy, restart the level”. This logic can then be written into a flow chart and then into Scratch code to make your game work.

How your child is introduced to computational logic in primary school

Year 1
Your child will be introduced to writing simple flow charts that include some basic decision making.

Year 2
Your child will use a turtle robot and will write computational logic to decided what command to run next.

Year 3
If using a visual programming language, students will start to implement very simple logic such as yes and no answers.

Year 4
Students will start to write code that can respond to a variety of conditions being true or false (if/then statements).

Year 5 and Year 6
The concept of computational logic will be expanded further to build complex programs and games that students plan and build themselves using Scratch or another visual programming language.