What is the grid method?

What is the grid method (or box method of multiplication)?

The grid method is a written method used to teach children multiplication. It involves partitioning numbers into tens and units before they are multiplied.

In some schools the grid method is referred to as the box method of multiplication because children learn to partition numbers into a grid of boxes.

Teachers often start teaching the grid method in Year 3 when showing children how to multiply a two-digit number by a one-digit number.  For example: they would demonstrate how to work out 37 x 5 by partitioning the numbers and putting them in a grid, then multiplying each one in turn:

The answers of each multiplication calculation (150 and 35) then need to be added, to find the answer, which is 185.

Children need to have the following skills before moving onto this next stage of the grid method:

Look at the following number sentence: 38 x 62 =
Each number would be partitioned into tens and units and placed in the grid. The numbers in the left-hand column would then be multiplied by each of the numbers in the top row and the answers written in the blank squares as follows: 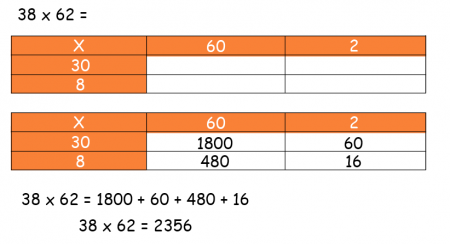 The four numbers would then be added, using whichever method the child is familiar with.

In Years 4 and 5, children are expected to be able to multiply a three-digit number by a one-digit number. This can also be done using the grid method:

482 x 6 =
Again, the numbers need to be partitioned up and put in a grid. Then the 6 is multiplied by each of the three numbers to make the answers. The numbers then need to be added to produce the answer.

Multiplying amounts of money with the grid method

This method can be useful to children in Year 3 and 4 who are having to work out, for example, the cost of 3 books, each costing £2.63:

It is very important when using the grid method to multiply amounts of money that children remember to keep writing £ or p next to the numbers so that they do not get confused about which unit of money they are dealing with.

If a child was asked to multiply 5.9 x 3, they could do this using the grid method in the following way:

In Year 6, children are expected to multiply numbers of up to four digits by two-digit numbers. If they used the grid method to do this, they would do it as follows:

However usually, at this stage, a child would use long multiplication (also called column multiplication) as a quicker method for these larger numbers.