What is ‘magic e’ or a split digraph?

The way children learn to spell using phonics and phonetic terminology can cause utter bewilderment to parents trying their best to help at home. Primary teacher Phoebe Doyle is on hand to explain the ‘magic e’, or split digraph.
Login or Register to add to your saved resources

Helping your child learn to read with phonics is all very well at the beginning: “c – a – t. Cat”. Simple. But, as the English language is so notoriously complicated, it’s inevitable that learning to read and spell becomes more complicated too as primary students move on to learning more complex spelling patterns. One common spelling pattern is the ‘magic e'.

The proper name for ‘magic e’ is ‘split digraph’, and it means that a vowel sound has been split. In fact some teachers no longer use the term ‘magic e’ as they feel it can be confusing – the ‘e’ isn’t magic, it’s actually doing a job. That said, some teachers like the term as it gives a fun element to spelling, which children enjoy.

A digraph is two letters (two vowels or two consonants or a vowel and a consonant) which together make one sound (as in the words tail, boat, found or read).

When a digraph is split by a consonant it becomes a split digraph.  For example:

When a ‘magic e’ end is added to certain three-letter words the 'e' reaches backwards over the consonant to change the sound of the vowel before it. For example, read the following words and notice the difference in the vowel sound:

When saying the words with the ‘e’ you’ll note that the vowel sound has been changed. It’s become a long vowel sound as opposed to a shorter one.

The ‘magic e’ or ‘split digraph’ used to be known as a ‘silent e’, but the term has been largely replaced as the ‘e’ can’t be disregarded when reading in the same way that ‘k’ can in ‘know’, for instance.

However, there are some occasions when the ‘e’ at the end of the word could be considered silent – for example, in ‘come’. Think how differently we say ‘come’ to ‘cope’ – in ‘come’ the ‘e’ isn’t working its ‘magic’ and making a long vowel sound.

Adding a suffix – drop the ‘e’

An interesting spelling rule to learn about the ‘magic e’ is if you add a suffix that begins with a vowel then you usually take the ‘e’ away. For example:

When do children learn about split digraphs in school?

From the time they’re beginning to read, children are likely to come across words containing split digraphs. If your child goes to a school where they split children across the year groups and put them into ability groups for phonics, then your child could be learning this any time from the beginning of Year 1, but will continue to revise and learn the concept into Year 2.

How will my child learn about split digraphs?

At school, your child will do various phonics activities and games to help enforce their understanding. In the last 10 years there has been a more visual and active approach in some phonics lessons; these are some of the kinds of phonics exercises they might do in the classroom. 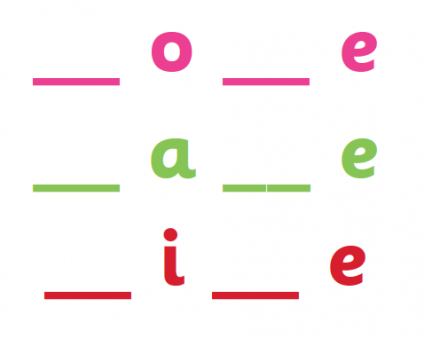 Find out more about the phonics sounds your child learns, how to practise the sounds at home and find worksheets and activities to support your child's phonics learning.