Programming languages are used to teach a computer how to achieve a given task. They allow programmers to implement the algorithms they have written into a program that can be run on a computer.

There are two main types of programming languages: visual and textual.

In KS1 your child will be introduced to a very simple programming language, normally one that is used to control a turtle robot (a kind of programmable floor robot).

The majority of turtle robots will have four different functions that can be used to control the robot, as well as a run option and a clear option: 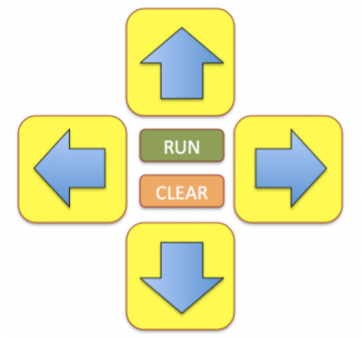 If you were given a set path for your robot to follow, you would have to program the robot using the arrow keys in the correct sequence, before hitting the RUN key to have the turtle robot perform the instructions.

If you made a mistake you could use the clear key to remove all of the instructions assigned to the robot's memory, so that you could start fresh. By making sure you programmed the robot correctly, it should complete the given task when run.

A turtle robot often used in KS1 is the Bee-Bot and a commonly used programming task would be to make the robot draw numbers by following a path. Look at the example of a path below, and the corresponding instructions required to draw the number using the keypad: 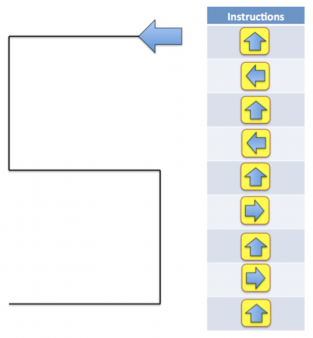 In the above image you can see that we have been given a path to draw the number 5 or the letter S. From out starting point at the top right, facing left, by completing each of the steps in our program one at a time the end result would be to draw out the path of the number 5: 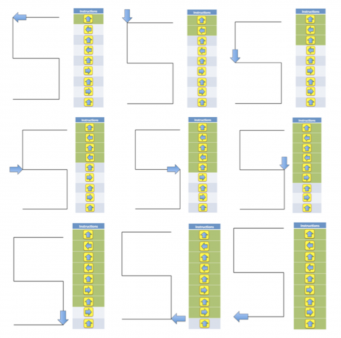 Programmable floor robots are easy to use: directional keys send them forward, back, left, and right and they usually beep or flash when they have completed each command so children can follow through a program they've created and watch it step by step.

Scratch allows us to use very basic building blocks and connect them together to create a computer program.

Scratch is mainly designed to help your child learn the basics of programming through building games. With a good understanding of programming principles Scratch can allow programmers to build extremely realistic games using advanced and accurate physics simulations.

Get started using Scratch: you can sign up for an account and access your projects from anywhere and the best thing is it’s completely free. The forums are full of helpful hobbyists and educators who will be willing to help you debug your programs.

Although textual programming languages are not generally taught as part of the primary computing curriculum it can be useful to understand a little about how they work.

In order to show some of the complexities of Python, here is some Python code that moves an arrow in a straight line: 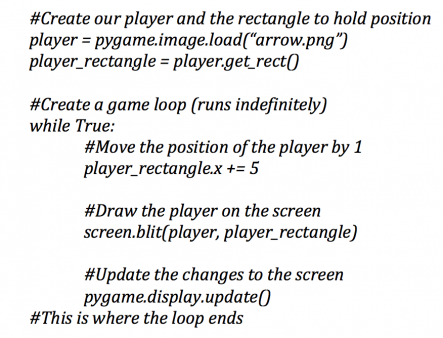 Extremely versatile and rewarding in the long-term, but rather too complex for most beginners!

Another issue with learning to program in Python is something called syntax errors.

When building in Scratch it is impossible for your code to not run. You could have errors in your program logic, for example doing an addition instead of a subtraction, but the code would still start; your result would just be incorrect. In Python, since everything is typed instead of being dragged and dropped, it is possible to write code that the computer does not understand. In a program that has hundreds of lines of code identifying these small mistakes can be very time-consuming and requires a lot of patience and practice and this is why generally programming in textual languages is not introduced until KS3 or even KS4.

Please note that the following guidelines for what is taught in each primary year are for guidance only and may not be representative of the way computing is taught at your child’s school.

Year 1
Students will be introduced to the basics of programming with a sequential programming robot such as the Bee-Bot.

Year 2
More complex programming tasks will be given, such as drawing out numbers and/or letters on the floor by programming a turtle robot.

Year 3
Children will continue to develop their understanding of programming by using robots, possibly moving on to using more complex robots. In some schools a visual programming language will be introduced.

Year 4
Students will be introduced to a visual programming language and will start to make use of computational thinking to write code that uses loops and if statements.

Year 5 and Year 6
Students will start to develop independence in a visual programming language, writing their own code rather than just following instructions and testing out ideas. Some students may start to learn a textual language.