What is abstraction in computing?

Abstraction is an important part of programming. Find out how children are introduced to this tricky concept in KS2 computing and how you can develop their understanding at home.
Login or Register to add to your saved resources

Some of the concepts and theories used in computer science are incredibly complex. As an everyday user of a computer, however, it isn’t necessary to understand how all of these complex processes work, as you are given a mouse and keyboard that allow you to access all of the functions of a computer. The process of hiding the complexity of a computer system is known as abstraction.

Abstraction in KS1 and KS2

Abstraction is a highly advanced concept that won’t necessarily be included at KS1 in the computing curriculum, however the basic principles of abstraction will be learned in Early Years regardless of subject.

Take the concept of abstract art, defined as being art that represents the world using alternative methods such as use of colour, rather than being representations of real-world objects. To demonstrate this point, look at the following images: 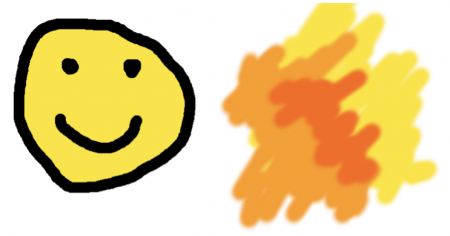 You may not be able to tell immediately, but both of these (crudely drawn!) images are being used to represent happiness.

You may now be wondering what on earth has this got to do with computer science!

Computational logic is at the heart of everything a computer does, making a number of decisions that tell a computer what to do and when to do it.

This is abstraction in computer science: hiding the complex methods used by a computer to work and providing an easy way for humans to use it.

In programming this is extremely important, as without abstraction every programmer would have to understand and be able to manipulate binary arithmetic, a very complex science, which would put up a very large barrier to entry for prospective programmers. With the growth of computing worldwide there has been a huge increase in demand for people able to write code and build programs. If every single one of these programmers had to understand binary arithmetic in detail then it would be very difficult to train prospective coders and we would have a worldwide shortage. Therefore, abstraction has been used to hide the complexity of writing code to make it more accessible to the everyday user.

At KS1 abstraction is often taught with a strong link to art, often making use of drawing materials or even clay to teach the key concepts.

An abstraction activity done with KS1 students is often completed in pairs or groups. Each student is given a piece of paper and some colouring pencils and an object to draw. Before the activity is started it will be explained to the students that they have to try and draw/model their object using as few details as possible, whilst still allowing their partner to try and guess what the object is. Look at the image below; can you work out what it is? 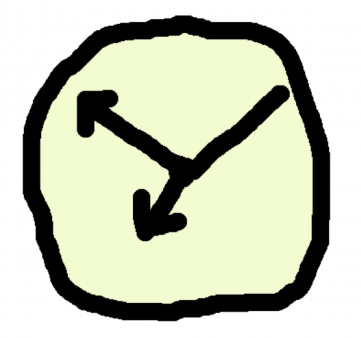 This is of course a clock, as you may be able to tell from the circular(ish) shape and the hands stemming from the centre. There is one crucial detail missing from this drawing: numbers or any reference point for what the time is or where the hands are pointing. However, this helps to demonstrate a key principle to students, which is that you don’t need to reproduce all the individual details or parts of an object in order to understand what that object is or what it is doing.

In some schools the activity given above will actually be used as a KS2 activity and abstraction may be entirely removed from the curriculum at KS1. If that is the case then it is likely that your child will not be learning much more about abstraction until they reach later KS2 stages or even secondary school.

Your child may be given real-world examples of abstraction to help identify what abstraction means to a computer scientist.

One example might be that of a driver in a car. In order for a driver to operate a car properly, they must understand the purpose of and how to use a number of key components: the steering wheel, gear stick, accelerator, clutch, brake and ignition. The driver has to know that pressing the clutch allows them to shift gears, and that releasing the clutch engages the wheels. They need to understand that the accelerator increases the power provided by the engine, and that the brakes are used to bring the car to a stop and prevent it from moving. They also have to understand that the ignition is used to power the engine on and that the steering wheel is used to guide the vehicle in the correct direction for travel.

Without at least an understanding of all of the things above, a driver will not be able to operate a vehicle either effectively or safely. However, by using all of the above components in a car, a driver is actually using abstraction. They can operate the car to make it move and stop, but they don’t necessarily understand that the engine runs by exploding small quantities of petrol in pistons to turn a drive crank. They don’t need to know that the brakes work by pushing a pressurised fluid through a tube to engage the brake callipers, and they don’t need to understand that the tires have friction with the road allowing the car to turn corners or continue in a straight line.

Unless you have a degree in computer science or have worked in industry for several years, when using your computer at home you probably don’t understand how binary numbers are used to represent all of the information held on your computer. You probably don’t know much of the science behind how your computer connects to the Internet, or how data on the hard drive is passed through the circuits to be displayed as information on the screen. And the important part here is that you don’t need to, any more than someone driving a car has to understand how the engine works beneath the bonnet.

The designers of motor vehicles make them simple to use for the majority of the population, and the designers of computers do much the same thing with their machines.

If you look into the past (pre-1985), all computers used to look something like the one in the image: lots of green text on a black screen, quite difficult to use and even more difficult to understand. 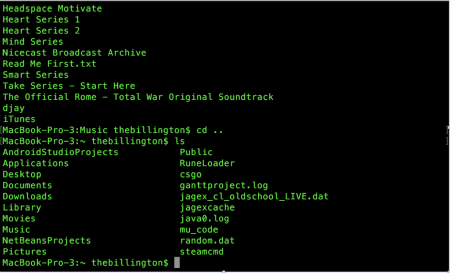 Nowadays we have a much nicer visual way of using our computers, by pointing and clicking with a mouse rather than typing text on a screen. Deep down however, computers still run exactly the same as the always have, the thing that has changed is the way that we interact with them. They have been made easier to access and easier to use, allowing more of the population to get started using a computer. And this has extended to other devices as well. Think how easy it is for a very young child of even 18 months to pick up an iPhone and start playing games.

Abstraction has allowed computer designers to simplify the way that people interact with computers, which has allowed for the explosion of devices and users that we have seen in the last 20 years.