Prepositions are some of the most common words in the English language. We explain how your child will learn to use them in primary school and why time connectives are so important in non-fiction writing.
Login or Register to add to your saved resources

Prepositions are linking words in a sentence. We use prepositions to explain where things are in time or space. Prepositions tell us where something is (for example, beside, under, on, against, beneath or over) or when something is happening (for example: until, during, after, before or more specifically 'on Christmas Day', 'at twelve o'clock' or 'in August').

Prepositions usually sit before nouns (or pronouns) to show the noun's (or pronoun's) relationship to another word in the sentence.

When and how are children taught about prepositions in primary school?

In the Foundation Stage, children may be asked to describe the position of an object, using words such as next to, under, in, on, opposite, beside, etc. This will help them expand their vocabulary which will in turn improve their speaking and writing.

According to the national curriculum (revised in 2014), children are formally introduced to prepositions and the role they play in a sentence in Year 3.

In KS1 and KS2 children use a greater variety of prepositions, sometimes referring to them as time connectives or conjunctions.

Prepositions in the Y6 'SPAG' test

Children will need to know about the different kinds of prepositions and how to use them by Year 6 in preparation for the KS2 Grammar, Punctuation and Spelling test.

They may be asked a question similar to the following: 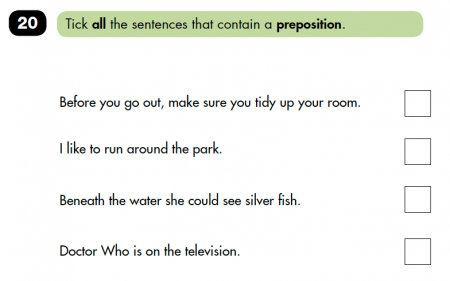 In this case the last three sentences should be ticked (the prepositions are around, beneath and on). In the first sentence the word 'before' is not used as a preposition but as a subordinating conjunction (because it introduces a clause, Before you go out).