What is an exclamation mark?

Understand how to punctuate exclamation sentences and how to communicate sudden and strong emotion in writing with our parents' guide to exclamation marks.
Login or Register to add to my wishlist

What is an exclamation mark?

An exclamation mark is a punctuation mark which looks like a straight line with a dot underneath it. It is used to show that an exclamation, an interjection or a statement sentence has finished.

For the purposes of the primary curriculum, children in Key Stage 1 are taught to punctuate exclamation sentences using an exclamation mark at the end, and will be expected to demonstrate this knowledge in the KS1 SATs grammar paper at the end of Key Stage 2.

As children progress through school, they will be encouraged to punctuate some statements and interjections with exclamation marks as well. Exclamation marks are used at the end of statements when a strong emotion is being expressed (good and bad – surprise, excitement or delight, but also anger, fear or shock), and tell a reader to add emphasis to a sentence.

They might also suggest that a speaker is shouting. For example:

What is an interjection?

An interjection is a word on its own, or used as part of a sentence, that expresses sudden emotion such as surprise, joy or enthusiasm. Interjections are usually used at the beginning of a sentence, and when used on their own can be a sentence in their own right. For example:

When are exclamation marks taught in the primary calssroom?

Further emphasis is placed on exclamation marks again in Year 2, when children will be expected to identify exclamation sentences for the KS1 SATs, and be able to punctuate them accurately along with commands and questions. Here is an example of an SATs-style exclamation mark question: 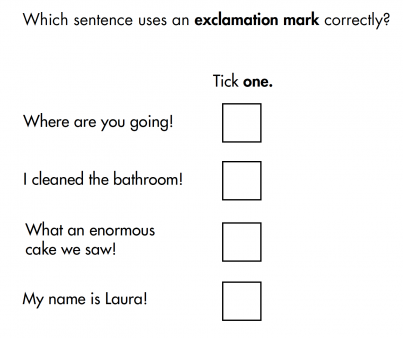 Children will again be tested on their ability to demarcate questions, exclamations and statements accurately in the KS2 SATs Spelling, Punctuation and Grammar test.

It is not an explicit requirement for children to be able to write exclamation sentences or use exclamation marks within their writing to reach age-related standards, however most teachers will expect to see them used accurately in children’s writing once they reach upper Key Stage 2.

How are exclamation marks taught?

During Year 1, exclamation marks will usually be taught by through drama and reading aloud.