What is an exclamation sentence?

Understand the primary curriculum definition of an exclamation sentence with our parents' guide to primary-school grammar.
Login or Register to add to your saved resources

Sentences can be statements, commands, questions or exclamations.

An exclamation is forceful statement which expresses high levels of emotion or excitement.

For the purposes of the primary curriculum, exclamations always begin with ‘what’ or ‘how’ and are usually punctuated by an exclamation mark ( ! ).

An easy way to think of exclamation sentences is to think of fairy tales. For example, Little Red Riding Hood might speak in exclamations like these:

Examples of exclamation sentences are:

When are exclamations taught?

Teaching exclamation sentences starts during Key Stage 1. Children will be taught the difference between a statement, a question, a command and an exclamation, and how to punctuate them.

In Year 1, children are taught the difference between ‘yelling, telling and questioning’ (or exclamations, statements and questions).

In Year 2, the year in which children sit their KS1 SATs, the correct use of exclamations and exclamation marks is reinforced. An example of the type of question about exclamations children might be asked during Year 2 SATs is: 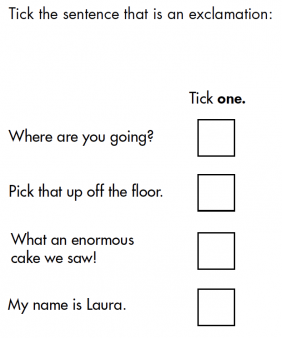 In later year groups, children will learn to use exclamation sentences in their writing.

In Year 3, they might practise writing exclamations as part of direct speech (this is a progression from simply using full stops within speech).

By the end of KS2, children in Year 6 might be tested on exclamations during their Spelling, Grammar and Punctuation paper in SATs. For example: 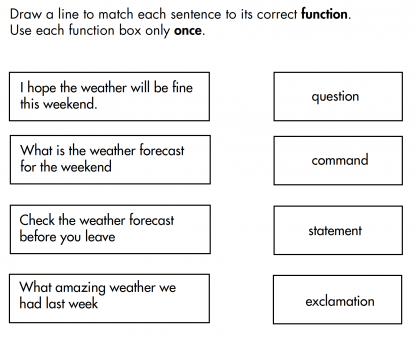 How are exclamations taught?

In Year 1, when they are first taught exclamations, children will complete verbal activities, such as role-play and acting out short scenes from books, in which the teacher might ask if the sentence is telling us something, asking us something or if a character is shouting it or perhaps showing lots of emotion. This will be followed by worksheets, usually identifying whether a sentence is ‘yelling, telling or asking’.

In Year 2 there will be more time spent focusing on identifying what type of punctuation a sentence requires to show that it has ended, with some children attempting to show that a character is ‘yelling’ or showing emotion by using an exclamation mark. Speech marks wouldn’t be required at this point as the use of speech marks is a Year 3 grammar objective.

The definition of an “exclamation sentence” as a sentence which must start with either “how” or “what” and include a verb is very specific to the primary-school grammar curriculum.